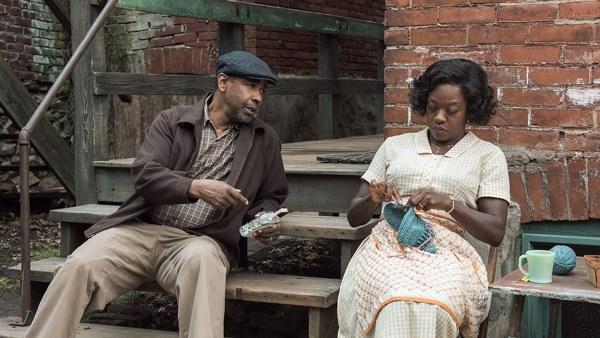 Denzel Washington was asked at a National Theatre-hosted Q&A about his latest film, Fences, how after such a lengthy and successful career he still manages to find the truth and passion in each character he plays. His answer was, in short, that he has to get himself out of the way, and remember that whatever part he is playing, it is not about Denzel. As an actor – although the same is arguably true of any role in life – if you are too busy watching what you’re giving to any situation, he said, you’re probably not giving anything at all. This film is a masterclass in that approach to the craft, on his part and that of his co-star, Viola Davis.

August Wilson’s 1987 Pulitzer Prize- and Tony Award-winning play is about the domestic life of Rose and Troy Maxson in 1950s Pittsburgh. James Earl Jones played Troy in the original production. Washington took the role in the play’s 2010 Broadway revival (which won another 3 Tonys) and reprises it in this film adaptation, which was scripted by Wilson himself before his death in 2005 and which Washington has also directed, in keeping with Wilson’s insistence that any film version was to have a black director. In fact, the playwright’s canon of work has now been entrusted to Washington, who has committed to produce an adaptation of each of Wilson’s ten plays.

Washington decided to take five of the seven main cast members, including Viola Davis, with him from the Broadway stage to the screen. He calls them the core band, and highlighted the musicality (metaphorically – there is no soundtrack) of the film, the rhythms that flowed naturally between the cast, the riffs that they could pick up from one another. It was a decision that is justified – there is not a weak performance, and the actors have a familial chemistry. They performed the play 114 times on Broadway, and to be able now to hold the stage performance in one hand and the film in the other highlights the extraordinary feats that have been accomplished in both. Consider the emotional energy of the film, particularly that exerted by Davis, and wonder at how that was released night after night. But also marvel at how, having reached the end of the story so many times, Washington and Davis were able to recreate convincingly on film the freshness and love of Troy and Rose’s marriage that is so important for the audience to feel at the beginning of the story in order for them to follow its emotional arc.

The entirety of the play takes place in the Maxsons’ back yard; that location still hosts the majority of the action in the film, but Washington moves some scenes elsewhere. It’s interesting to hear him acknowledge that in doing so he ‘stacks the decks against Troy’ – he mentions a particular scene in the film in which Troy finds Rose waiting for him outside his place of work. The shift adds an extra potency to the course of action Troy chooses to follow at the end of their conversation; Washington is right to point out that the audience’s sympathies might have been balanced differently had that scene been situated elsewhere.

Washington has been nominated for a leading actor Oscar for his performance, and deservedly so; having heard him speak so thoughtfully about his directorial choices makes me wonder if the Academy has made a mistake in not considering him in that category, too. Viola Davis’ supporting actress nomination is baffling only because she seems worthy of leading actress billing. Much has been made of her status as the most nominated black actress in the history of the Oscars, and there can be no complaints about that. Her performance in 2008’s Doubt, which also earned her a supporting actress nod, was sensitive and sensational, and worthy of the win. In Washington’s words: ‘It’s her turn. She better win.’

Fences not a perfect film. It feels as long as it is (nearly two and half hours), which is largely because the first half of the film struggles to escape its theatrical origins. Verbose, context-defining dialogue, no matter how well delivered, is always going to weigh heavily on a cinema audience. But at the halfway mark, the gasp-inducing moment that changes the characters’ trajectory affects the audience just as drastically. From here, the film is a powerful and insightful character study, which admittedly would not have so great an impact had the first half of the film not worked so hard to establish the boundaries which are subsequently crossed.

This is a visceral portrayal of what happens when one person who sees life as a black and white matrix of responsibilities, duties and what is owed to whom, hurtles into the conviction of someone who chooses to see and try to enhance the colour in every situation. It would not be implausible to see in the story a confrontation of a rights-based view of the world and one grounded in virtue, but that would be to risk talking in abstraction about an expertly told and painfully human story.