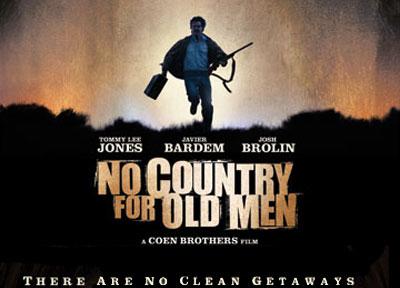 
If it weren't
for the guilt about carbon, there are certain points in the year when I yearn
to get a cheap flight to somewhere in the middle of middle America, hire a
suitably languorous vehicle, and drive aimlessly around the vast spaces,
stopping pointlessly at whatever isolated communities I find along the
way.

The Coen
Brothers' No Country for Old Men
intensifies this wanderlust - it is a film filled with loving images of
small-town America: elderly farmers in
Casey-Jones overalls drive pickups filled with chickens; preposterously grand
(but slightly seedy) three storey hotels sit in flat, half-empty one-horse
towns; polite, middle-aged ladies in fashions fifteen years out of date file
their nails in the management offices of trailer parks. But it is also a film filled with images of
casual and brutal violence: one of the
protagonists' preferred modes of killing is with the slaughterer's bolt-gun (a
subtle reference to Driller Killer,
perhaps): you might be filing your
nails one minute, you might be face-down on the desk, with your blood gently
oozing over the faux pine-finish floors the next.

The opening
sequences of the film indicate exactly how the next two hours will unfold. Firstly, there is the landscape: the camera ranges slowly and ravishingly
over the desiccated vastness of Texas - big, empty, dry. The sun at this point in the film slants
sideways across this emptiness, catching a hill here, a boulder there (is it
dawn or dusk you ask yourself). Secondly, there is evil, persistent, ruthless,
a-human. This element of the story
begins with an anecdote told by local sheriff Ed Tom Bell (Tommy Lee
Jones). A boy he sent to the electric chair
a few years previously had admitted to no remorse, had no fear of punishment,
and talked blithely of spending eternity in Hell. Worse, he had decided that the ability to kill - the desire to
kill - was part of who he was: if set
free, he'd just do it again.

One other man
set in this bleak beauty in whose nature it is to kill is Anton Chigurh (Javier
Bardem). Shortly after the prologue, we
watch the orgasmic pleasure on his face as he strangles a naïve local deputy
sheriff. And it is Chigurh's dark force
that drives through the film, relentlessly. There is something uncorruptible about this malevolence: he is the idea
of evil, he is 'a ghost', he 'has principles which transcend money or
drugs'.

So is raised one
of the central questions of the film: how can we respond to such evil? 'How,' asks Tommy Lee Jones' Sheriff Bell at one point 'do you defend
against it?' And the pessimism of the
film seems to lie in its contention that to take action against it risks
mirroring the evil itself, that in so doing, 'a man would have to put his soul
at hazard.'

It's almost as
though the film sets out to destroy four icons of American masculine purpose:
the sheriff, the cowboy, the outlaw and the Vietnam Vet. The sheriff is old and
despairing (even in his wisdom), the cowboy and the soldier become sucked up in
forces outside their control, and the outlaw is re-made into a dark angel -
elemental, dispassionate and disconnected. What intensifies the sense of doubt, perhaps even near despair, is that
the edges between these icons seem to have been deliberately blurred: the outlaw slaughters people as a rancher
kills steers, the cowboy hunts deer with a soldier's sniper rifle. All identities become confused in the
compelling vortex of evil, as tactics mirror each other, good purposes become
lost and only a casual malevolence has direction, stalking relentlessly towards
its own existential goal, following a series of blood-trails.

The script
explicitly raises theological questions: I am sure I heard Lee Jones ask his secretary 'What is it Torah says
about Truth and Justice?' I know she
replied that 'we dedicate ourselves daily anew'. It is centrally a story about mission, purpose and justice. We wait for judgement to come to Anton
Chigurh. But it doesn't. It is a fact
which mirrors one of Lee Jones' final lines in the film 'I always felt as I got
older that God would come into my life - he didn't'. All told, it seems fitting that the final frames of No Country for Old Men are a black
screen.

An Islamic Declaration on Climate Change

Flashbacks of a Fool