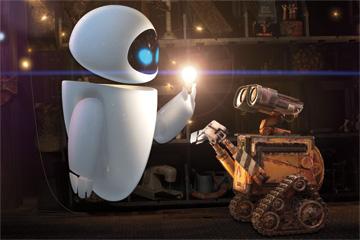 
Pixar’s latest offering, WALL-E, tackles the issue of climate change and humankind’s poor stewardship of the planet in a way that will appeal to adults and children alike through the relationship between two unlikely robots and their encounter with humans who have for a long time been unaware of anything outside of themselves.

Set 700 years in the future, the film opens with Earth deserted, save for WALL-E, a Waste Allocation Load Lifter – Earth class unit, a solar-powered, misshapen robot whose function is to retrieve and recycle into compact blocks the waste that is strewn across the planet, and his companion, a cockroach (who seems impervious to destruction). The earth has been ‘abandoned’ by human beings because the waste and rubbish they generated became so overwhelming that they were no longer able to inhabit the planet – so they left, but forgot to turn WALL-E off, and he has continued obeying his ‘directive’ of cleaning up the rubbish and transforming it into familiar urban architecture.

In the 22nd century, the mega-corporation BnL that manufactured everything had become the ‘government’ and was responsible for creating the starliner Axiom – a sort of futuristic Noah’s Ark with deluxe room service – where all human life retreated in comfort for five years, whilst – the mega-corporation said – Earth would be cleansed and they would return.

But this five-year mission has taken a lot longer, and 695 years later people have still not returned to Earth – but that hasn’t affected WALL-E who in all that time develops some sentience and relationship with his cockroach friend.  One day WALL-E’s regular life is interrupted by the arrival of the sexy, modern (Apple-like alternative) EVE (an Extra-terrestrial Vegetation Evaluator) who is a probe sent to Earth by the Axiom. WALL-E presents EVE with the gift of a small, frail, green plant he has found, and their developing relationship constitutes the first part of the movie.

When EVE is due to leave, WALL-E decides to follow and the two are transported to the BnL starliner Axiom. BnL stands for BuyNLarge (representing I suspect, Consumerism and Greed – two of the vices the film sets out to criticise) and it is difficult to ignore the comparisons with America and the West’s lifestyle, exaggerated for effect here, with the human beings excessively obese.  The robots and technology are effectively slaves for the humans – who do not even have to walk anywhere, or even stand-up, as everything is done for them by the machines. We see clearly how far life on board the Axiom has deteriorated, bereft of culture, autonomy and community, and how WALL-E, who longs to hold EVE’s hand and mimic the behaviour of his favourite musical Hello Dolly!, and EVE, who wants to protect WALL-E from the other robots running the Axiom, are in a way the the most ‘human’ characters in the film.

The movie shows the humans being jolted back into reality by WALL-E’s presence – for the first time looking out of the window of the ship, or even looking up from their 24/7 TV monitor to notice things around them, they become aware. To overcome BnL and the consumerism and greed that they represent, the ship’s Captain must override the auto-pilot and regain control. Indeed it is only through the virtues of ‘self-control’ and responsible decision-making that human beings can recognise and regain their humanity – otherwise we see how they remain slaves to the machines. The movie shows the falsehood in the often imagined utopia of our mechanical and technical advancements, and confirms that in the end humanity’s true glory is manifested not in machines and efficient automation but in the more complicated and loving areas of relationships and community, in awareness of each other and the environment that supports us all.

WALL-E represents hope: hope that in the face of seemingly insurmountable and growing chaos and destruction caused by human waste and abuse of the Earth, one individual can make a difference; hope in life finding a way to survive; and hope that human beings can care enough – even after so much exposure to the deadening effects of consumerism and greed – to change their ways and work towards a way of life that sustains rather than destroys the earth.

Some might question how much an animated movie can really say – especially one with as little dialogue as WALL-E has (for most of the first part of the movie only two words are repeated). But WALL-E tackles some of the great issues of our time in an accessible, enjoyable, and always thought-provoking way – and if any story has a moral worth hearing in today’s world, this is it.  Somehow, in the wordlessness of the film it is possible for everybody to be touched: words are not needed as this is a universal story of a universal problem – one for which we are all responsible and by which we are all affected.

Pleasingly surprising, it has to be said, to find such a touching story, and such serious values, amongst so much rubbish!

Advent Examen: 2. The grace to know myself

Between doctrine and discipleship: reflections on the Annunciation

An itinerary for Lent: Sunday gospels