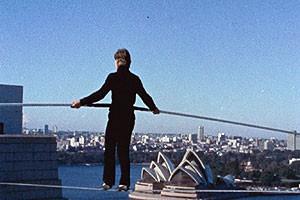 
The wire-walker’s ankles look feminine.  Black slippers, black trousers beginning six inches higher, between them a band of skin exposed to the breeze.  His torso is bare and is the physique of the gymnast, muscles tensed as he supports a long pole extending away to the left and right of him.  The toes of his left foot meet the heel of his right foot; he lifts the left up, places it in front of his right, his toes and the thin base of the slipper grip to the wire on which he is suspended, ten feet above the grass.  His face does not recognise the delighted applause of his friends watching below; instead he lies back on the wire with the pole upon his thighs balanced, and grins.

Man On Wire opens with a group of friends in their mid-twenties setting off to break into the World Trade Centre, leaving behind them a televised Richard Nixon hoping to persuade the world that he isn’t a crook.  Phillippe Petit, the wire-walker, now nearly sixty, runs off a stream of crazy images – monsters, Death, golden cages – as he tries to recapture the exhilaration that le coup was about to happen.  The film tells the story of his crossing of the two World Trade Centre towers by wire: a brief, extraordinary story that makes fantastic cinema.

The story is told through interviews with Petit and the other collaborators, original footage and re-enactments of the break-in into the WTC.  Petit is an effusive narrator, telling the story of his youth with obvious pleasure, throwing in the kind of dialogue you don’t come across on a daily basis – ‘I was cast away on the desert island of my dreams’ is a low-key example.  His friends – one senses that they aren’t in contact anymore – reveal what it is like to be lit by the glow of his obsession: Annie, who was ‘harpooned’ by Petit as a shy teenager; Donald, who pulled out of the event the night before with gleeful relief; the tears of Jean François as he flounders trying to express what it was like watching Petit walking between the two towers.

At the heart of it is this joyful, mischievous act.  It’s impossible to express here the effect of watching Petit dancing at that height: one of those moments beyond words that captures in its gorgeousness all that we daydream about as we sit on a stalled train, or greet the same people good morning more out of habit than hope.  The question that Petit was asked by the newspapers after his arrest was Why?, and it’s a question he mercifully leaves unanswered.  Why should we sully a gratuitously beautiful event with limited understandings?  The gift he’s been given is useless in the wonderful, Wildean sense of the word.

There is little more that can be said about Man On Wire that won’t pour out as undiluted enthusiasm.  The simplicity of the story precludes over-analysis, which wouldn’t be appropriate in any case.  This is one for joy.

The Church facing the Covid-19 emergency

Nobody Else But You