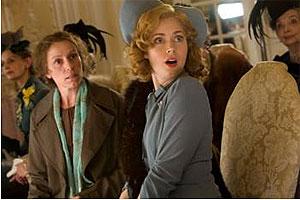 
Noël Coward’s spirit gets another workout, poor thing, in the entertaining Miss Pettigrew Lives for a Day. It’s a brief, well-made film that feels like watching a very good school play, full of ‘flexible’ accents and actors enjoying themselves with the 1930s’ clothes and decent one-liners.

Miss Pettigrew is a recently redundant governess searching for her last chance at employment. Played by the ever versatile Frances McDormand, Miss Pettigrew is one of those head-down women into whom people bump; she walks into the life of Delysia Lafosse, a woman who keeps her brassiere on the chandelier, her oysters with the crockery and her boyfriends apart. These men, all eager to bump into Delysia, come up against her new social secretary, a sartorially transformed Miss Pettigrew. Ensuing, a traditional comedic homage to the cult of true love brings together suitors, suitees and cigarette holders.

The script holds up to its pretensions. A fashion show displays the torture chambers of lingerie in 1939, with rust-free steel and “so much herring bone I’m looking for a tail” described as “walking air raid shelters”. The youngest of Delysia’s gentlemen is discovered in the “state of nature” by Miss Pettigrew. In an unusual twist, all three of the men are entertaining screen presences and Delysia’s conflict has enough reality about it to involve the viewer in the inevitable happy ending.

We’ve seen Miss Pettigrew’s type before. She’s a less confident Poppins and a less beautiful Doolittle, but she is still the straight talking plebeian, teaching those upper class types the ways of the world. Here she’s so hungry and gauche that she eats the beautifying cucumbers resting on her eyelids; next minute, she’s telling young fillies what’s what, with their “green drinks and partners and subterfuges”.

It’s odd that inequality has always been a comforting source of humour. Of course, back then poor people knew their place and we hadn’t invented that damned welfare state that made them all uppity bounders, what! Shakespeare was at it, with his manipulative service staff and wistful toffs who’ve had too much leisurely poetry, and Coward and his ilk milked the class conflict cow until it gave up and moved to Bollywood (seriously). Clearly there’s a big power dynamic going on: if you’re on top of the pile, you get to write the plays, and everyone feels better about everyone if the poor seem happy (with their silly crooked teeth smile) and the rich a bit silly; now everyone go back home, mine’s the mansion, see you in the gutter. Art like this has thankfully become one-off escapism rather than dominating the cultural mainstream as it once did: that way was the road towards hilarity such as Laugh at the Foreigner and Aren’t Gays Funny? And there’s enough of that floating around to still be wary.

But Miss Pettigrew is perfect for an unconfrontational Sunday afternoon, which was when I had the fortune to watch it. It was a pleasing distraction: life seen through a glass, rosily.