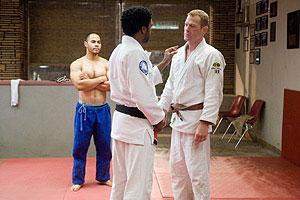 Director David Mamet has a reputation as one of the few serious writers in American cinema: Glengarry Glen Ross assured his place as a vital and original voice, and The Spanish Prisoner took narrative-twisting to a logical and astonishing end. He has always had trouble with female characters, and his pre-occupation with masculinity is old-fashioned and occasionally boorish. In Redbelt, he nicely merges these weaknesses with a plot that Stallone would reject as improbable and sentimental.

The performances are strong - Chiwetel Ejiofor as the heroic martial artist Mike, Ricky Jay as the pantomime bad promoter, and even Tim Allen’s movie star make the most of Mamet’s terse and suggestive dialogue. Yet towards the end, Mamet abandons the subtle characterisation and meditations on the warrior’s code, and has a big fight.

Of course, the battle is both symbolic and literal, and Mamet is no doubt bemoaning the commercialisation of the masculine instinct for battle. But with a poster that gives away the surprise ending- Mike prevails and all the important men admire him because he is the best at punching- and a clever script that degenerates into a Karate Kid for the Men’s Movement, Mamet seems seduced by the machismo.

The female characters are, inevitably, underwritten. The plot convolutions are never clarified. The actual scrapping is a bit dull, layered through video and television footage, and surrounded by ponderous observations and trite commentary. Rather like Adaptation, another film by a strong Hollywood writer (Charlie Kaufman), Redbelt follows generic convention to create a tidy ending. Unlike Kaufman, Mamet lacks the ironic skill to escape the inevitable sense of déjà vu.

Redbelt attempts to explore the space between the honourable code of martial arts and the modern, television-driven, corrupt and venal circuit of competitive fighting. Mike is the teacher, a Gulf War veteran, a symbolic good man who tries to help his students. When a disturbed lawyer wanders into his school and accidently nearly kills a police officer, Mike is dragged into a series of events that Mamet attempts to weave into conspiracy. He rescues Chet (Tim Allen) from a bar-fight – which was possibly staged – and is drawn into the dishonest world of the movies and marketing. Mike becomes a sort of pet for Chet, who tries to live vicariously through the veteran’s experience.

In spite of the engaging first hour, this is a weak effort. Behind the script are a series of assumptions that are never really challenged. Mamet is not just shading into misogyny, but into an entire perception of masculinity that romanticises a past that never existed. The ideas of mental fight, or intellectual warfare (let alone spiritual warfare, which is probably where the real battle of the samurai took place) are ignored, leaving this a slap-fest for undergraduates. Inevitably, the cinema had barely a dozen audience members.