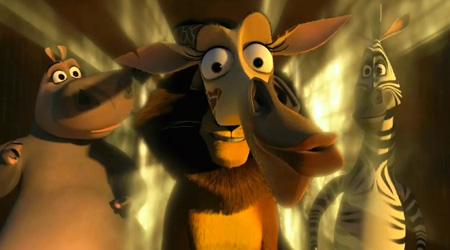 
In many ways, it is fortunate that nobody involved in the making of Madagascar: Escape 2 Africa was thinking too hard. Had Etan Cohen used his screenplay to grapple with thorny issues of race and nationhood, had Chris Rock exploited the comedy potential of being a zebra, or twin directors Eric Darnell and Tom McGrath considered following in the footsteps of intelligent and entertaining children’s movies like Monsters Inc, the general lack of imagination and coherence would doubtless have descended into a nightmare of inappropriate and contradictory messages. As it is, this remains a mildly entertaining film, at least for those who find the idea of talking animals and funny accents intrinsically amusing.

The best animation films have top quality visuals, a tight script, a clear moral message which drives the plot and a few asides for adults. Madagascar 2 has sporadic visual references to other films, a vague nod to the importance of love and friendship, a few good scenes involving monkeys and jokes that are frequently pitched above the children. Bob Fosse gags won’t reach the average preschooler, and dance fans aren’t that likely to dig comedy hippos. Still, it follows the expected structure to resolution, doesn’t have any nasty villains and makes a great deal of slapstick humour around a violent grandmother punching and getting punched.

Given the talent behind the animals- Chris Rock, Ben Stiller, Jada Pinkett Smith, Cedric the Entertainer and David Schwimmer- the material is weak. In lieu of characterisations, the animals argue and bounce around, rarely connecting as an ensemble but pursuing their own adventures until the rather forced conclusion. Stiller’s lion gets to do some father-son bonding – teaching his father the important lesson that there are different strokes for different folks. Smith and Schwimmer break the interspecies taboo to find real love, handily highlighting one of the problems of giving animals human personalities while Chris Rock does something about being unique, or not. Sacha Baron Cohen is about somewhere as a regal lemur, playing up the aristocratic insanity for the odd laugh. None of this adds up to much. Even a volcano and a river in spate aren’t that visually impressive.

There have been films aimed at children which have timeless messages and great wit: The Incredibles, Finding Nemo, The Wizard of Oz all manage to span the generation gap, delivering laughs and meaning. In fact, these films put more adult offerings to shame with their sharp scripts and positivity. Madagascar 2 feels like a cash-in, a brute display of animation technique with little soul.