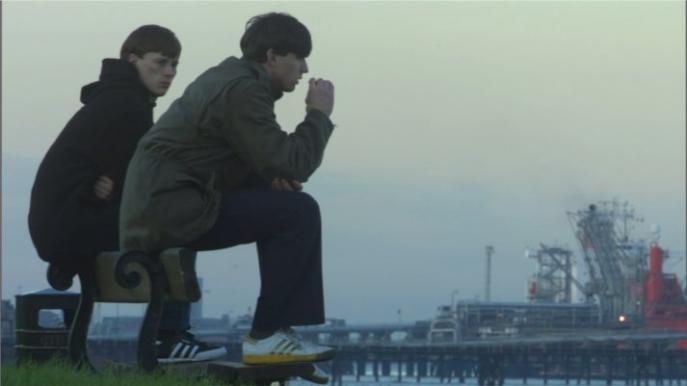 
Pat Holden’s adaptation of Kevin Sampson’s novel, Awaydays, finds itself emerging in a very difficult climate. I am not, as so many are when they use this sort of language, talking about our economic woes, but instead about the cinematic genre Awaydays has placed itself within. Before the film’s release, such holy names as Control and This Is England were being invoked in its honour and, unfortunately, Awaydays has simply failed to live up to the standards set by these, its most recent ancestors. In short, it lacks the complexity, authenticity and intrigue that both of these films possess.

The success and acclaim This Is England enjoyed must be, in part, responsible for this adaptation to film of a well-recognised and praised novel. Both film and novel explore the issues affecting young men in the north of England – feeling powerless, disenchanted and hopeless – and the activities, counter-cultures and rites of passage emerging from these problems. Of late, such treatments have become somewhat en vogue, and, as such, Awaydays feels somewhat contrived. The soundtrack’s relentless and unoriginal use of Joy Division does nothing to authenticate the film – if anything, it just makes Awaydays appear to be trying too hard to convince the viewer of its honesty and genuineness.

As do the countless scenes filled with shots of retro trainers: pairs of feet clad in ‘authentic’ footwear finding their way, in gang formation, to slow-motion brawls; the same feet stood on the banks of the Mersey, as we hear the brawlers in pensive mode speaking of how brawling is beneath them and how the leviathan chemical tankers leaving the harbour were lucky in their escape. Of course, there are real and valid issues here. But these are wholly lost amidst Awaydays’ attempts to convince you how genuine the issues are by placing inexplicable emphasis on the footwear that epitomises nothing at all. Most certainly, the substance implicit in the content is lost amongst the style.

The plot follows Carty (Nicky Bell), a middle class boy with the pathological characteristics of being both shockingly naïve and depressingly cynical (traits possibly resulting from the early loss of his mother) who, through his friendship with sensitive and overtly troubled warrior poet Elvis (Liam Boyle), pleads his way into the uncompromising world of gang hooliganism. Carty and Elvis’ relationship is the focal point of the film, as they initially find in each other comfort from their respective troubles. However, their friendship slowly deteriorates as Carty drifts deeper and deeper into the world of football hooliganism and it becomes apparent that Elvis is harbouring some unrequited homosexual feelings for Carty. Elvis is the most interesting character in the film, and Boyle’s performance is one of the only noteworthy ones. Elvis’ treatment of Carty wavers almost exclusively between the most moving loyalty and the most scathing disdain, which no doubt originates from Carty continually disappointing Elvis’ romantic tendencies. Elvis lives a polarised life, in which he embraces extremes. A noose hangs perpetually in his flat, serving as ‘a reminder of the absurdity of life and the certainty of death’. He talks of suicide (to a Joy Division soundtrack) and begins taking heroin in a troubled venture inwards. Elvis is always disappointed with what he perceives to be Carty’s lack of commitment to him, epitomised by his failed battle to get Carty to take heroin with him. ‘Come with me!’ he pleads, ‘Don’t you trust me?’ Elvis is entirely committed to Carty, and does what Carty asks time and time again, most notably when Carty goes to him after a long period of estrangement and asks for his help to beat up a man who had abused his sister; he is then heartbroken when Carty does not return his unquestioning devotion. This, ultimately, is what leads to the tragic culmination of the film’s last away day.

Awaydays is a film that does not do justice to the novel on which it is based. The dialogue is unconvincing and the acting (barring Boyle’s performance) is about as captivating as Gordon Brown’s latest youtube foray. It set its sights high, aiming to penetrate the arena in which works such as Kes, This Is England and Control (among others) reside, yet it falls significantly short. Conversations between characters feel repetitive and appearance is favoured over content throughout. Violence, depression, and the disenchantment of youth are the film’s subject matter, yet meaningful insights on any of these things are hard to come by.


Awaydays Trailer - In Cinemas May 22