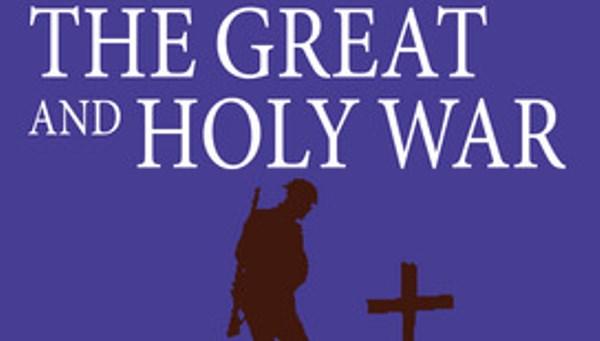 In The Great and Holy War, Philip Jenkins helps us to see a familiar topic from a different angle.  He explores the role of religion, public and personal, during the years of World War I.  What emerge from his study are new insights into the way religious consciousness changed during the twentieth century and how the pivotal period 1914–1918 connects intimately with contemporary realities.

We are used to the judgment that the war was both horrendous and pointless: millions either died or were maimed fighting in horrible conditions over a border which hardly moved for the best part of four years.  The judgment is surely reasonable.  But Jenkins reminds us that although those caught up in the war would have agreed with the first part of that assessment, the majority of British, French, Belgians, Germans, Russians and Turks, combatants and non-combatants alike, firmly believed for much of the war that it did matter – and could give reasons.

Another familiar premise is that the war was the concern of an elite few, under whom the exploited masses simply suffered, against their will.  Jenkins points to ample evidence that in fact a sense of common purpose united leaders, civilians and foot soldiers.  Yes, some of that purpose may have been delusional and the leadership mendacious – towards the end there were mutinies and popular uprisings, and afterwards people looked back in horror at what had happened.  The old order did collapse.  Nevertheless, during most of the war, for the majority of Europeans on each side, there was a common sense of commitment to a national cause.

A third judgment makes this war the first fully mechanised and modern war, the product of a universal secularisation of political relationships as religion slowly and inevitably lost its grip on a modern world.  Jenkins’ book, however, establishes the central role that religion played, publicly and personally, in framing purpose and motivation for war, and finding meaning in its suffering.  He contends that it can be described accurately as a ‘Holy War’ (pp. 7–9), in the tradition of the Christian crusade, from the way it was promoted and conceived of by those who participated in it – at every level.  Thus he undermines a fourth judgment: that Christianity has always (at least since the Thirty Years War) been a religion of peace.

The first part of the book (Introduction – Chapter 6) explores the war years themselves, largely from the European perspective, and the role of religion as motivator and consoler. The more extreme language shocks us now: ‘Kill Germans-do kill them; not for the sake of killing, but to save the world, to kill the good as well as the bad, to kill the young as well as the old… I look upon it as a war for purity, I look upon everyone who died in it as a martyr’ (p. 71 – British). Or, ‘World war, you transfigure our nature, like the Word and the Spirit… Come, Sword, you are to me the Revelation of the Spirit’ (p. 77 - German).  Compare also a prayer of praise to God, who reigns on high above ‘Cherubinen und Seraphinen und Zeppelinen’ (p. 12).

Jenkins’ range of references shows that Christian leaders who fused theology and a call to arms were found in all denominations on both sides.  Nor was it just about Christianity.  As the Ottoman Empire entered the war, the sultan-caliph declared: ‘there is no doubt that the Divine help and assistance of the just God and the moral support of our glorious Prophet will be on our side to encourage us’ (p. 8).    Meanwhile Muslim subjects of the Allies would fight with as much devotion on the other side.  Jenkins quotes a German Jewish voice: ‘the German people played a historical role as God’s people at a time of world crisis and divine judgment’ (p. 240); and British and French Jews were vigorously patriotic, though avoiding holy war rhetoric (p. 243).

The language and imagery of scripture allowed already-committed believers to integrate their personal religious sensibility with the national cause – and often drew those committed to the national cause back into the practice of religion. Britain experienced a ‘run on the bank of God’ (p. 71), Churches in the German-speaking world suddenly filled with secularists (p. 74), while a new entente between Church and State in republican France was ushered in by President Poincaré’s vow and commitment to a new ‘union sacrée’ (p. 89).  America and Russia experienced similar outbreaks of martial and religious fervour.

The wartime religiosity was pluriform. At the more theological end, there was biblical language of salvation, purification and martyrdom.   The Apocalypse became a central text, framing the war as a cosmic battle between good and evil and making generals into messiahs. The book’s lurid imagery offered a religious language for the carnage on the battlefield and the end of a world order.   As the horror and the human cost mounted, the narrative of Jesus’s sacrificial death ‘for his friends’ took on a central role, both for combatants and their loved ones.

But there was also the folk piety.   This ranged from the uncontrollable spread of stories of visions and miracles to the development of new apotropaic practices –  the hammering of nails into a giant wooden stature of von Hindenburg is a particularly striking example (p. 130).  Though more naturally at home in Catholic and Orthodox cultures, these were as prevalent amongst Protestant Christians.

Jenkins also looks at the rise of spiritualism on the home front and the growth of other occult beliefs and practices, particularly among the intelligentsia – signs of the religious fragmentation to come.  He explores how a post-Christian apocalyptic narrative came to underpin both Bolshevism and National Socialism, and charts the toxic rise of political anti-Semitism in the latter years of the war.

The second part of Jenkins’ book explores the aftermath of the war and the fate of institutional Christianity, from revolution and a near annihilation in Russia, to reformation, secularisation and new, radical movements in Western Europe and America.

He also reminds us that it was a world war and looks in detail at how the complex interweaving of religion and politics played out in the wider world.   Central is the special status of Allenby’s war in Palestine, often played in the churches and media of the time as a new crusade, a focus for the Holy War theme.  The Balfour Declaration nourished both Zionist and Evangelical dreams, and changed relationships with the Arab world irrevocably.

Looking further, he traces the stirrings of a new, global, Muslim consciousness, balanced by a political pan-Arabist movement, in response to global events. He notes the traumatic effect of the suppression of the Caliphate on the aspirations of the international Muslim world, and explores the war’s collateral effects on political and religious consciousness in Africa and India.  Alongside the independence movements, he notes the rise of Pentecostalism and the emergence of the independent African Churches, now a prominent reality on the religious scene.

In 1914 Europeans controlled the guns, the seas, the wealth – and the telling of history.  In the context of a devastating war they made punishing demands of their colonies, took ad hoc political decisions and forged ad hoc alliances.   As the balance of power, wealth and voice has shifted, those distant causes continue to have their unforeseen effects.

Jenkins’ fascinating and highly readable exploration of the religious dimension of the Great War can help us to better understand the world we see today.

Titus Oates and the Popish Plot