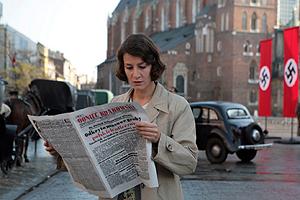 Among the soldiers of the Polish army who fought with such heroism In September 1939, was Andrzej Wadja’s father.  Captain Wadja did not face the Germans in the south and west, but the Russians in the east; consequently, he was one of the 22,000 officers of the Polish armed forces murdered in April 1940 in the massacre subsequently named Katyn, after the site in north-western Russia of the largest mass graves.

That date, 1940, is loaded with significance: for decades, official histories based on Soviet ‘post mortems’ dated the massacres in 1941, when Katyn was under German occupation. This conspiracy theory even now surfaces from time to time in Polish newspapers, despite overwhelming evidence to the contrary, and the acceptance in 1990 by the Gorbachev administration of Soviet responsibility for the crimes.

The search for the truth about the events at Katyn is one of the themes of the film.  With allegations and counter-allegations thrown by the Nazi and Soviet propaganda machines, with Poland ripped-up and abused in the middle, the officers’ wives and children have nothing to hold onto but uncertainty, finding the clarity they seek only in the final fifteen minutes of the film through a blood-stained diary recovered from an officer’s corpse – a diary that ends on 4th April, 1940.

This pursuit of a very personal truth becomes a metaphor for a national Polish search for identity: for identity as a state, for the trappings of statehood, for a national army under their own control, for uniforms that can be worn with self-respect, for borders that will not be pencilled out on the whim of larger neighbours, for reliable allies and a clear idea of who is the enemy.

There is an unexpected obscurity and elusiveness to the story, which results from a constantly moving narrative centre: as characters slip into the plot, linked by accident (a chance meeting, a business transaction loaded with other meanings), the camera leaves one story to follow another.  Possibly confusing if unprepared for it, this narrative style is also expressive of the accidents of warfare.

This shifting narrative core also communicates something of the experience of those caught up in this story, the desperate sense of confusion and loss that comes of not knowing the fate of your husband or father.  It also perhaps suggests another evasive centre: where is Wadja himself in this story?  One is left wondering if his emotions are invested in the orphaned daughter, or the resistance fighters, or the officer who survives to serve the Soviets who killed his comrades, or the defeated academics who have abandoned hope of a free Poland, or in all of them. He was there, he knew, he acted.

Unsurprisingly, in one attempt to cut through the mess, Katyn deploys Catholic imagery to articulate Poland’s martyrdom and passion.  In the opening moments of the film, a Christus figure ripped from a wayside shrine is draped in a military great-coat and bizarrely given extreme unction; elsewhere, a dead man is seemingly identified by his rosary, or an officer passes beads to a subordinate to steel him for the future; back in Krakow, a resistant returns from the Warsaw sewers and seeks out her parish priest before her family.  But, the most memorable images of all – horrifically memorable – are in the last ten minutes of the film.

Based on their thorough research, Wadja and his team painstakingly recreate the killings: from the cattle trucks, senior officers were loaded into prison vans; from these, one by one, they were stripped of their valuables and taken to a cellar where their fate became obvious to them.  Their names checked, they were handcuffed and led to a second cell where they were shot by a member of the Soviet secret police with one large-calibre automatic pistol round to the head.  Their bodies were dragged from the room in the minutes before the next man arrived.

At Katyn itself, standing on the edge of the pit, with the bodies of their comrades beneath them, Wadja has more soldiers recite the Our Father, line by line, until the bullet silences them.

The only certainty is death, death which cracks through the narrative confusion with horrific clarity in those final minutes.  This is what you will remember when you leave the cinema, this will be with you until the following day, this will be with you when you kiss your children good night: the brutal slaughter-house methods of dictatorship, and the heroic duty to resist.