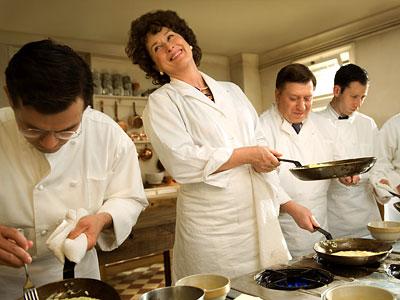 
The term ‘celebrity chef’ is one that has only recently made its way into common parlance.  In the last few years chefs such as Jamie Oliver and Nigella Lawson, have made their way into our kitchens and staked their territory.  Yet as is almost always the case there were others who paved the way for their success.  In this sense, the film Julie & Julia can be considered as an acknowledgment of the culinary history that underlies much of our contemporary interest in food as well as the art of fine cooking and dining.

Julie & Julia introduces us to two women who both turn to cooking simply because they love it.  Of course, there is the storied Julia Child, a native Californian who finds herself searching for something to do in mid-twentieth century France.  Not content to dedicate herself to hat making or card playing, Julia takes on the male dominated world of haute cuisine.  The rest is history.  Not only does the indomitable Julia succeed in mastering the art of French cooking, but she also succeeds in introducing such an art to the more prosaic North American palate.

One person who falls under Child’s influence is Julie Powell, a twenty-something New Yorker who in 2002 sets herself the double task of cooking five hundred plus recipes in Child’s first book, Mastering the Art of French Cooking, and documenting the experience in a blog.  Julia is Julie’s muse and with her inspiration she is able to escape the banality of her cubicle and create some terribly complicated yet certainly delicious meals.

As one of America’s most accomplished actresses, Meryl Streep assumes the role of Julia Child.  Interpreting such a singular and well-known personality is a tall order, but Ms. Streep is spot on.  Her performance avoids superfluous exaggeration and she seems to catch the humour and general cheerful nature of her character.  Perhaps this is what made Julia Child so appealing to so many people, in practicing her art she genuinely seemed to enjoy what she was doing.  Is that not what many of us aspire to?  It may only be a select few who have the possibility of doing what they love for a living, but when someone is able to do so, it is a joy to watch.  This is what Ms. Streep treats us to, a glance into the life of a woman who discovered what she loved to do and was able to do it with abandon and supreme delight.

The story of Julie Powell is quite another, but probably one that more easily resonates with the experience of most young people.  Played by Amy Adams, Julie Powell is stuck in a job that barely pays the bills and is far from inspiring.  Her character typifies the young, educated, urbanite who gets by while hanging onto the hope that one day she will be able to do what she really loves.  The reality of her situation is that it is the frank acknowledgement of her dissatisfaction that pushes her to actualise her hopes of becoming a writer.  In chronicling her quest to master the art of French cooking she becomes a (post) modern celebrity in her own right.  Adams is able to express the dual resiliency and fragility of her character.  While she does not shy from her task, the road toward its achievement is neither straight nor without hindrances.

It is often said that behind every successful man there was at least one good woman who untiringly supported him.  In Julie & Julia the opposite is true, for as both of the protagonists are women, the supporting roles are played by their husbands.  Stanley Tucci plays Paul Child while Chris Messina is Eric Powell.  While both men are devoted to their wives in themselves, they are also champions of their culinary zeal, and in some instances, obsession.  Of course, their efforts and patience are well rewarded with unending epicurean delicacies.  What man wouldn’t like to come home to a finely crafted French meal, even if it means putting up with his wife’s occasional cooking induced hysteria?

Should you choose to see this film, it is advisable to do so with the intent of enjoying a nice meal, or at least a tasty pastry, afterwards.  After two hours of Julie & Julia you will definitely be hungry.  Bon Appetit!

A Passion For All People?