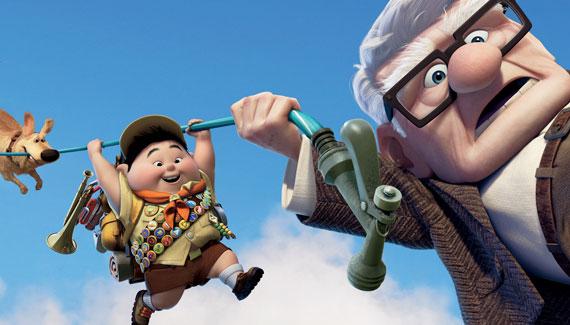 
When I agreed to see Up I hadn’t a clue what I was signing up for.  I was admittedly surprised when I arrived at the cinema to discover that it was an animated film.  The level of surprise quickly increased when I was told that it was 3D and was handed a pair of oversized glasses.  While I may have taken my six-year old niece to see such a film, it certainly wasn’t one that I would have chosen for myself.  Be that as it may, there were no alternative options available, so Up it was.  As I waited for the film to begin, with the gawky glasses in place, it dawned on me that everyone in the cinema was a bona fide adult.  There wasn’t a six-year old in sight, and as it turns out this was entirely appropriate.  While Up deals with themes that are certainly not off limits for children, such as death, grief, hope and conversion, their significance is more likely to be properly grasped by those who have more than a handful of years of life experience.

Up is essentially about a journey, and by extension, an adventure.  For Carl Fredricksen, the journey commences towards the end of a life well-lived.  In contrast, for the young and eager Russell, the journey begins at the premature age of eight.  Due to differing circumstances, both characters find themselves in Fredricksen’s house, which is being carried away by hundreds of balloons emerging from the chimney.  The destination is South America, though the precise location remains a mystery.  It is in South America that Fredricksen wishes to spend his remaining years with the memory of his beloved and deceased wife.  The promise that this great southern continent presents to Russell is of quite a different sort.  What is crucial for Russell is to obtain a scout’s badge for ‘assisting the elderly.’

After a few missteps, the two oddly matched adventurers make landfall and begin to trek over field and valley while pulling the floating house behind them.  Along the way they meet a host of animated characters, including several talking dogs, an enormous female bird dubbed ‘Kevin’, and a self-interested and villainous explorer known as Charles Muntz.

What surprised me most about Up, aside from the initial shock of the very real 3D animation, was the humour that it was laced with.  The writer and directors do a commendable job of tempering suspense and near disaster with genuinely funny dialogue.  For one, there is the situation itself.  Any time, be it in real life or in animated film, that two people of different generations are put together, there is bound to be conflict.  While Fredricksen wants to get things done as simply and quickly as possible, Russell is forever distracted.  For the old man these distractions are nuisances, but for Russell they are exciting adventures and opportunities to assist the elderly, i.e., Fredricksen.

While Up is indeed about the act of journeying, as with most journeys this one is not confined to distance.  There is also an interior journey on the part of Fredricksen that could be identified as conversion.  Following the death of his wife, Fredricksen becomes an isolated and lonely man.  His acquaintance and subsequent friendship with Russell leads him from a fixating attention on himself and his immediate goal, to a wider concern that includes the aspirations of others.  This ought not be too surprising for it is usually children who are able to lead adults to the treasured virtue of selflessness, and from there they/we are most often rewarded with joy.  Russell is ironically, though very truly, a source of both frustration and joy.  In this way he’s quite like most children.

Up was such a pleasant surprise that I am likely to give future animated films a fairer chance.  Whether or not they deliver remains to be seen, but if they are at least minimally comparable with Up then I should think that they certainly have something worthwhile to offer.

The best thing is to walk