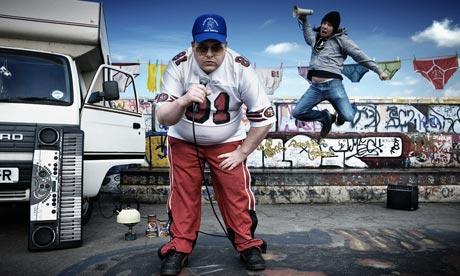 
With the credit crunch hanging over human existence like a soul-devouring dementour at Hogwarts, it’s refreshing to know it hasn’t stopped directors such as Shane Meadows creating consistently brilliant films on a small budget. ‘A proper credit crunch film’, I heard Meadows announce recently in an interview regarding his comic offering. A 75 minute effort that cost no more than ‘48 grand’ to make (apparently that even included the drinks for the launch party), it was shot in five days as part of Warp Films’ ‘five day feature’; a programme that encourages directors to shoot a film in five days as the title suggests.

Whilst a challenge, these pressures seem to suit the fiercely independent Meadows. He uses this anti- Hollywood template to create a truly funny whilst deeply moving film. It’s almost a cliché to say it but Meadows finds the universal in the local and Le Donk and Scor-zay-zee is no different. The cryptically titled film gives the mockumentary genre a little post-modern twist in that Meadows plays himself, an observant yet dedicated director who follows around Nicholas ‘Le Donk’ (Paddy Considine) a failed rock star-come-roadie who now manages (if manages is really the word) Scor-zay-zee (Dean Palinczuk) a dim but talented bedroom rapper from Nottingham to whom Le Donk refers as ‘a big lump with head.’ Considine’s character, like all failed rock stars is a bit pathetic, a bit belligerent and a tad bitter; he has lost everything, including his wife (who is now pregnant with his child). we watch as Meadows films Nottingham Svengali Le Donk and rapper extraordinaire Scor-zay-zee, who together drive up to Old Trafford stadium for a gig starring the uber-famous ‘Arctic Monkeys.’ Le-Donk, officially a roadie, reveals to the camera his ridiculous scheme to get Scor-zay-zee his biggest ever show in front of 50,000 people supporting the aforementioned pop stars.

It is Meadows’s juxtaposition of the unsuccessful but persistent small town mentality with the stature and hyper-organization of a concert at Old Trafford stadium that supplies the film with its main source of humour. The characters are pathetic but endearingly so. Scor-zay-zee, having blagged his way onto the empty Old Trafford stage, tries to find a socket to plug in his cheap keyboard during the sound check in order to perform his music. He cuts to the camera and asks another of the sound engineers in a droning and confused Nottingham accent ‘ …so you know how to work keyboards then?’ Herein lies Meadows’s talent, one that so many filmmakers lack- he makes us really feel for the characters and brings out their humanity through something as simple as a plug socket. Scor-zay-zee is blissfully unaware of the ludicrousness of his situation; there is nothing more pressing it seems in his psyche than this dear plug. Scor-zay-zee is unabashed in his sincerity and earnest in his belief that he will get to perform on the day. It is hard not to want him to succeed. Especially because the reason he raps is to make his ‘mum and dad proud’.

Similarly, Considine manages to do something only the very greatest comic actors can do: he is funny, repulsive, tragic and flawed but still we want him to succeed despite all his negative traits (of which there are many). For example, he is so sure technology will allow him to be a father over the Internet and thus compares his baby to a ‘cyber pet.’ But despite this I still wanted Le Donk to succeed or to at least experience a revelation of some sort; anything to erase the misery of his past. Despite his insecurities and comic obnoxiousness, he is searching for meaning in his life, albeit with a fat rapper from Nottingham for company. But by the end when he is forced to make a choice between performing at Old Trafford and visiting his newly born baby one cannot help but feel his journey to Manchester, in spite of all its flaws and mind boggling absurdities, has been something of a pilgrimage. Considine manages to do something only certain actors can do: he can make you laugh, before making you cry, before then making you laugh again.

For many, the name of Shane Meadows, one of the most critically lauded directors of the past ten years or so, is synonymous with the adjectives dark, gritty and realistic. Whilst I suppose these buzz words lend themselves to Dead Mans Shoes and A Room For Romeo Brass, it would be unfair to overlook Meadows’s evident thirst for producing side-splittingly funny film moments. In Le Donk and Scor-zay-zee, Meadows really comes to the fore as a comic director (and actor). What’s more, I think it has as much ‘realism’ as This is England, and his attention to detail of life in Britain remains spot on. Considine’s performance is perhaps the film’s show stealer. His desire to succeed and his repulsive personality call to mind the tragicomic awkwardness of The Office-era Ricky Gervais, and so I think it fair to say that between them, Meadows and Considine have done it again and have come up with one of the comic films of the year.

The Tree of Life