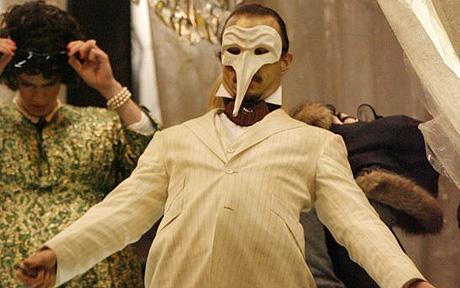 A quick pub quiz before we get to the body of the review proper (and trust me, there’s a theme here).  Name the librettists of the following famous operas:  The Magic Flute[1], Rigoletto[2], St Matthew Passion[3], The Ring[4].  Tricky?  Well, the answers are at the bottom of the page.  I suspect, though, that the names of the composers­ – Mozart, Verdi, Bach, Wagner – come much more easily.  But in most cases, whilst the music is rightly the main point, if the words don’t work and don’t give the music something to hang on, the whole opera becomes less satisfying and is robbed of a layer of richness.  John Adams (musically excellent, now writing his own libretti) has recently been criticised for lacking a certain direction in his recent operas, and Sir Michael Tippet (who also wrote his own words) once famously set to music the word ‘ovipositor’.  I suppose it has an agreeable rhythm.

Film, like opera, is a collision of a number of different ways of communicating, and at least three languages mix together in film:  the visual, the verbal and the musical.  The problem with The Imaginarium of Dr Parnassus is that although the arias are fantastic, there are definitely some issues with the libretto.

The recitatives in this case are certainly tiresome.  Thinking ‘come, on, where’s the next tune’, I recall feeling my buttocks numbing ever so slightly at several moments during the film.  Aside from the delightful moments of fantasy, a lot of time seems to have been spent by half-a-dozen mainly American actors sitting on piles of rubble in and around Battersea Power Station, moping.  I’m not sure if these lumberingly awkward passages are actually improvised, but there is a definite whiff of GCSE drama about them.  At least two of the men (and forgive me for being vague, but it does get a bit confusing who’s who at certain points) resort to the repeated hammering of the word ‘mate’ to punctuate every utterance – in an attempt to nail their accents to one spot, perhaps – as if this alone will convince us that they are, really, working-class Londoners.

Mind you, the arias are great. By which I mean the set pieces of animated fantasy which are strung together to make the film – all are exactly what you expect from Gilliam’s visual imagination (now rendered through computer-generated animation, not cut-out, hand-drawn and stop-frame as it was in the good old days of Monty Python’s Flying Circus).  The central idea of the film is that Dr Parnassus is a fallen monk from an ancient religion, victim of an addiction to Faustian pacts, possessed in a moment of grace that balances his own submission to Satan, of an enchanted mirror.  With the mirror comes the power to let others’ imaginations become real on the other side of the glass.  As characters break through the magic mirror of Parnassus’ sideshow, what they once felt vaguely and inarticulately becomes visualised and physicalised, in a through-the-looking-glass world.  The experience of seeing these parts of a forgotten or sat-upon imagination has a miraculous effect on everyone who experiences it.  Through the mirror, complacent upper middle-class women experience the ecstasy of their imaginations, and return to the physical world renewed; the lonely and isolated young man sees his beloved in a whole new light; a drunken assailant of the vulnerable Valentina (Lily Cole) meets a swift end; and darkness and evil are usually defeated, because visitors to their own imaginations seem in the main to choose the right path, not the way of the Devil (played with aplomb by the rock/blues legend Tom Waits, in what might become an iconic performance).

However, there is a contradiction at the heart of this film.  Parnassus, you will recall, used to belong to an ancient and mysterious religion.  That old religion was founded on faith in the story – the idea that stories, narrative, tales, the very act of reciting stories is what keeps the world in motion.  Terry Gilliam has produced an intriguing, thoughtful reflection on a number of ideas (and a film with moments of beauty), but it is a film in which there is a glaring absence – a single, interesting and compelling narrative.