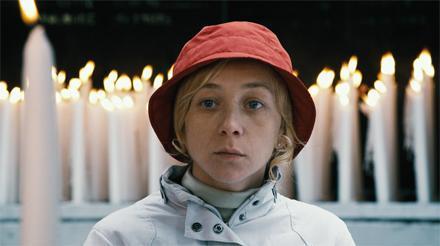 
The problem in cinema, as in literature, is how to portray grace. Flannery O’Connor does it through the bizarre and the grotesque; one can see this tradition in films like Raining Stones or Magnolia. Other artists prefer the almost unseen – grace is so hidden in the ordinary of our lives that it makes its appearance in the almost imperceptible moment whose cause is mysteriously unknown. Bernanos comes close to this in The Diary of a Country Priest or Gabriel Axel slightly more obviously in Babette’s Feast, to take two well-known examples. In her previous film, Hotel, Jessica Hausner wanted to explore not grace but fear and through that the reality of loneliness. Through these experiences she wanted to raise the big questions of existence, the where and the whence questions that haunt us but we suppress. Both the problem of grace and these questions are present in Lourdes, Hausner’s most recent film, shown during the London Film Festival. I am not sure that she is entirely successful. Lourdes can be easily be portrayed as a sort of religious Disneyland or as a vast economic operation rather than a religious one. In a subtle but understated use of images Hausner allows these possibilities to present themselves but they are not the main point. From the beginning we are introduced to the ordinary – a group of pilgrims under the supervision of the Order of Malta. They represent all the mixed motives of any human gathering in such a shrine – some have come for a physical or psychological healing, others for the change and maybe the thrill of witnessing a miracle, others are not quite sure why they have come. Likewise for the helpers, with their mixture of ordinary worldly life, faith and piety. Put the whole lot together and you have one of the spiritual, human and cultural crossroads of contemporary culture.

The main character, Christine (Sylvie Testud) is exquisitely played in a quite semi-articulate way. She is profoundly paralysed – indeed one of the quiet motifs of the film is the degree of paralysis in us all. She would prefer to go on the pilgrimage to Rome – much more culture – but as pilgrimages are her only ways of getting anywhere she takes what she can get. There is no sense of great faith here, but there is a rather lovely and determined person. There are, of course, others who have faith and are just as severely afflicted but the miracle is granted to Christine. That is part of the exploration that lies at the heart of the film – Cecile, the chief nurse, has faith but does not believe in miracles. That she is dying from cancer only emerges when she collapses. There is no obvious reason why Christine should be the one who receives the grace of a miracle and recovers her ability to walk and move again. She does not exhibit any deep spiritual transformation or even much gratitude. In fact, like all the characters in the film there is awkwardness and inarticulacy about such events. Even her joy seems restrained and with astonishing sangfroid she proceeds to the ordinary, especially the possibility of having a life and a relationship with the handsome and somewhat tentative carer, Kuno (Bruno Todeschini). What is fascinating and often humorous is the way in which the other pilgrims in the group become a Greek Chorus commenting on Christine. Their responses act as a probing commentary on the whole event and serve to dissect the cynicism, resentment, absence of faith and self-centredness under the surface of  seemingly selfless acts. This understated film reaches its dramatic climax when at the final celebration, Christine, dancing with Kuno, misses a step and collapses to the floor. Has the miracle been false? She gets up and walks again but something of her dream (and ours) has fallen too. She returns to the security of her wheelchair.  One of the ‘Greek chorus’ asks if God can be in charge when miracles seem both tentative and capricious; another replies, if God is not in charge then who is? And so Lourdes opens into the shadow of a discreet nihilism which has been there from the beginning.  The question, of course, is always a valid one but what is missing in this rather coarse exploration of humanity and faith – notwithstanding the accomplished acting of the cast – is a sense of the largeness of the human heart, even in its questioning. Whatever one thinks about Lourdes, it is a place of faith and generosity. Humanity, in all its interior and exterior sickness can come. Not all miracles are dramatic and visible; some simply heal and enlarge the soul, and with it humanity. Somehow, this is a rather cold and mean film on a scale too small to tackle the theme it sets itself.