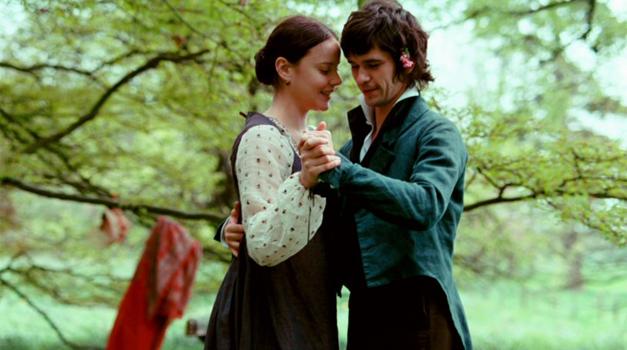 
It was always going to be a challenge, taking on a love story that took place between a bed-bound poet and the girl next door, when the real drama lies not in the physical events but in the mind of the poet. With so little really happening – Keats meets Fanny, they fall in love, he leaves for Rome and dies – Bright Star can only succeed as a lyric, in much the same way as one of Keats’s Odes works. Here the energy of the story is replaced by a more stationary meditation. Rather than the narrative pulse of mystery, tension and climax, our attention is focussed more tightly on an object, a feeling.  Bright Star isn’t quite beautiful enough to sustain interest in this way. The seasons do most of the romancing: enmeshed flowers, trees unpeeled in autumn, rain skulking outside the window whilst a fire dries the family, but even this isn’t enough. Writer and director Jane Campion works the sparse material hard, turning Keats’s friend Charles Brown into a near-monster to provide an element of crisis and Fanny into an equally lovesick partner (she fills her room with butterflies only to let them all die when Keats’s next letter is too curt for her heart to cope with), but at nearly two hours long there are only so many love scenes our hearts can handle.

In truth this is because so little did happen. The survival of the letters of the dead is usually met with distasteful exuberance by critics who make themselves at home in lives at far remove from their own. It’s particularly intoxicating to feel ownership of someone who has created something that has touched us. Despite this caveat, however, a review of Bright Star would be lessened by not mentioning that the Keats of his letters doesn’t quite match the generous lover of the film. Bright Star’s Keats is captured by Fanny and falls happily and healthily in love. The letters, however, portray his possessiveness more persistently – ‘How have you pass'd this month? Who have you smil'd with? … You do not feel as I do – you do not know what it is to love – one day you may – your time is not come. Ask yourself how many unhappy hours Keats has caused you in Loneliness. For myself I have been a Martyr the whole time…’ (May 1820). Elsewhere he demands she doesn’t go into town alone and promises to check up on her, the direct opposite to his behaviour in the film. The love that emerges from his letters to Fanny is eloquent and worshipful, but it is more a love concerned with his own experience of it rather than Fanny as a person. This isn’t dredged up to condemn Keats – I write as someone who used to keep a mental list of the Ten Most Romantic Things I Have Done, to add to which I would happily engineer situations and people, unaware that they had taken the trouble to actually have feelings too – but it is to highlight for the sake of accuracy that Keats was more of a ‘normal’ human being than the film would have him so.

Of course Keats was not the first or last twenty-five year old (or older) to be accused of being more in love with Love than with the object of his attraction. Keats in 1819, aware of the downslope towards mortality on which he was speeding, was probably in exactly the right receptive frame of mind to fall desperately in love with someone. The limitations of film illuminate the point: filmic love shows us the happy playful times and the difficult sad times, but not the actual ground of loving partnership in which both these flowers grow. Love on film is almost always about the emotions created by a relationship than the relationship itself. And nowhere are these emotions sharper than at the moment just before the kiss, before the consummation, and when these emotions feel death’s closing door thinning the light… It can be an excellent stimulus for poetry, but to hold up as philosophy the importance of emotion over the importance of the person would surely be a fallacy. Keats was an excellent poet and conjecture leads him on an if-he-had-lived trajectory to greatness, but he was no philosopher, nor wise man. ‘Beauty is truth, truth beauty’ sounds incontrovertible, an aphorism of such immense vague insight that all is swept away before it, leaving only a small-voiced pedant asking, ‘Yes, but what are you going on about?’

The attraction of figures like the Keats of Bright Star lies in how our imaginations respond. Seeing someone live their life, in Leonard Cohen’s words, ‘as if it were real’, cannot fail to make us ask how we have treated our own uniqueness: have we let it become debased, devalued? Have we let other forces live our lives for us? How have we stewarded the blend of talents and traits that we have been gifted? Great art articulates these questions: the poet Rilke standing in front of a torso of Apollo and concluding – ‘Now change your life’.

Too Brave To Dream: Encounters with Modern Art