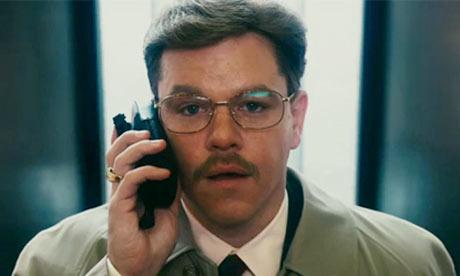 
Take one price-fixing Fortune 500 company, add a whistleblower, stir in a dollop of embezzlement, a pinch of bipolar disorder and you’ve got a recipe for a serious corporate thriller.  But, in The Informant, director Steven Soderbergh viewed these elements as raw material for an absurdist twist on movies like The Insider.

The facts are these. Mark Whitacre blew the whistle on price fixing in his company.  He worked with the FBI to collect criminal evidence. The company ultimately paid more than $100 million in fines and hundreds of millions of dollars more to plaintiffs and customers.

Plagued with bipolar disorder, Whitacre handled the stress badly, becoming manic and suicidal, trusting no one.  He embezzled millions, and received a ten-year prison sentence – three times more than those on whom he blew the whistle.  In 2008 the FBI publicly announced its support for Whitacre and asked for a presidential pardon.

Hollywood loves a good whistleblower story because they include secrets, high stakes and intrigue, elements that work well at the box office – Michael Clayton and The Insider are two examples.

Unlike the FBI agents who worked with him, not everyone would agree that Mark Whitacre is a national hero; some might say he is but one more black mark on corporate America’s report card. We can look at the facts but the reality is that we can only know the Mark Whitacre whom we see in the movie.

Matt Damon’s performance is nothing short of amazing.  You’d never believe this is the same man who plays Jason Bourne.  You can’t take your eyes off him. He disappears perfectly into the many guises that are Mark Whitacre.  ‘Just a little more out there than the rest of us’, is how one character describes him – and that’s putting it mildly. We cringe at what he does but he is so charismatic that we find ourselves forgiving him when he says ‘That’s it, I’ve told you everything’, even though we know he hasn’t told us everything. It is Damon’s performance that makes this story so believable.

Award-winning composer Marvin Hamlisch uses music very purposefully to set the black comedy tone of the film and put the audience in a comedic frame of mind for this incredible story. He does this by using a variety of genres: polka, bluegrass, big band, jazz, chart toppers, even what sound like themes from secret agent movies and TV game shows. This works surprisingly well.  The music is not a distraction and we come to understand that it is important to the tone and mood of each scene. For example, the hoedown bluegrass music during Whitacre’s lie detector test shows the audience how absurd it is to carry out a truth test on a compulsive liar.

The music adds significantly to what is the lynchpin and most inspired stroke of the entire movie: Mark’s voiceover narration. The almost constant flow of Mark’s interior thoughts crucially signals the man’s active fantasy life, as well as his intelligence, imagination, humour and oddness – all of which Matt Damon captures perfectly. This private commentary is a wonderful conceit that still only partially reveals the protagonist, but suggests that part of him is out of touch not only with reality but with himself. Whitacre can’t seem to distinguish between imagination and fact, and so his story becomes very curious, even absurd.

This absurdity is reflected in the narration, which is almost totally unreliable and doesn’t necessarily refer to the scene unfolding on the screen.  It’s more like a stream of consciousness.  Whitacre might be in the middle of a crucial conversation when something triggers this inner monologue that can spin off in any direction: neckties, polar bears, frequent flier miles – whatever. In the midst of one intense scene we hear his internal voice saying: ‘Polar bears hide their noses during hunting because seals can recognise them if they see their black noses on their white faces.’

Towards the end of the film, Agent Sheppard asks Whitacre: ‘Why do you keep lying?’  He responds: ‘I think I need to go back to the hospital.’  But his inner response, which only we hear, is ‘I don’t know.’

In the end, we have a portrait of a man who blew the whistle on a Fortune 500 company, worked with the FBI to make this happen, implicated himself as a corporate swindler and spent nearly eight and a half years in prison for multiple counts of fraud.  It’s perhaps understandable why this story was made into a movie at this time in our political and financial climate.  And maybe, just maybe, the best way to look at these serious but uncomfortable issues is through the black comedy that is The Informant.

Fraternity in faith: a vision of a future peace

Advent Week 1
Liturgy and longing
Advent: Good News for the Poor?
Dorothy Day and the body of Christ
The Jesuit way toward holiness