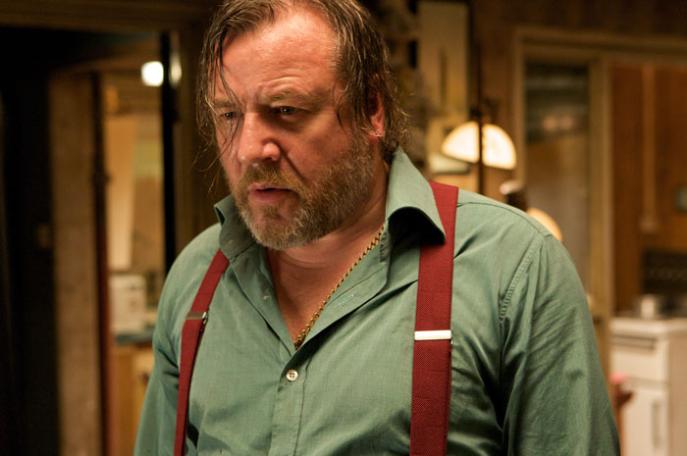 
Don't look so worried! This really isn’t just another Mockney gangster film full of wisecracking psychopaths high on crack and thwack and trading off the success (if that’s quite the right word) of Lock, stock… and Layer Cake. Granted, I too had my concerns when I saw the cast leering menacingly out of the dirty grey film poster. But put such things from your mind and see this film as if Vinnie Jones had only ever been Wimbledon’s least creative midfielder.

Equally, I would not want my own attitude to be unfairly prejudiced by the sales girl who took one look at me and, without further enquiry, sold me a senior citizen’s ticket. An experienced reviewer rises above such things with calm maturity, scientific objectivity and spiritual equanimity. Which, funnily enough are exactly the qualities that Colin Diamond (Ray Winstone) lacks when he wakes up in the shattered wreckage of his suburban upper middle class house to the reality of the shattered wreckage of his life and the mother-in-law of all mid-life crises. He has lived the dream of the East End hard man, fought the good fight outside countless pubs, fenced countless dodgy deals, done bad stuff only to his own sort, reaped the rewards and retired to be the owner of a second-hand car dealership. But, now his wife of 21 years has run off with a French waiter (Melvil Poupaud – known to us only as ‘Loverboy’) and nothing in his entire life has meaning any more. Everything he has held dear is fragmented like the tiny pieces of glass among which he lies and which used to be a glass window. His faithful love has been betrayed; the rock on which he has built his life has crumbled. He is a good man wronged.

Not unreasonably, the first thing he does is to call his mates. But he is a man of unusual mates. One by one, they arrive – an elderly bunch of retired gangsters who are enjoying the ill-gotten gains of their careers in their various ways. Really, they should be confining their banditry to cheating on the golf course. But they reassemble, like the Old Guard rallying to the return of Napoleon from Elba, out of loyalty to the leader who has never failed them – the huge hard man who led them through the gangland wars of ancient years to their present peaceful prosperity.

Despite their lack of recent experience, it is a short day’s work for the gang to kidnap the relevant waiter, bundle him into a hijacked van, take him to a Dockland safe house, beat him up, and dump him battered, bruised and bleeding into a wardrobe to await the coup de grace that will be administered by Mr Diamond himself. And then the moral question emerges of what is the right thing to do next. For Colin’s colleagues, the simple answer is to kill the miscreant. Surely no real man could do less than destroy his cuckold. But Colin then begins to have his doubts. Instead he takes refuge in brandy, panic attacks and seventies pop. The combination of grief and brandy (in adequate doses) can do funny things to a man. And if a diamond should lose its hardness, what can make it hard again? It is good for nothing and is thrown out to be trampled underfoot. This is not what the old guard expect of their Napoleon.

Alarmed at his cowardice, Colin’s friends – like a Bethnal Green set of Job’s comforters – attempt their own distinctively East End versions of supportive psychotherapy in a sequence of soliloquies, each based on a different philosophy.

Old Man Peanut (John Hurt) stands for the high traditions of feral East End gangsterdom. He slaps Colin’s face and screams in his ear the simple creed of the tribe: ‘The strong inherit the earth! It’s kill or be killed!’ Loverboy must die because he has challenged and humiliated the leader of the pack. If he lives, the leader has lost his authority.

Archie (Tom Wilkinson) offers a more modern presentation of the same thing – a contemporary conventional morality. Within the tribe, disrespect is a crime that requires the death of the perpetrator, not so much as a simple act of revenge, but in order to ensure that the cement of society is not loosened. Young people need to be given reasons to respect their elders.

Meredith (Ian McShane) stands for a strictly amoral hedonism: things have value only insofar as they give us pleasure. Colin should do simply what he feels like, with the understanding that he should feel murderous at such a humiliation and act accordingly. If Meredith were in Colin’s place, Loverboy would be dead already. But Meredith, like all good liberals, speaks only for himself. Colin should consult his pleasures and act in accordance with them.

And so, having heard his advisors, Colin steels himself to the point of decision. Flashbacks and dream sequences become more jaggedly fragmented as his thoughts become more drunkenly distorted. And gradually they also begin to reassemble themselves into a somewhat different version of the story of Colin’s life – a story that gradually includes intrusive memories of his wife, battered and bleeding crawling away from the brutal beatings he gave her. The story still contains all the events but interprets them in a sequence which suggests that in truth, Colin has always loved only himself.

There will be those who feel that the low budget single-set (almost all of the action takes place in a single room) makes it too claustrophobic and some have described it as the attempt to film a play: ‘Guy Ritchie directing Harold Pinter’. But I found it to be a taut and uncompromising depiction of what it is to be – and to cease to be – a man of the world. And the whole ensemble is held together by a huge performance by Ray Winstone in the central character.

I will not spoil the ending by revealing whether or not Loverboy makes it through the night. But Ray Winstone walks out into the dank night air of London’s Docklands feeling at rights with himself and with God, if still at odds with the world.

Pope Francis and the American dream