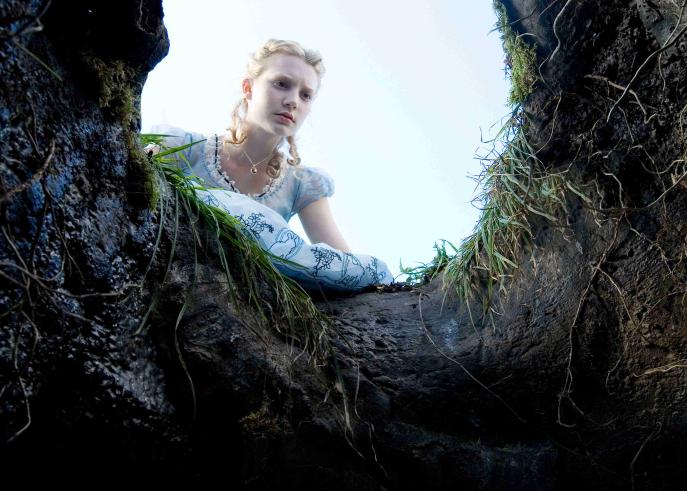 
For all the hype of the 3D presentation, the reception of Tim Burton’s Alice in Wonderland suggests a sense of predictability. We pretty much knew what to expect, given Burton’s trademark gothic imagining, distinctively rendered here by Johnny Depp as the Mad Hatter, a character on the brink of total mental collapse.

To my mind this is all to the good. It seems almost obligatory for contemporary films

aimed at both children and adults to err on the side of edginess and relevance – sometimes very disturbingly. Depp’s portrayal of Willie Wonka as a Michael Jackson look-alike in Charlie and the Chocolate Factory hints very clearly at the sad discomfort which now permeates even the most joyful of adult dealings with minors. In this respect at least, a whole supermarket of canned worms is avoided by focusing on Alice not as the little girl of the original Adventures, but as a stroppy and unconfident nineteen-year-old, seeking to escape the confines of a stuffy Victorian upbringing. And while I accept that Batman has come a long way from the comic-book punch-ups of my childhood, I am still reeling at the violence and ambiguous morality of The Dark Knight, which was allowed through on a 12A certificate.

I’m no expert, but if I had kids in tow when I go the cinema I would want someone to keep the edginess under control, and I would say Alice in Wonderland gets it right. It is certainly there, in the subtle re-christening of Wonderland as ‘underland’, and in the unstable Hatter, whose intermittent raspings in a Scottish accent signal imminent disintegration (before he is summoned back when Alice firmly utters his name like a stage hypnotist). Alice herself grows in the realisation that this may not after all be a dream, since the expedient of pinching herself doesn’t release her from it; yet she doesn’t seem too perturbed by this, and for all that she anticipates with dread the encounter with the Jabberwocky, there is of course never any doubt about the outcome.

We are even relieved of the subtleties of the Harry Potter adventures, where the young wizard has to confront the realisation that people are not what they seem, that smiles can mask villainous intent. Here the lines are clearly drawn: Anne Hathaway is a dreamy (if truth be told, annoyingly drippy) White Queen; Helena Bonham-Carter plays the evil and grotesque Red Queen vividly and enjoyably, but is too reminiscent of Miranda Richardson’s portrayal of a petulant Queen Elizabeth in Blackadder to be a source of dramatic tension.

Such tension, therefore, has to come from Alice herself, and the story of her empowering journey into adulthood. Mia Wasikowska is engaging and attractive, bemused yet sympathetic towards the strange creatures who present themselves before her. Her changes of body size, necessitating the consumption of potion and cake, here become a poignant analogy of her adolescent awkwardness and vulnerability.

She is confronted with the accusation that she has regressed in courage since her last, childhood visit to the underland. She has ‘lost her muchness’, to the extent that the populace debate whether it is really her.

Alice’s metamorphosis (imaged by the Blue Caterpillar who disappears into a chrysalis in order to re-emerge as a beautiful butterfly) is a lesson in Girl Power, as she learns the inevitability of her destiny as a champion for the White Queen, and strides forth in true Joan of Arc style to slay the Jabberwocky. Having identified her as a character of sexual interest (her initial disappearance down the rabbit hole and into the underland is occasioned by her fleeing an arranged engagement party), the story thankfully chooses not to follow this up, apart from a brief scene where she arouses the interest of the Red Queen’s paramour, and the jealousy of the Queen herself.

In fact Alice’s current ambitions leave no space at all for romance. On her return to reality, she turns down the ludicrous marriage proposal, and indicates instead her intention to follow her father’s footsteps into the colonial trading company which he had founded. She is taken on as an agent by her uncle, and the film ends with her taking leave of her family as she boards a sailing ship for the Far East. It is a triumphant but curiously cold moment: we are left with the impression that the adult world will be a lonely one for Alice, with nothing to compensate her for the true companionship she left behind in the underworld. She has indeed found her ‘muchness’, but at great cost: this is not Dorothy returning to Kansas from Oz, convinced that ‘there’s no place like home’.

There are the usual cavils to be made about the unsubtle parading of Disney values: the equation of beauty with moral goodness, and the converse (the courtiers at the court of the Red Queen all wear false noses and ears to win the favour of the deformed Queen). It is effortlessly superficial, but at least we are spared ‘back stories’ of how the sister Queens fell out, or the Hatter lost his sanity, and so forth. The dream logic, which spares us the explanations, is left intact. Any multi-dimensionality is left therefore to the special effects. I remain resistant to much of the hype (I am still chortling at the comment by The Guardian’s Martin Kelner, that he had been watching sport in 3D since 1962), but on the whole I would say these were impressive without being overdone. One can only take so many teacups flying past one’s ears, and the battle scenes just manage to fall short of Lord of the Rings-type self-indulgence.

Overall, this film is painting by numbers, which can explain the coolness of some of the critical reception. I’m not sure it is fair to expect anything more adventurous, however: this is a balanced and interesting rendition of a much-loved classic, which would leave the majority of filmgoers delighted and satisfied.