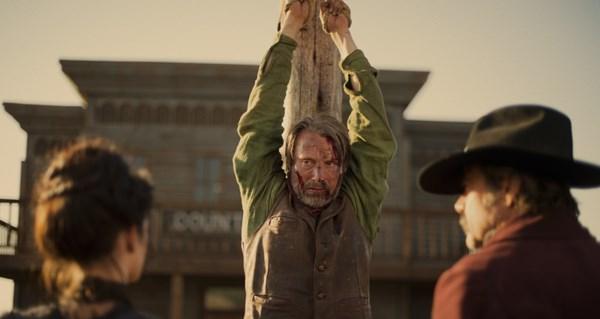 This review contains some plot spoilers.

The most wonderful thing about Kristian Levring’s The Salvation is the camerawork. The lighting and colour saturation coax a remarkable richness from the predominantly drab hues of the American West, with all its browns and dusty yellows, in which the film is set. It is there that former soldier Jon is reunited with his wife and ten-year-old son after seven years apart.  The meeting is awkward, they are practically strangers; but the future is full of hope.  Then, tragically, before they even reach their new home, Jon’s wife and son are murdered.  Jon responds with cold rage, taking in turn the lives of each of the men who killed his family.  This event sets Jon’s life (and the film) on a path of escalating violence.

The beauty drawn from the muted colours of the landscape is mirrored in the performances of the actors.  Emotions are tightly controlled, especially in the case of Jon, played with characteristic skill by Mads Mikkelsen: he expresses with his eyes and a twitch of his mouth a range of feelings from affection to grief to blind fury.  He is well matched by Eva Green, who plays ‘Princess’, the wife of one of the men who murdered Jon’s family.  Her character is mute, but she delivers an expressive performance almost exclusively with her blazing green eyes. Focus and timing are also used to great effect, enhancing tension and emotional impact at various points in the film.  Just one example: Jon is pushed out of the stagecoach carrying his wife and child and is left on a deserted road in the middle of the night. Though he runs as fast as he can, we know that he can never catch it.  The image of that ghostly stagecoach fading into the darkness is so evocative of helplessness and desolation as to be almost poetic.

The story is a fairly straightforward tale of revenge, with many of the elements one would expect from a classic Western, and dialogue as uncomplicated as its plot.  As fate would have it, one of the men responsible for the assault on the newly-reunited family happens to have been the brother of Delarue (Jeffrey Dean Morgan), the local bully, who then gallops into Jon’s town with his gang demanding to know the identity of his brother’s killer.  True to the genre, and perhaps to human nature, the poor, beleaguered townspeople quickly surrender Jon to Delarue in the hope that it will make their own lives easier.  In this they are led by their mayor/undertaker, Keane (Jonathan Pryce), and their sheriff, Mallick (Douglas Henshall), who also doubles as the parish priest – an interesting choice as it makes him responsible for both the temporal and spiritual welfare of the local people.  Jon does not stay captured for long and ends the film by systematically killing every single member of Delarue’s gang, freeing the settlers from the tyranny of the bully.

There is a deliberate messianic element to the film, hinted at first of all by the title.  When Mallick arrests Jon, the characteristically ineffectual sheriff insists that it is better that one sheep die for the good of the flock, though it is doubtful that he is convinced of his own words. As a priest he would of course recognise that to be precisely the reasoning used by the high priest Caiaphas against Jesus.  But Jon is not innocent, nor is he Christ-like in any other way.  Rather the salvation he effects is more the sort that many of the Jews would have expected of their Messiah: a bloody retribution and violent overthrow of the oppressor.  But there is a catch to Jon’s messianic role – two, in fact.

As this is an homage to the classic Western, we are not surprised to learn that the purpose of Delarue’s tyranny is to drive the settlers away, selling their land cheaply as they flee.  Delarue is the visible threat, but even he is only the lackey of powerful businessmen hidden from sight.  In this case, it is not railroads or cattle that fuel their rapacious activities but oil, a clever choice for an early 21st-century audience.  The appeal of oil-rich land requires no explanation, and the desire for it is immediately recognisable as a symbol of insatiable greed.  In eliminating Delarue’s gang, Jon cures the symptom without even coming close to identifying the real illness, and so the sheriff/priest’s declaration that Jon has saved them from their troubles is woefully premature.

The other problem is the question of what happens to the supposed saviour.  Jon finds himself caught up in that altered morality particular to this genre, where the goodies are not exactly good and the baddies have forfeited their rights to a participation in the formal system of justice.  It is a hard, gritty world, and the standards of civilised society do not apply.  But when the threat has been removed, the hero finds that he himself has changed and that there is no longer any place for him in society.

As individuals and as nations, we often react emotionally, allowing our anger to take control and letting ourselves be led by our desire to hurt those who have hurt us.  In so doing, not only do we make the situation worse, but we also find that we have become the exact reflection of those we so ‘righteously’ set out to destroy: we perpetuate the cycle of violence. Without a true understanding of the origins of our conflicts, there can be no resolution.  So, in The Salvation, a film about personal revenge and violent retribution, who is saved?  Precisely no one.