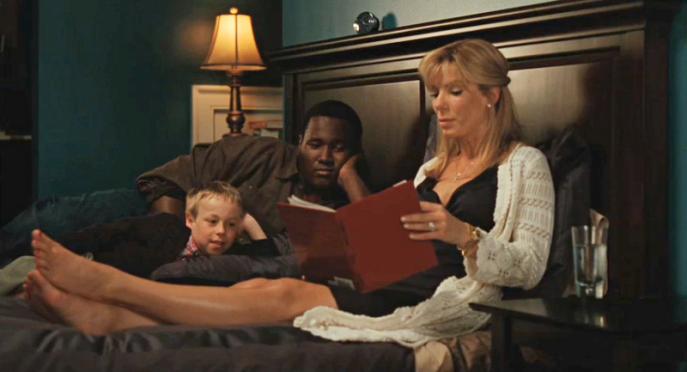 
The blind side pertains in American football to the role of the player assigned to left-tackle; as Leigh Anne Tuohy, played by Sandra Bullock, explains in the opening scene of the film: the left tackle protects ‘the quarter-back from what he can’t see coming.’ These opening lines set the tone around which the plot will unfold. Leigh Anne would never have been able to predict the forthcoming events of her family’s life.

The Tuohy’s have a glittering lifestyle; they live in a mansion, drive expensive cars and generally have everything that money can buy. They are the picture-perfect family. Leigh Anne, a loving mother has a successful career as an interior decorator and her husband Sean, played by country music star, Tim McGraw, owns a series of fast-food-chains and is a good father. They have two children. They are a stereotypical pigeon pair: S.J., a young boy obsessed with television and video-games and Collins, a teenager on the cheerleading squad, as her mother had been. They even manage to find quality time together as a family, making them the envy of every other family. Then there is Big Mike, or, as he prefers to be known Michael (Quinton Aaron).

Michael is the counter-balance to the Tuohy’s, or perhaps rather, weighs down the scales. Michael is from the other side of Memphis. He has never had a bed to sleep in, his mother is a crack addict, his schooling has been inconsistent and unsatisfactory, but the goodwill of a friend has landed him a token-place at Wingate Christian School. This is where he encounters S.J., and consequently the Tuohy’s who in their benevolence and out of a sense of Christian duty open up their hearts and home to Michael. The story is exceedingly typecast and dramatised in all the ways one would expect from the Great American feel-good genre. So much so, that the people sitting behind me in the cinema were usually rightly able to pre-empt the characters’ lines and decide the progression of the plot.

In spite of meeting the pre-conceived expectations though, there were a few surprises and times where the characters acted in unpredictable ways. Sandra Bullock plays her role convincingly: I was able to feel with her and was even moved to tears on a few occasions. I think that Quinton Aaron’s performance has been overshadowed by Bullock’s fame but he certainly deserves mention; I was able equally to sympathise with him in his difficulty and vulnerability. The inimitable Kathy Bates plays Miss Sue, Michael’s tutor. She has a few surprises, leading us to believe that she may not be all she seems. This film also has its share of humour. S.J.’s character reverses the roles and ironically, he plays the ten-year old big brother to Michael. He supports and encourages him to believe in himself, to be self-assured – a quality that, in the past, he had not been given room to realise.

On a different note, The Blind Side gives us occasion to contemplate human goodness; this really did happen to someone, clichéd or not, and lives were in reality changed. It seems fitting that the release of this film in the United States was around Thanksgiving, because it does fill hearts with gratitude and begs, as Sandra Bullock says in her prayer ‘that we may never forget how very fortunate we are’. This theme, as readers of this online journal know is central to Ignatian Spirituality. Saint Ignatius invites us in our Daily Examen, ‘to give thanks to God our Lord for the benefits I have received.’[1] Whilst on Ignatian perspectives, I was struck, towards the end of the film, by the way in which the writer and director, John Lee Hancock, portrays the ‘bad spirit’. In Ignatian Spirituality, the bad spirit works in such a way as to undermine the spirit of the good, in this case, to undermine the benevolence of the character played by Bullock. She is, deceptively led by a series of events, to believe something untrue about herself and to consider all her actions in a negative light. I invite you, when watching to look out for this scene. Ask yourself, what is it about her that makes her susceptible to this attack? Perhaps, even to take this to prayer and consider where in your life this deception may be at work and denying the creative potential of God in your life.

Critics have criticised this film by expressing that it is a film more suited to television than to cinema and should never have premiered on the silver-screen, let alone win an Oscar for Best Actress. I am prepared to admit that the acting and character development, with the exception of Leigh Anne (Bullock) and Michael (Aaron), was flat overall: too syrupy and surreal, but the fact of the matter is that this is a true story and this man is now a player in the American National Football League. This would not have been possible without human action. It is refreshing to see the more positive aspects of human relationships, to go to the cinema and leave with a flicker of hope – glimpsing even if only for a moment at the ideal – of what is possible through simple human kindness. Even after the intensely sugary taste leaves my pallet and passes through my oesophagus, I am left thinking that it was a worthwhile two hours.