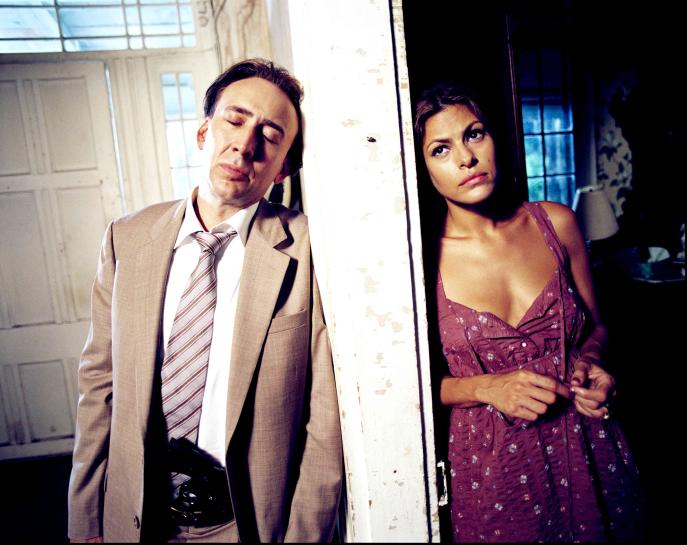 
Bad Lieutenant: Port of Call New Orleans finds director Werner Herzog reworking and reinventing the well established and long stale ‘bad cop’ genre of film-making. Channelling the ghost of Abel Ferrara’s 1992 movie of the same name, relocating to a post-Katrina New Orleans overflowing with narcotics rather than water, and placing a Nicholas Cage exuding a sort of sluggish, doped up dynamism in the central role, Herzog creates a context within which he can achieve the contradictions and confusions needed when exploring the gulf created when morality and the law diverge, a gulf in which all in the film become immersed.

From the opening scene, the film sets out to confuse, to blur lines long drawn in the audience’s minds. When Cage’s foul-mouthed and light-fingered Terence McDonagh, along with his somewhat despicable partner (Val Kilmer), stumbles across a man trapped in a cell in the face of the rising floodwaters of Katrina, his first urge is to berate the man, mock his helplessness and voice his ruthless hatred for those outside the law. He then promptly jumps in to the snake-infested waters to make the rescue. This first act of the film proves to be crucial to McDonagh’s life, and to the film, and the dichotomy shown in this scene becomes a microcosm for both these things. This rescue results in two things for McDonagh: his decoration and promotion, and a lifelong back injury requiring regular doses of painkillers, a requirement which leads him into addiction and reliance. A bad lieutenant now, certainly, but not a bad person.

Although a lieutenant addicted to and binging on a variety of drugs whilst working to solve a mass murder is a ‘bad’ lieutenant, he is still better at his job than the other detectives in the police force. He repeatedly makes connections others could not have made, neutralises potentially fatal shoot outs and spots lies and deceit in spite of suffering to maintain a grip on reality. Of course, maybe losing sight of the mundane helps when dealing with the extreme and horrible crimes of a deprived city brought to its knees by natural catastrophe, but then again, hallucinating about a troupe of colourful iguanas whilst trying to monitor a suspect must get in the way of the job a little.

Herzog’s approach to the subject matter is unique. Never before have I laughed so much in a film about poverty, deprivation, struggle, murder and indifference. Herzog manipulates the expectations and sensitivities of the audience in a way only a brilliant film-maker and story-teller could. At its heart though, Bad Lieutenant asks some fundamental questions about morality. The obvious one is: where does morality stand in relation to the law, and how far can one go to achieve justice in spite of the law? But Herzog seems more interested in asking what makes someone bad. McDonagh is, in a sense, a bad lieutenant, a bad lawman, but he is also a brilliant detective, and a fearless and selfless soldier of justice. He is an addict, and he does some horrible things to people. But he does so to achieve his aims: to find justice for a murdered family and lock up a dangerous and morally bankrupt man.

This question is compounded when, as in the film, the law actively gets in the way of justice. McDonagh knows for certain all along who committed the murders, but the law prevents him from acting on this certain knowledge. How far can one go to ensure justice is done? When does the pursuit of justice become ‘bad’? I think the answer lies in the environment in which the film finds itself. In a place crippled by the earth and abandoned by the world, where poverty and inequality are upheld by law, moral absolutes are harder to discern. Criminals catch criminals. The law is a tool, not a principle. Making ‘good’ of a ‘bad’ situation is the work of a martyr, and a badly behaved one at that.

The Chronicles of Narnia: Voyage of the Dawn Treader