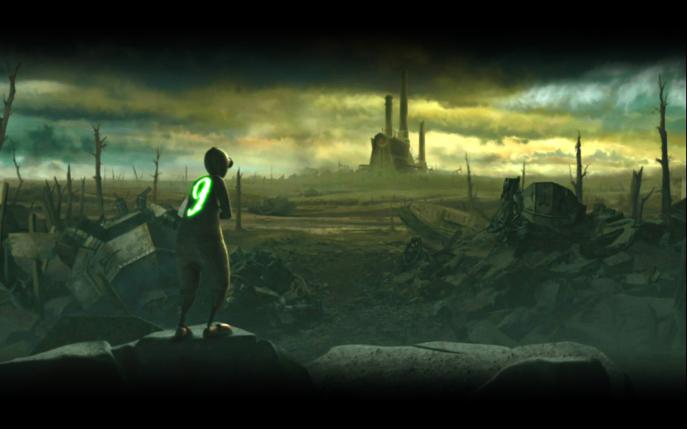 
It would be fair to mistake the bespectacled figure on the poster advertising 9 for some kind of post-apocalyptic lollipop lady who is worried about the prospect of ‘doing the school shift’ on the remains of a chemical war zone. But this strange figure is in fact Elijah Wood masquerading as the animated protagonist 9 in the film of the same name. Yes, 9 is a sublime piece of animated cinema, a visual feast, the unlikely stars being a faction of animated rag dolls. These dolls are not your traditional, run of the mill, rag dolls. No, Shane Acker’s creations are more like something out of a Brothers Grimm fairy tale, their appearance more junkyard chic than the foppish dungareed fellow you may have once had sitting at the end of your bed. In fact, the aesthetical qualities of the characters are reflective of the barren landscape on which the film takes place. They are held together with zips, stitches and whatever else these charming little beings can get their hands on.

The audience are straight away introduced to poor old 9 who finds himself in a world where humans no longer exist, a world of ruin and desolation. Acker creates a bleak wasteland scattered with old thimbles, screws and battered pieces of wood – all the sorts of things one might find following human extinction at the hands of chemical weaponry. 9 finds himself on his own until he is saved by 2 (clearly character names weren’t a problem for Acker), who takes him to meet some of the other ‘stichpunks’ who have survived and now reside in what appears to be an old cathedral. Whilst all the dolls share unifying qualities in terms of their appearance, they are visibly different. There’s number 8 (Fred Tatasciore), a burly doll often seen wielding a meat cleaver who acts as the defender of the group acting under orders from 1 (Christopher Plummer), the elder of the group, whose papal-like authority is heightened by his mitre, crosier and cape. Here in the old cathedral, the dolls live in fear of the ‘the beast’ (essentially an aggressive mechanical dog) and the film’s major villains, the sentient machines, whose goal is, in true villainous fashion, total annihilation.

Plot-wise the film is fairly basic, the sole aim of the dolls being to defeat the evil machines. In fact, I wondered if the plot was an afterthought to the other aspects of the film. Call me old fashioned, but I wanted more in terms of the love interest between doll number 7 (Jennifer Connelly) and 9 (Elijah Wood), which remained at most implied and largely unfinished. Moreover, nobody seems saddened by the extinction and death of billions of people – but then again why should they? Either way, I think a great deal of the film’s flaws fade into the background and take a back seat to the charm of the little dolls and the world Acker creates. They are a source of joy and redemption in the bleak post-apocalyptic world created by human beings. In contrast to the chaos and disorder of the landscape there is something beautiful in the way the characters move, toddling around the war zone like existential jelly babies.

But aside from a purely aesthetic perspective, the characters are clever little creations in that they act as conduits for Acker’s clever social commentary. Primarily the focus of the film is power and the responsibilities that it brings. The humans are destroyed by their abuse of power. An abuse of power at high government level leads to the malevolent uprising of the machines. But also the dolls are almost destroyed by the elder 1’s inability to face the world and the power he holds. He is their self-imposed leader, but rather than rallying the others and helping those taken hostage by the machines, he forces the group to stay and hide with him in the cathedral. The power 1 possesses is not a force for good but rather a tool to oppress and to maintain the status quo, when ultimately self-sacrifice is needed (and thankfully learnt) come the end of the film.

Whilst the film is not without its faults, it would be unfair to let these faults override the beauty of this brief but frankly moving film about responsibility and friendships. Shane Acker manages to do something very few other directors have managed to do, in that he cleverly blurs the line between the past and future. He explores very modern, even futuristic ideas (machines, artificial intelligence, chemical warfare, extinction of the human race) but does so within the pre-text of the past. Because there is an element of fantasy in the film he is not limited by the facts of human history and thus can let his imagination run wild, which I think it is safe to say he does rather well.

A Dream About Heaven