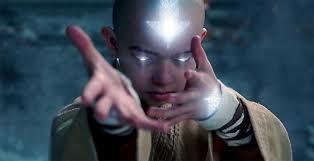 
Much has been written about the awfulness of The Last Airbender and it would feel like kicking the proverbial kitten to produce another detailed review of it. For what it’s worth then, let me join the queue and aim a foot at where it lies quivering on the floor: The Last Airbender is a total stinker of a film. I don’t recommend anyone watching it, not even for the thrill of it’s-so-bad-it’s-great, because it isn’t. Some of the reviews in the link above are worth scanning just for the sight of film critics pulling out their thesauri and typing out every synonym of the word ‘bad’. It’s been ridiculed, parodied, and even accused of being racist.

A brief summary of the plot – humankind is divided into four tribes, each affiliated with one of the four elements. Within each tribe exist ‘benders’ (yes – do not watch this film with teenage boys), who are able to control their respective element. The fire people want to take over the world. The only one who can stop them is a small airbending boy called Aang who is an Avatar (no relation), which means he can bend all four elements. The film follows the start of his journey to his friends in the water kingdom and towards his spiritual and emotional enlightenment. You can fill in any gaps yourself with the quest-by-numbers booklet available at the back of the sacred grove.

What stands out for me from the film is the combination of such lazy and clichéd story-telling and the mishmash of spiritual truths that the story conveys. It’s fascinating to see how Hollywood does ‘spirituality’. Aang is like Jesus, in that he is the child born to save; he’s Buddhist in his training in meditation and yoga; and he’s like Krishna in his reincarnations. The lessons he must learn are chapter titles from self-help books – Acknowledge Your Anger; Express Your Feelings; Face Your Hurt. Around him cluster ‘spiritual people’: the water people are Inuits, the fire people Indians, the earth people Chinese (perhaps; the whole thing starts to blur here), and Aang seems Tibetan. He must conquer his enemies not through violence but through recognising his own power, controlling it and using it for good.

What does this all mean? These truths are La-Z-Wisdom, wisdom-lite, like shaking a glass of water and telling a child that this is what an ocean storm is like. The question is whether a film like The Last Airbender offers its young audience these headline insights in such a way as to entice them to greater searching of their own, or whether it cloys their minds and hearts with saccharine solutions. Obviously the film does not attempt to be a work of philosophy or theology, but since it has chosen to deal with issues of human growth, morality and sacrifice, then it certainly invites this type of analysis.

Its mushing together of several faith traditions is certainly confusing. Whether there is a coherent mythology behind the film might become apparent in the sequels, but whatever it is, Aang’s mixture of animism, paganism, divine sacrifice, the faiths described above (though, predictably, not Islam, which gets its caricature in the form of the violent and slavishly obedient fire people) combined with the worst of ‘new-age spirituality’ (for example: ‘They prayed to the moon spirit for days and dipped me into the sacred waters’), creates a horrible slush-puppy of belief. It’s lazy interfaith thinking at its worst, where each tradition loses its sense of identity and melds into one.

But putting aside complaints about the accuracy of its presentation of the faiths, what about the argument that the moral of the film is clearly one that is ‘good’ – self-sacrifice, courage, peacefulness rather than greed, etc. – and that this supersedes any issues we adults may have about the clarity of its faith portrayal? Surely the film has taken much that is positive from disparate faiths and presenting this as an ideal to aspire to can only be a good thing. Although a child might not come away knowing anything clearly about any of the faiths (or, from a Christian perspective, anything approximating to what we believe as Truth), at the worst she or he will come away with some moral lessons about how to live well. Herein lies the problem of its story-telling. As noted above, the film is very poorly done – virtually every aspect of it is filled with blunders from script to pacing to special effects. I’d suggest there are at least two significant consequences of this in terms of it delivering its message of ‘being good’.

Firstly, the weakness of the story-telling repels rather than invites imaginative and emotional involvement. Without any engagement with the characters or their journeys it’s hard to see exactly how any moral quality the story holds will be communicated. The writer, Ben Okri has produced meditations on the power of story and our role as story-telling beings (see A Way of Being Free, In Arcadia, or Astonishing the Gods as examples) and he has noted that all the great leaders of the faith were excellent story tellers. A good story works inside you long after it has finished being told; a bad story washes off in the rain.

Secondly, the cynicism with which the film has been produced, taking a popular children’s cartoon and computer game and churning out such a lazy film version, will not go unnoticed by its audience. Anyone who is a parent or has spent time with young children knows how high a standard they have for good media. One of the few benefits that media saturation has on children is that they can become very adept analysts of it very early on, and can spot a dud a mile off. Chesterton saw this in Dickens – ‘The whole difference between construction and creation is exactly this: that a thing constructed can only be loved after it is constructed; but a thing created is loved before it exists.’ (G.K. Chesterton, Appreciations and Criticisms)

The Last Airbender was not loved by its constructors and is reaping the consequences of this now. Its disregard for its audience clashes with the morality it purports to purvey, and this is the second of its great failures in terms of enriching its audience’s lives. This is why trashing the film feels doubly harsh – it never stood a chance, and anything that was loved so little in its formation doesn’t deserve a second round of abuse.

What is Ignatian leadership?