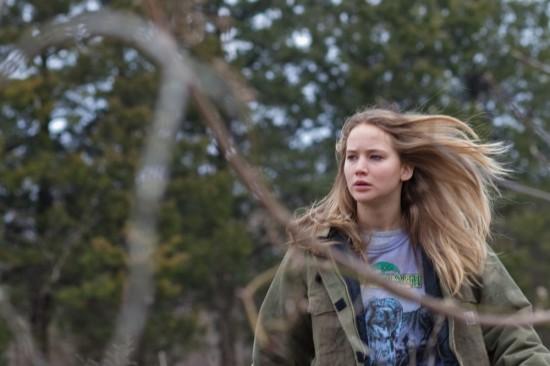 
The Missouri Ozark forests in winter and their unkempt homesteads and rusting pickups are the bitter physical landscape of this haunting film. The closed in, human face of rural, poor, white, backwoods-America is unflinchingly but lovingly presented by Director Debra Granik based on a 2006 novel by Daniel Woodrell.

At 17, Ree Dolly, is capably caring for her mute, depressed mother and two young siblings in a shack on a forestry plantation. They are barely surviving – food is scarce and comes thanks to the uncertain charity of neighbours. But, Ree’s purity and their family dignity and love is ever present. We see Ree helping the children with maths on the walk to school, we see them playing, and she teaches them to cook. Their father, a crystal meth producer, has absconded, leaving the house and plot as a bond for his bail. If he fails to appear at court Ree learns that they will be made homeless within weeks. Ree then attempts to find her father by visiting her uncle, other relatives, homesteads and the criminal underworld – each visit is preceded by a long walk through a winter landscape of great trees, burnt out Methamphetamine stills and abandoned vehicles. This is no winter wonderland, nothing is picturesque but everything has its own bleak beauty.

Thankfully the futileness of Ree’s task doesn’t occur to her - what does she think she can achieve even if she finds her father? Persuade him to go to court? Really? Her focus is undiminished by such questioning. This is for the jaded audience – not for Ree. Their father may be a criminal but their love for him is real and a wardrobe of his shirts, cowboy boots and his banjo are their sensory totems of him.

Ree’s encounters on her bleak search are mainly tense, violent, depressing, and lead nowhere. Women are as intimidating as men. Knowing she will have to venture further afield in her search, Ree teaches her brother and sister survival skills - to shoot, skin and gut squirrel for food. Ree is constantly blocked in her attempts to uncover the truth and she is viciously beaten as a warning. When it is hinted that her father is dead – Ree’s purpose becomes to prove this to stop the house and land being repossessed. As the family is preparing for the worst, including giving the little boy to relatives – (he ‘shines’ for them, not the little girl) a harrowing delegation of women have a change of heart and take Ree to her father’s corpse which she has to handle in freezing water on the bottom of a shallow lake. His two hands are sawn off (as proof for the police that he’s dead) as Ree mutely howls in grief and horror. Finally the family’s future is safe.

These are no Beverley Hillbillies – life is a matter of raw survival - there are clearly no hairdressers, no handbags, no tumble dryers, no lipstick. When Ree walks we can see that she carries nothing with her for the journey. Even her hat is lost at some point.

Logging, hunting and the production of crystal meth are the local economy. Closing ranks against authority, preserving isolation, honour and secrets are an unbreakable lore. A birthday party of folk singing fails to lighten the tone – this isn’t a community, more a gallery of hardened faces with scars, deeply etched lines and downturned mouths.

If we can conceive of the Common Good; then this is the Common Bad - yet a pure child arises from it, strives for truth, and turns the other cheek. Drugs have corrupted this community - where life is worthless, dishonesty is the norm and power only equals intimidation. But Ree has no power – she stands in total vulnerability between the known and the unknown. As she steps into the unknown in her search for truth she becomes an outsider but also a leader. In this place it seems that ‘Hell is other People’, except that unlike Sartre’s sealed room in In Camera, Ree is, herself, a virtual ladder. It takes a while, but everyone she encounters moves a step up out of their own inferno. This sounds dramatic but it’s the opposite, people just become a little less bad.

The plot is a simple journey of a wise innocent’s quest into adult-world darkness with some weak allies (neighbours give them food and Ree’s uncle, Teardrop, is eventually courageous). Ree’s character is beautifully acted by Jennifer Lawrence. But she begins as totally good and ends as totally good. And I was insufficiently concerned with the other characters to care about their modest moral improvement. This contributes to the film feeling like little more than a piece of flat art. And the stunning photography of trees and mountain faces, which seem to have deeper crevices than the mountains and more bark than the trees, enhances the sense that this is a place for the pages of National Geographic – for observation and wonder, not engagement.