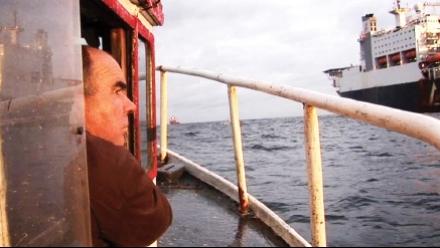 
Fourteen years ago a group of engineers discovered a gas field off the coast of Western Ireland. By 2001 the field was declared a commercially viable project and four years later preparations began to create an inland refinery in a small town called Ballinaboy that would be able to process and deliver the gas across the country. A long, underwater and underground pipe would transport the gas from the drilling platform out at sea to the refinery. The Pipe is a documentary describing the efforts of the locals in Rossport, Co. Mayo to prevent what they see as being the destruction of their livelihoods and their patch of sea by the laying of the pipe. It’s a story of wealth and power versus those without – fishermen, farmers, peat-cutters, school teachers.

The film begins with the protests in 2008 and 2009 as Shell’s plans began to be put into motion. This rage of injustice pervades the film and Rossport’s residents as they face up to the full commercial force of a vast company that has all the support of their government and all the strength that a state has. The locals’ argument that running the pipe through their land would disrupt local fishing, and would risk huge environmental disaster – the gas would be pumped at high pressure through unstable bog land – is met with the logic of money by Shell; that this is the most sensible option. Jobs will come to the area. Ireland would become more self-sufficient. As the protests fail, the protesters become more desperate: men and women swimming in the sea near a digger clawing up soil from the sea bed; one man throws himself underneath the claw and is submerged in rock and sand.

This discrepancy in mechanical power is matched in the legal resources both sides bring to the table; whilst a lawyer drives a handful of complaints from his neighbours to the local court, Shell simply buy shares in the common land through which they want to drive the pipe, thus allowing them to start exploration. Frustration builds and builds, interspersed with a few moments of respite – the feet of the security guards shipped in to defend the construction site are swamped by the sea and they leap and hop out of its way.

It’s very clear that as well as the damage that may be wreaked in the future, the community in Rossport is already suffering. As the local garda haul away their neighbours and friends from the protests, the fishermen are having their solidarity split apart by huge offers of compensation. A local school teacher, Moura, swears blind to the pub that writing letters and writs will do nothing and that without direct action they have sold out; the meeting ends in recrimination. Willie Corduff, a farmer whose land will be encircled by the proposed pipe, warns that these divisions are not temporary: ‘our families will be asking after their families how they abused them’, as if Ireland hasn’t already had enough of sons and daughters suffering for the sins of their parents and grandparents.

What is at stake are not just ways of life that have been freely chosen, learnt and adapted through generations, but the ability to live free of outside forces restricting choices. One of the sadnesses underpinning the campaign is the sense of how fast something that has taken years and years to create can be damaged, and how slow any healing will be. There is a touching scene of a sit-in protest reciting a Rosary that becomes louder and louder as the police move in, and the image cuts back through centuries of time of ordinary people using the prayer in times of crisis, to request intercession. There’s a sudden link through the ritualistic language to the catholicity of the Church, to all those who have called for help at any time and in any place, and will do in the future long after Rossport and Shell are just names in a story.

As The Pipe is such an angry film, and Shell refused to take part in its filming, there is a frustrating lack of information about the details. A tantalising shot of a letter from the parish priest saying that the parishioners aren’t opposed to the refinery per se but just want it moved elsewhere, calls in questions about what is at stake for Shell. Starting from the assumption that Shell as an organisation is not inherently evil, but is motivated by what they see as a particular good, it would have been fascinating to know the dry details of the project: how much would it cost them to move the refinery elsewhere, why do they want it at Ballinaboy, what form of accountability do they actually have to customers and citizens, and who, ultimately, is the (most likely male) person who decides? More information on the ongoing protests can be found in the links at the bottom of this page, but even so Shell are doing themselves no favours by refusing to present their story.

Despite this lack of specifics, the film operates on gut level in the heroism of the Rossport locals. Moura’s journey from volatile meeting-breaker to the hunger striker locked in her car, refusing packets of biscuits even as the monstrous Solitaire, the pipe-laying ship, leaves the harbour, is just one of several stories. The fisherman Pat O’Donnell and his boat John Michelle, facing up to Solitaire as he seeks to protect his crab pots; Mary Curloff waiting for her husband to be released from prison. The film ends with a temporary success for them after 8 years of campaigning: an accidental/miraculous breakage aboard Solitaire means that it must leave the harbour for the winter. Though it feels like a happy ending, the real battle between power and people is continuing.

For more information on the campaign Shell to Sea: http://www.shelltosea.com/

Advent Examen: 3. The story of my life

The Lord Jesus, the Gentle Judge