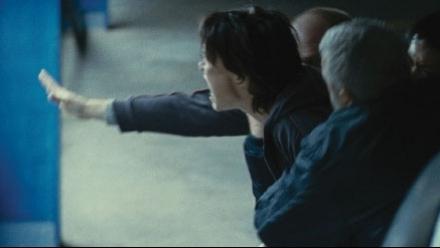 This film offers an important insight into the plight faced by many sans papiers – undocumented migrants – living in Western Europe. Illègal tells the story of Tania, a Russian undocumented mother and her teenage son, Ivan. They have lived in Belgium for eight years; she is working and he is advancing through secondary school.

The direction of the film is set within the first few minutes when Tania opens a letter that demands her removal from the country. Her application for sejour in Belgium has been refused. She knows what she has to do: she buys a bottle of vodka, drinks half of it, douses her hands in the remaining half and burns her fingertips on a red-hot iron... Her fingerprints are destroyed.

Tania continues living and working and providing for her son until, unexpectedly, stepping down from a bus, she is asked to show her papers. Not able to do so, she panics, strikes out at the officers and gives instructions for her son to run. Her primary concern is that Ivan escapes. He does. She is restrained, interviewed and taken to an immigration ‘holding centre.’

The film, which unfolds at a pace, concentrates the viewer’s attention on Tania by drawing them into the mother’s fear and uncertainty. It often erupts into panic as the reality of her situation sinks in and as she begins to contemplate the implications of her detention on her son Ivan, who as a young teenager separated from his mother’s protection and love, is vulnerable and at risk, both from the authorities and, from the local Russian landlords.

Confronted with fear, for herself and for her son, the telephone becomes the sole lifeline to the outside world. It offers connectedness as it links Tania with her son dispelling, just for a moment, until the money runs out, the separation that has forced itself upon them. Its location in the corridor, which is dark and depressing, seems to illuminate those standing around it thus elevating it to the role of symbol, a symbol of hope for the one making the call and those gathered around waiting their turn.

Everything else though seems to accentuate the detainee’s sense of isolation and confusion; the window at the end of the corridor which shows the tantalising nearness of the road; the regularity of the bus that stops opposite and which provides a cruel reminder of the normality punctuating the world outside; the queue of people at the bus stop who stare across at the caged women and families. Their muted faces conveying an air of disapproval for les illègals expressing silently the sentiment of the crowd at large.

All of this contributes to Tania’s anxiety which, moreover, is fuelled by an overwhelming sense of powerlessness as she – and we – struggle to understand how things work. Procedures are never explained, except by other detainees who’ve managed to fathom them out for themselves: those who have evidently been held for long and lingering periods of time.

Aïssa, one such detainee from Mali, with whom Tania shares a room, is her finest instructor. When Tania meets her, she’s already resisted several attempted removals and has suffered gravely as a consequence. One discovers, as the film moves on, that her cuts and bruises have been inflicted by the removal guards who, after each failed attempt, return her broken body to the Centre. Eventually, being able to resist no more, yet knowing that a return to Mali would be a fate worse than death, she takes her own life.

The director of Illègal, Olivier Masset-Depasse, has made some clear editorial choices with this film. Although he raises significant questions about fortress Europe’s regard and treatment of its migrants and asylum seekers, and doesn’t shy away from the thorny issue of child detention and the detention of families, he doesn’t become distracted from developing a single narrative line. That is, to tell the story of a mother’s love for her separated child. Placing this simple, clear, universal narrative at its heart allows everything else to be treated tangentially and, as such, in relation to the mother’s love. The film thus never becomes entangled in the political debate but remains rooted instead in the human experience.

This said, the anomalies of European asylum and immigration law and the way they can divide families and children, like Tania and Ivan, are allowed to emerge. One sees the implications, for example, of Dublin II, a European Convention, which allows countries like Belgium and the UK to deport an asylum applicant to the European country they first arrived in or passed through.

This impacts Tanya’s story, when, having taken the identity of an undocumented friend, Zina, from Belarus, and having made an application for asylum on the strength of it, finds out that she’s been traced transiting years previously through Poland. Under the Dublin Convention, the authorities issue a deportation order which, within weeks, they try to enforce. It fails, not once but twice. The second failed removal results in hospitalisation for Tania who, like Aïssa, is badly beaten by the removal guards.

One cannot help but be moved by Illègal and as well, to be interrogated by the process that makes prisoners of innocent people. Many have fled persecution but have had a refusal made on their claim for protection. Others have entered legally but, after overstaying a visa, have slipped into illegality in terms of their right to stay in the country. Others again have entered the fortress clandestinely and, once within, have slipped into a shadow world of living in fear with no papers and prone to awful exploitation.

Invariably, people go to great lengths to conceal their identity and often, as in Tania’s case, are forced to weave a thick and complicated web of deceit in order to remain anonymous. As they do, and as portrayed in the film, people suffer the effects of a dehumanising and oppressive system that, ultimately, serves neither the interests of the detained migrant nor those of the detaining country.

The
Jesuit Refugee Service (JRS-UK) organise volunteers to visit detainees in
Harmondworth & Colnbrook Immigration Removal Centre at Heathrow. If you
would like to join their volunteer visiting scheme then contact Jim on 020 7357
0974

What does faithfulness involve?