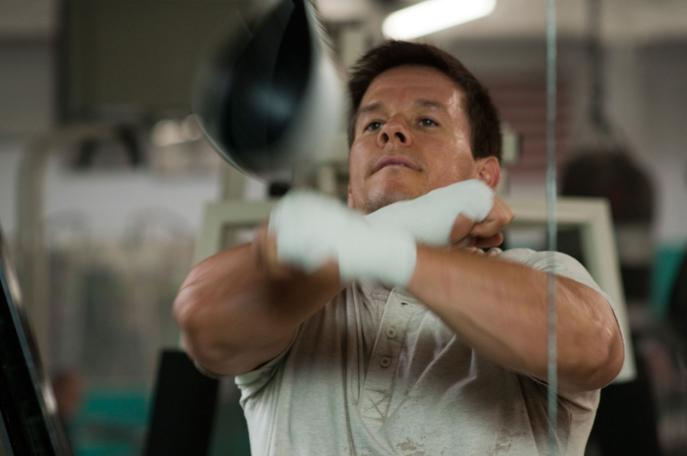 
When I was 21 I stood outside a boxing club in Boston, Massachusetts looking through an open door watching the men inside knock the daylights out of each other. I felt every blow, I felt every cut. There is no sound like the air being squeezed out of a man’s lungs as he hits the canvas. An old man turned to me and said this is the home of the Fighting Irish. I smiled and said they certainly impressed me and made reference to my ancestors from Limerick. I hoped it would save me from being dragged into the ring, but my Scottish brogue was greeted with respect. We talked for an hour about famous boxers and fights. He wiped the floor with me with his knowledge. But I did avoid being punched.

The Fighter made me think of that incident twenty years ago. David O. Russell’s film entices you into the ring, dances with you for a few rounds, jabbing and shoving you onto your ropes of reflection and then issues a direct punch to your sensibilities of whether you find yourself endeared to the characters and their life. It’s good, very good. The film was inspired by a true story tracking the life of blue collar ‘Irish’ Micky Ward (Mark Wahlberg) and his drug addicted half-brother, Dicky Eklund (Christian Bale). Ward is a bulked up boxer who is shy and reflective, but trains with precision and a ruthlessness that seethes through his grey sweated hoodie. He is proud to be Fighting Irish, he is proud of his roots in small town Lowell, Massachusetts. His relationship with his brother Eklund is remarkable and moving. For so much of the film the countless let downs and mistakes made by his selfish drug addicted half-brother make you want to see Eklund receive his comeuppance.

Both actors put in a remarkable performance. Ward is exasperated and proud of Eklund’s legacy. Throughout the film we are drawn back to Eklund’s alleged flooring of Sugar Ray Leonard in a fight that belongs to the memory. Did he or didn’t he? The grainy footage and recollections are inconclusive. Is it a metaphor for Eklund’s life? Did he or didn’t he truly achieve anything?

The film exposes the crack cocaine lifestyle of Eklund as a documentary team film and record every aspect of his sad and degenerate life. He claims to his family that it is a movie that is recording his comeback to the big time. You know there is no way he is coming back and Bale’s performance is excellent at exposing the old adage, the road to failure is paved with good intentions. His friends swirl through the film like smoke in a crack pipe.

Ward finds his inspiration split between his love for his half-brother and his love for a feisty barmaid, Charlene (Amy Adams). In a wonderful scene she emotionally jabs with Ward whilst working behind a bar, coaxing and sparring with him with her sharp wit and blunt Irish American blue collar grit. Their relationship brings warmth and hope to the film and Ward finds the consistency and reliability missing from all other aspects of his life.

The overarching and all consuming matriarch (Melissa Leo) dominates the life of both her sons. She is a caricature of suffocation and delusion. Her seven daughters are paraded through the film grotesquely like an ‘Oirish’ Hairbear Bunch. They look as if they have been dragged through an Irish feis backwards. She strides like a colossus through all their lives and cannot accept anyone else managing the affairs of her sons as well as she. She is a failed mother and comforts herself with a view of her life that is so far removed from reality. However, it is a great performance; she is so believable.

The script is fast and cutting. It spits out one-liners that are blood drenched. The direction is refreshing when you compare it to a long line of boxing films. The sheer poetry and pain of Paul Newman’s Somebody up there likes me, the humour of the Rocky franchise, and the realism and brutality of Raging Bull are all there to be seen in this production. But the final scenes of the film are brave and believable. By now you feel his punches, by now you want him to win. At times you can forget too easily that it is not for real and that Ward (Wahlberg) is acting. Or is he?

It was shot in only 33 days after years of planning. It makes you think about relationships, families, expectations won and lost, of love and the need to be loved, it drags you into the ring and makes you confront the punches all of us have to take through life. As the credits roll you are given a glimpse of the real Ward and Eklund and the similarities played by the actors to their character traits are remarkable. It is a technique by the director that was used to such great effect in Touching the Void, but it still works so well here too. Get yourself a ringside ticket, sit back and spit out your reticence. You will still be standing at the end of it all. Trust me.

Evelyn Waugh’s Edmund Campion: ‘Walking at our elbow’
A Jesuit narrative of the Gunpowder Plot
Seven years in Westminster: Where are we now?
To Serve, to Accompany, to Defend
Stations of the Cross: 9. Jesus falls for the third time