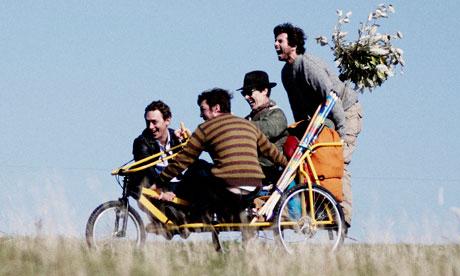 
The road trip movie, in its various guises, has been done so many times that to give it a new twist is no mean feat. The ‘what happens in Vegas, stays in Vegas’ mantra has been adapted and used to cover up all manner of sins, but none quite like the denouement of Third Star. The plot is fairly plateaued – unlike the Pembrokeshire scenery that hosts the action – until its conclusion, which places a prism in front of the fairly linear story that leads up to it and distorts the images of all of the characters.

The fact that Third Star tells the story of 29-year-old terminal cancer patient, James (Benedict Cumberbatch) says all there is to say about the prevailing tone of the film. His three close friends agree to take him on a camping trip to his favourite place, the beautiful Barafundle Bay on the Welsh coast. The expedition brings the usual revelations, arguments, reconciliations, mishaps and comedy that sustain the momentum of any such film. The four leads fill the roles well and there is a real investment in their group dynamic as well their individual stories by the end of the film.

James’ imminent death poses different challenges to all three of his companions. Chelsea playboy, Miles (JJ Feild), who as a teenager lost his father to cancer, finds himself unable to confront the horror of his friend’s illness, preferring to distance himself from its reality. His detachment, though, makes him the refreshing – if at times abrasive – puncture that bursts the bubble of self-pity into which the dialogue occasionally slips. Understandably so; it can’t be easy to write a narrative dealing so inevitably with eschatological themes without throwing in the odd cliché. A discussion about what happens after death – with one of the group displaying a kind of scientific agnosticism; one an inclination to believe in ‘something’, maybe God; one an affection for the idea of reincarnation; and another a complete rejection of anything – is hardly an original dialogue, and not one that is articulated memorably, but it is a useful (although not very subtle) exercise in characterisation. The script is overly heavy at times, but it seems as if the writer has recognised this and used the voice of Miles to re-direct the existential ponderings back towards the banter between a group of twenty-something males: ‘this trip is like going for a walk with a sick, white Oprah – you would hate you right now’.

The commitment to the journey shown by Bill (Adam Robertson) drives the group forward – this trip must be an adventure, with fireworks, a ceremonial tree-planting...the works. Living temporarily in this world of ideals is an obvious way for him to escape the tangible reality of James’ cancer and of his own relationship. Chided by his friends for abandoning the ambitions of his youth, he is wrestling dually with his fears of family responsibility and of walking away from it. His own situation is a microcosm of a sweeping question of the film: does it take more courage to accept and commit to the hand that life deals you, or to chase the ideals you dream of?

The quartet is completed and led by Davy (Tom Burke), who since his recent redundancy has undertaken much of James’ care and supported his family. He is repeatedly accused of thriving on James’ dependency on him. The challenge to Davy, which he doesn’t recognise, is not to stay with his friend rather than walk away – the latter is clearly not an option to him – but to make something more of the situation for both of them than a morbid indulgence in the demands placed on him. Friends don’t stand before God and take vows of ‘for better, for worse’, but they do take them in an unspoken way: Davy’s vow to James should require him not just to stand tall and carry him when the going gets tough but to stoop low with him and recognise that the ‘worse’ is as sacred an experience as the ‘better’. To find what is holy in suffering might seem an impossible task, but it is not achieved by taking charge and pushing forward but by sitting, waiting and being – sharing in the ‘is-ness’ that James believes in.

The film is a poignant exploration of the effect of terminal illness more on those who will be left behind than on the patient – as James says, ‘the sickness may be mine, but the tragedy is theirs’. But it brings to mind another tragedy: that so many people lack the end of life care and companionship that James has in abundance. At the other end of the age spectrum, to face illness can be no less scary, painful or difficult, but for some reason we are less ready to offer comfort and we justify this on the basis that a life well lived lessens the anguish. For those who face death alone, both the sickness and the tragedy are theirs, and this should place on all of us a duty of care.

The conclusion is not mine to spoil, and in any case the questions it raises are well rehearsed by many more qualified to discuss them than I. But the lasting imagery of the film is that of footprints in the sand of Barafundle Bay. When four sets of footprints became three, however agonising it may have been for James’ friends, it was then that they carried him.

Christianity in Evolution: An Exploration