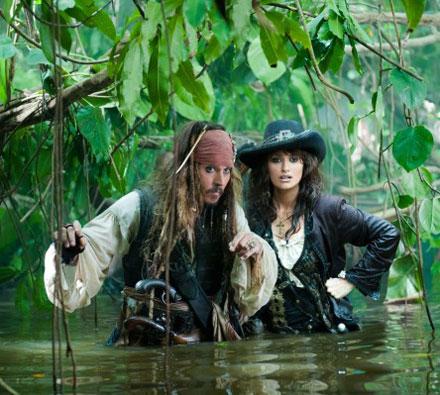 Finally the buckle has come off the swash of the Pirates of the Caribbean franchise to leave a sorry sight and a few disgruntled fans. I admit I did not have high expectations going to see the film, but I had witnessed firsthand the filming in Greenwich late last year and the sheer scale of what was constructed in Greenwich Park was impressive. They had built stables for around one hundred horses and Georgian streets to complement Wren’s masterpiece. This franchise spends money to make money. But somehow the charm, wit and action of the previous films have disappeared on the tide. I am trying to dig for some treasure here but it is difficult.

The film opens to find Captain Jack Sparrow (Johnny Depp) travelling to London to find out who has been impersonating him trying to recruit a ship’s crew to locate the Fountain of Youth. King George II (Richard Griffiths) hears of this plan too and orders Captain Hector Barbossa (Geoffrey Rush) to lead the expedition as a privateer in the service of the King’s Navy in pursuit of the same goal. What is it about Geoffrey Rush and the British Royal Family? Jack Sparrow, sorry Captain Jack Sparrow to give him his proper title, is caught, questioned by the King, then makes his escape. In fleeing from the red coats he stumbles into his father, Captain Teague (Keith Richards). He warns Jack of the perils that lie ahead, but I just wanted Johnny Depp to keep his Keith Richards impression going for a lot longer to see how accurate it was against his mentor. He has been impersonating Richards for years and this was an opportunity to see just how good it was, but it was fleeting and disappointing.

For a pirate who is half drunk, half sober, it is curious that you never actually see him drink anything. He piles on layers of eyeliner to enhance his legendary eye rolling technique followed by a dip of the shoulders and a swagger, but in truth he needs to sober up and have strong words with the scriptwriters. In the words of another famous American who struggled with the bottle and liked to wear strange clothes – ‘a little less conversation, a little more action please.’

Jack discovers that the person who has been impersonating him is Angelica (Penelope Cruz), his former lover and daughter of another famous pirate, one that actually existed, Blackbeard (Ian McShane). Remarkably in one of very few sword scenes for a pirate film they spark steel together and try to convince us that there had been a previous chemistry between them. Cruz and Depp have about as much passion for each other as Celtic F.C. manager Neil Lennon has with his postman. As an ardent fan of Penelope Cruz, whose skills as an actress Pedro Almodóvar has honed to a fine degree, her talents are wasted here. She looks great, in fact she looks fantastic, but this is one Spanish conquistador who appeared to be given the lines of Banderas as Puss in Boots in Shrek rather than the feisty, sultry and passionate Spanish temptress she can play so well. To give Cruz her due she has some good lines and perhaps she was thinking of sitting on the couch with Javier Bardem and little Leo saying, ‘this is a movie you can watch that I am in whilst you are under 18’. Leo is going to be proud of his mum anyway, so it will not matter.

Jack is forced to join Blackbeard’s crew aboard the Queen Anne’s Revenge and the race is on to find the Fountain of Youth. Barbossa we find out is only after revenge against Blackbeard for capturing the Black Pearl, his prized possession which has suffered the ignominy of being placed in a bottle as part of Blackbeard’s collection. Barbossa has no intention of supplying the King with what he desires and intends to leave him empty handed.

The fountain’s water must be drunk from two chalices, one of which needs to contain the tear of a mermaid if the drinker is to have extended life. The introduction of mermaids to the film has more than a hint of Rob Marshall’s award winning Chicago and I half expected the mermaids to burst into ‘He Had It Coming’ as they swirl around the hapless sailors terrified and bewitched by their reputation. These fair lassies of the deep swirl and tease their way into the hearts and minds of the sailors, but have been given the twilight treatment and are in possession of vicious fangs to add to their flippers. You have the impression they have far more to offer than just a measly tear to be caught and spilled into the chalice.

In the final scenes, as the cast wrestle with the script and the direction of where they are going, we finally get to see what the Fountain of Youth looks like; more of a trickle actually. I cannot believe that a franchise that spends millions on CGI came up with a dribbling fountain that resembled a bus shelter in Carmarthen in the rain. I was hoping for a Vegas-style spectacular display with water shooting into the night sky with trumpets to set them on their way, all in glorious colour and hinting at a possible new Disney theme park. If this was the best they could come up with, especially as a lot of the filming took place in Hawaii, then it was disappointing. Not that I am an expert on what the Fountain of Youth should look like, but I had higher hopes.

The final scene with Depp and Cruz on a beautiful island has some great dialogue, but there just is not enough to make the film stand out from the crowd. There will be no shivering of your timbers. Perhaps they should quietly bury the franchise on that island, but it makes a lot of money and somehow I do not see that happening. I took along my seven year old son who remarked that the computer game was better and perhaps that was the intention all along. Product placement is the new buried treasure!

Pirates of The Caribbean 4 Official Trailer

A Reflection on Jesus’s Leadership

The Unintended Reformation: How a Religious Revolution Secularized Society