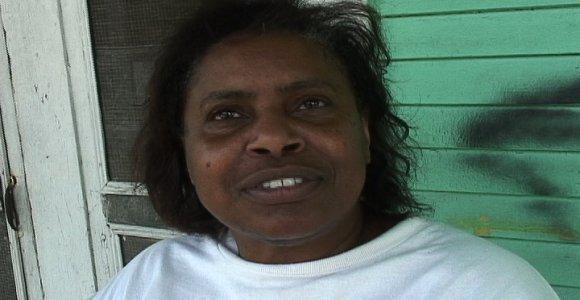 
I’m Carolyn Parker announces the subject of this American, made-for-TV documentary. Those not attracted to documentaries will miss a treat if they stay away for Jonathan Demme, better known for films like The Silence of the Lambs and Philadelphia, has knitted a wonderful portrait of human resilience and courage: the ingredients of a good movie.

The film tells the story of an incredible ‘ordinary’ person – Carolyn Parker – in the aftermath of Hurricane Katrina. The first glimpse of her, caught on Demme’s hand-held camera as he explores the hurricane-devastated Old Lower Ninth Ward of New Orleans, a crime-ridden and materially deprived part of the city, captures her on the veranda of her house. It has been severely battered by the hurricane but remains standing.

He introduces himself from behind the camera and is greeted by the American-Mexican woman who, throughout the filming, is pictured in a white ‘Save the Tiger’ t-shirt. ‘I’m Carolyn Parker’,is her reply: a statement of fact that, spoken directly into the camera, is communicated to all of us watching the film. It sets the scene perfectly and begins what will become a warm relationship, first of all, between Parker and Demme, as he chronicles the matriarch’s struggle to have her home restored, and then with the audience, who are seduced by Parker’s resolute charm and character; by her gorgeously-expressive face and smile.

Demme induces this effect by the way he uses the camera to interact with the subject. He always addresses her, enquiringly, from behind the lens. Not surprisingly then, an intimacy is quickly established and, as the story unfolds, developed through Parker’s willingness to open up her home and share her life. Carolyn Parker is a wonderful storyteller.

The filming of I’m Carolyn Parker took place over a five year period, the length of time it took for Carolyn’s house to be restored. Others might have walked away and many from the neighbourhood had, but Carolyn Parker was determined to stay and build not only her house, which as she explains, is all she has left – most of her possessions were looted in the wake of the hurricane – but to weave together again the fragments of her broken neighbourhood.

Jonathan Demme also stayed, returning faithfully to Old Lower Ninth Ward twenty-one times over the five years to trace the eventual restoration of the family home and also, in the process, to travel further into the life story of Carolyn Parker. One gets the impression that this was not Demme’s intention at the outset but the fruits of an evolving friendship. The end product is a testimony to their fidelity. It’s also an insight into how ordinary heroes – salt of the earth – become what they are. Carolyn adds flavour to whatever and whoever she encounters. She takes whatever life throws at her, wrestles with it and turns it into something better. And she has endured a lot: the murder of her husband, racial discrimination and abuse, near death when a knee operation went wrong. She’s very philosophical about it all and not to be pitied.

This accumulated experience and wisdom as well as her sheer determination, makes Carolyn Parker a natural and gifted community organiser. Barack Obama would have recognised her worth in gold had he stumbled across her in his early years as a community organiser in Chicago. With Carolyn on your side, you know you can change the world... Yes, you can! You also know that get her on your side and you’ll get the whole community behind you.

This is communicated wonderfully by Demme who, first of all, embeds Parker’s personal quest to home-build within the immediate ties of family: daughter Kyrah, son Rahsaan and brother, Raymond, each of whom are impressive in their own right, each with their own stories to tell. He goes on to show how these familial relationships spiral outwards into the community and neighbourhood. As the film unfolds, we’re introduced to an assortment of neighbours and friends. It quickly becomes evident that Carolyn’s house is being restored, not only as a home to live in, but to its previous designation as a hub and meeting place for the neighbourly Old Lower Ninth. This is where friendships are knitted, and life’s ups and downs shared.

One such shared endeavour involves the campaign to save the local church. In their part of town, St David’s has been badly damaged. But, so has the church in the neighbouring part of town. Both churches rely on a single pastoral team, with the same priests saying Masses in both locations. But, due to the extent of the damage and the cost of restoration, only one of the two churches will survive.

Carolyn Parker is at the centre of the campaign to save St David’s. On paper, it makes perfect sense. The church, which gathers mainly black and Hispanic, mostly the poor and unemployed, is always full and is the heart of the community. But the other church, which is mostly white and middle class, is wealthier, in an overall better condition and has powerful friends among its worshippers.

By the time Demme gets his camera to the scene, the argument has already become heated. A priest representing the Diocese is trying to avoid a split in the joint community. He clearly understands the impassioned plea of Carolyn and her friends who describe how they were not made to feel welcome in their sister church because of their skin colour. However, he also knows that he’ll face the wrath of the money-givers if he closes the other church down. The decision to keep St David’s is a brave one, and shows the strength of the campaign organised by Carolyn and her friends.

Towards the end of the film, once Carolyn is installed in her fully restored home and her church, St David’s is operating normally, we’re invited to share the source of Carolyn’s inspiration. Demme and his camera attend Sunday Mass. He films Carolyn, surrounded by members of her family and neighbours, at prayer during Holy Communion. It is the only point in the film where there is no dialogue. Located at a respectful distance, the camera is allowed to run and the lens to speak for itself. It’s an intensely intimate moment.

The Hurley legacy: A personal appreciation