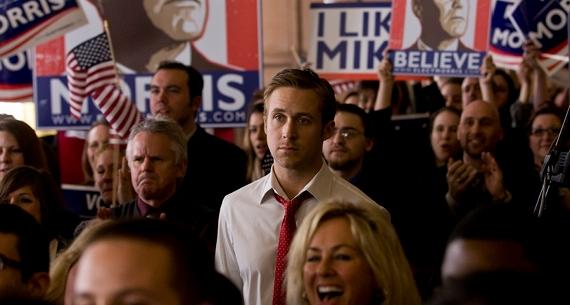 Two Democratic candidates for the Ohio presidential primary fight it out through the gruelling slog of debates, television interviews, and rallies in this absorbing film, directed by and starring George Clooney. A win in this strategic State would propel either candidate into the Presidential nomination stakes. However the film’s story is that of the man behind the man and the entourage of press secretaries and interns, who are ‘married’ to the close knit, caffeine fuelled, frenetic world of the campaign.

Stephen Myers (Ryan Gosling) is a talented Junior Campaign Manager for Governor Mike Morris (George Clooney) during a hard fought Ohio Democratic Primary. This is a crucial state and the chosen candidate is likely to be Presidential candidate. Backstage the interns are living and breathing the campaign. Molly Stearns (Evan Rachel Wood) is one of the interns and daughter of the Democratic National Committee Chairman. Stephen and Molly start a breezy flirtatious exchange which leads to a clandestine sexual relationship.

Stephen’s boss, the Senior Campaign Manager, Paul Zara (Philip Seymour Hoffman) is attempting to win the endorsement of Senator Thompson (Jeffrey Wright) as is the rival campaign manager Tom Duffy (Paul Giamatti). Governor Morris has an idealistic, environmental, pro student, ethical campaign and is initially unswayed when he hears the ‘price’ of Senator Thompson’s endorsement is the position of Secretary of State.

Stephen’s loyalty is tested as Tom Duffy invites him to a meeting and asks him to switch to the rival candidate.

As Stephen and Molly’s liaison continues, Molly confesses that she is pregnant following a predatory sexual encounter with Morris in his hotel in Iowa, and needs money for an abortion. Clearly distressed, she says she is a Catholic and cannot ask her family for the funds. Stephen’s instinct is to protect the Governor at all costs and he withdraws campaign petty cash to finance the abortion. He takes Molly to the clinic and says he will collect her afterwards.

As Molly is in the clinic Stephen is fired for the meeting he had with Tom Duffy. He then angrily offers himself to the Duffy campaign. In an ego deflating, Machiavellian, twist Stephen learns that Tom Duffy, himself, leaked the meeting so that Stephen would be sacked, thereby weakening Morris’ campaign. Duffy calls it a ‘win win situation’. We see the poignant consequences of Stephen’s turmoil as he fails to collect Molly from the clinic. Molly is found dead that evening from a mixture of painkillers and alcohol. Stephen obstructs the investigation by taking Molly’s mobile phone from the room. Molly’s death becomes news and a campaign press conference is held, excruciating in its callous shallowness.

Stephen engineers a confrontation with Governor Morris who he accuses of breaking the golden rule of politics ‘don’t sleep with the interns’! Stephen threatens to expose Morris unless he is rehired and promoted to Campaign Manager. The film ends as it began with Stephen, now Campaign Manager, standing in at Morris’ sound check. But this scene is flat and one dimensional, the depth, like Stephen’s perspective on right and wrong, is lost.

There are consistently fine performances and the great script, fast pace and clever dialogue, will appeal to fans of The West Wing; State of Play and In the Thick of It – although there were no laughs.

The casting is supreme – Philip Seymour Hoffman and Paul Giamatti are perfect as the overweight, wily, campaign veterans in contrast with Evan Rachel Wood as the pert, springy, coffee bearing intern. And in the middle is Ryan Gosling, our fast fading idealist, who is married to the campaign and finds his candidate has feet of clay. His performance is superb; he has the ease of a leading man and a necessary cinematic stillness. In his clever meld of sincerity and artifice Carry Grant comes to mind.

There is no real politics in the film, only power and its corrupting consequences. Oscar nominations are tipped but the film couldn’t be classed as a strong political thriller; neither is it a trivial, political Upstairs Downstairs. It is entertaining and engrossing and the angle on the staff is relatively novel, however The Ides of March falls short of a really great film.

THE IDES OF MARCH - Official Trailer - In Theaters 10/7

In Search of a Midnight Kiss

‘Believe what you read. Teach what you believe. Practise what you teach.’