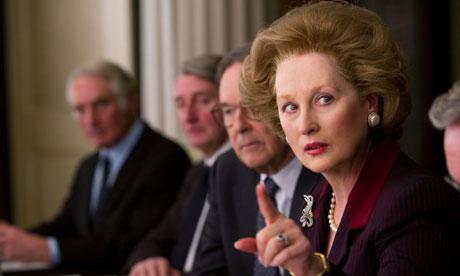 
The single biggest impact of this film has been to bring to wider knowledge the fact that Margaret Thatcher is suffering from some form of dementia. For that significant portion of the population for whom she remains a hero of the order of Churchill, this has been greeted with distaste. Friends of the family claim that they view the film as ‘some left-wing fantasy’. If these are indeed her children’s views, there’s a degree of hypocrisy here, since Carole Thatcher has been quite happy to write at length on the subject of her mother’s decline, in an article for the Daily Mail composed almost entirely of two-sentence paragraphs.

Having seen the film, I can advise readers of this journal that The Iron Lady is very far from socialist propaganda. Not least, this is because Mrs Thatcher’s old age is handled with sensitivity and compassion. At first, this is both powerful and moving. Meryl Streep delivers an extraordinary performance, showing Thatcher either as a frail old lady barged, ignored and unrecognised as she buys a pint of milk in the corner shop, or struggling to remember names, haunted by the hallucinatory presence of her late husband. This is rather challenging for those of us who remember the ’80s and loathed both Thatcher and all she stood for, since we are forced to confront the possibility that she was – and is – a human being, not just some monster.

It’s Streep’s performance, bouncing off Jim Broadbent’s Denis – and a host of other British character actors – that is the centre of this film; and it is Streep and Broadbent who will justify your £7 if you choose to go and see it, because I am afraid the rest of the piece rather misses the target.

The screenplay appears to have been written by someone with only the sketchiest political literacy. As a result, her script doesn’t just start with Thatcher’s later years and her bereavement, it makes this the central focus of the film: the problem with this is that it runs the risk of reducing everything that happened between 1979 and 1990 to nothing more than the background of a middle-class, middle-aged love story.

And in my view, it is simply absurd to produce a film about Thatcher which reduces everything that she did to a portrait of a fifty-year marriage in its last days. The economic and social policies of her government destroyed communities and whole cultures; the inevitable moment of change in the late seventies was seized by her, her advisors and the movement she led, to destroy a consensus about what British society was; in so doing, they released a beast of selfish individualism that is still at large, and which the Blair-Brown era did nothing to defeat.

And in case compassion for the distress and indignities suffered by an old lady leads us to forget what that woman did in her life, it may be helpful if I remind readers of some of Mrs Thatcher’s wackier opinions. Famously, she felt there was no such thing as society, just individuals and families: that wasn’t just a sound-bite, it was the expression of a philosophy that underlay everything her government did. Then there was her attempt at biblical exegesis, when she suggested that the good Samaritan was only capable of being so because he had money. My personal favourite was the assertion that one was a failure if one travelled on a bus beyond the age of thirty. But there is the nasty stuff, as well – things like Section 28 and the changes to immigration regulations. And that’s why we hated her.

Beyond some token scene-setting in which a dozen angry extras bang on the windows of the Thatchers’ car, The Iron Lady just fails to convey or explore this hatred, felt by so many people about her and what she represented. (Another reviewer has called this ‘Thatcher without Thatcherism’). This absence is a dramatic weakness, because the compassion for her ageing would have been much more powerful if the audience had been encouraged to either re-experience, or just acknowledge this historical fact. But it also touches on the political naïveté in the writing: the only political passion discernable in the script is in the representation of Thatcher as a lone woman in a Conservative party of patrician misogynists – and that superficially feminist theme fails to acknowledge the critical, feminist, analysis of her policies in terms of other structures of discrimination and disadvantage. The lack of any politics means that the history is sketchy and sometimes a bit clunky; for example, the complexity of Northern Ireland (in which Thatcher was a key player) is reduced to two bombs and a hasty reference to the hunger-strikers – that sort of thing is just not good enough. The writer here appears to have attempted too much without really understanding enough of it in enough depth to allow her to focus and select material; which is possibly why she chose to spend so many words on her fantasy portrayal of Maggie and Denis’s marriage.

With the directing, part of the problem is perhaps the director’s background in opera. She falls back on a mis-en-scène that looks stagey: there are a number of scenes where groups of men cluster around Thatcher in suits or uniforms, rather as one might have some colourfully-costumed male members of the chorus back-up the diva soprano in one of her big arias.

It seems churlish, but the result is often simply rather camp, as maybe shouldn’t be a surprise from the director of Mamma Mia, and perhaps The Iron Lady would have also been better as a musical. Streep and Broadbent are a magnificent partnership, but Billy Elliot is a better comment on Thatcher’s contribution to British history; and Il Divo a better study of a prime-minister.

What is Marriage? Man and Woman: A Defence

Ukraine: A spiritual journey in a political guise