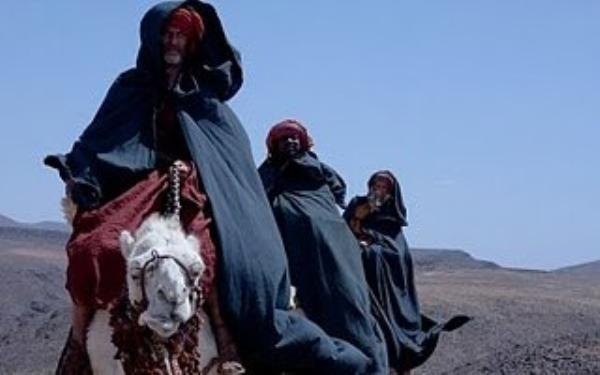 As Mary and Joseph’s testing journey to Bethlehem nears its end in the penultimate episode of BBC One’s The Nativity, the Magi are undertaking their own perilous journey to the same destination. Nathan Koblintz finds much to be admired in the characters and dialogue of these learned figures, and thinks that their wonderings provide a valuable contrast to the very human aspects of Tony Jordan’s take on the story.

This third episode of Tony Jordan’s The Nativity finds the characters caught in the hold-up before a revelation. It is a time of suffering for all of them, from King Herod to the shepherd, Thomas, each racked with waiting for something they hope will bring them release.

Joseph and Mary’s journey to Bethlehem takes them away from Mary’s home, where she faces stones and unfriendly faces eager to pounce on what they see as her betrayal. Here are the familiar enemies of television drama: the spiteful old women, the uncompassionate religious leader, the threat of the all-evil rich oppressors. But the journey also brings Mary more confidently into acceptance of her mission. Joseph’s dream, with which the episode ends, seems like a turning point in their relationship, but it’s still too early for him. Their journey, which has provided the mould within which the flashbacks of their relationship sit, has the ring of human truth to it. Artistically, Jordan has decided to err on the side of ‘believability’, much like the BBC’s take on the Passion; looking at the predominate styles of British film, television and even literature, this is the ‘safest’ option in terms of keeping a non-Christian audience involved. There’s nothing too challenging yet, with a very human Gabriel and Mary’s doubt-filled response to him, apart from the size of the emotions involved – that and the planets.

The trinity of celestial bodies, with which the Magi are concerned, oversee the human stories angling towards one another in Bethlehem. The sweeping shots of space are out of place with the very down-to-earth lives that are portrayed. It’s a purposeful clash, designed to hint at the size and majesty of the forces combining beyond them. It’s actually quite a daring piece of direction that runs the risk of ridicule, with the industrial sound effects and suggestions of science fiction. Since watching this episode the idea of it has grown on me: this is, after all, the God of the cosmos and aeons-old rocks, as much as the God of Mary and Joseph, both caught up in the confusion of Mary’s visitation and waiting for some certainty.

Whereas Mary and Joseph are on what seems to be the equivalent of a long, awkward car journey between two lovers split by hurt, the three Magi are eager, discursive figures. I have a soft spot for these aged academics, whose lives have been spent in the mind, filled with stars and prophesies, growing old whilst others around them throw themselves into the lights of the world. Theirs is a passion abstracted into something that on the outside looks like dryness, an obsession with charts and graphs. They don’t look like heroes, don’t even have the rage of the Thomas the shepherd, sharpening his sword for the revolution he’s fed up of hearing about. But is they whose waiting seems to bear the most grace in this episode. Melchior speaks for them when he says: ‘I could have died in my bed, but having come so close…’ For the Magi, desire is something thin and narrow, a beam of light rather than a wash of colour, but it is the intensity of that beam that has driven them to understand the object of their desire, and then when it appears, to leave all behind them and travel to reach it.

Camped out in the desert they ask each other, ‘What do you believe?’ It’s such a strong question in its simplicity. Their colleagues, left alone in comfort in Babylon, did not believe enough to come with them; and yet out here in the desert, separated from the contentedness of the academic community that has sustained them throughout the years, they come face to face with this: What do you believe? Surely something big, to have come so far from home. But the question demands a clearer answer than this, for there can be little prevarication in the desert and though doubt is always present, a conscious choice of the will must be made. Do the converging planets and star signal a vague ‘bridge’ between Heaven and earth? Is it just the birth of someone important? Or is it the Messiah? Melchior, the oldest, takes the lead. This isn’t just a metaphor, he points out. This is the metaphor made flesh.

What this little interchange captures is the rarest of things on TV or film: an adventure of the mind. Usually the hero’s challenge comes in the form of physical danger and his reward is equally physical in nature; although there is danger facing the Magi, their challenge is mental. The Babylon they have left behind is a place where faith has become coated in a little irony, good humour, sophistication: none of these are bad things in themselves, but alone in the desert the Magi ask themselves if they are ready to leap into the breath-taking world where belief frees itself of these coverings and instead locks directly into the will. Through this, belief can then escape from the intellect’s attempt to tame it and spread its effect through every part of their lives. In this episode we see the intellectual courage of the three Magi as they make the decision to leave doubt behind and act with certainty. Their reward will come in the fourth episode; but remember their colleagues left behind in Babylon, those who refused to answer that question – they remain in comfort and ease, their lives flickering now and again with a little light. Staying in Babylon was a sensible option. Melchior’s question is, of course, a question to us: now that the time for prevarication is done and the time for waiting over, what do you believe?

Nathan Koblintz is a member of the Thinking Faith editorial board.

Episode 3 of The Nativity was broadcast on Wednesday 22 December at 7pm on BBC One.