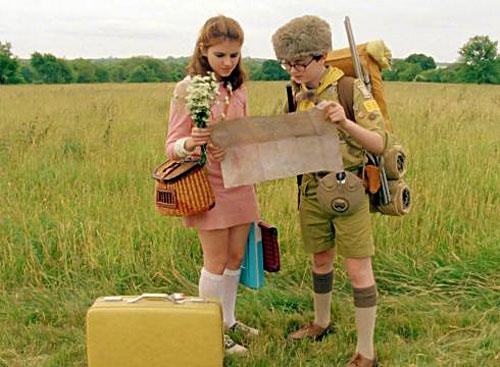 
Wes Anderson’s latest film is an enchanting tale of two pre-adolescents searching for themselves, and a portrayal of the hope and wonder that come from first love. Moonrise Kingdom, set in 1965, tells the story of a pair of young, star-crossed lovers, Sam Shakusky (Jared Gilman) and Suzy Bishop (Kara Hayward), who decide to run away together after meeting in the New England town of New Penzance.

When the two children disappear into the beautiful New England countryside, a local search party is set up, led by the Chief Police Officer, Captain Sharp (Bruce Willis), Scout Master Ward (Edward Norton) and Suzy’s parents, Walt (Bill Murray) and Laura (Frances McDormand). Each character brings their unique baggage of loss, emotional detachment or professional unfulfilment on the chase for the young lovers, and what ensues is a marvellous journey of discovery and fantasy.

Love him or loath him, Anderson’s films do possess a charm and innocence of their own, and all of his trademarks are here. He has the extraordinary ability to turn very successful actors into parodies of themselves and has written a dialogue, in conjunction with Roman Coppola, which is acerbic and charming in equal measure. Yet behind the innocence there is always a reference to the dark side of life and the decisions people have made along the way with which they have struggled to cope.

Every adult in the film shows their weakness and fragility, whereas the strongest characters in the film are the children, who are decisive and confident. Anderson makes us think that the hope offered by youth has a far more powerful drive in human experience than the reflection on failure later in life. All of the adults are portrayed as broken people, whether in their personal life or professional circumstances. What brings them together is their desire to find the lost children.

The two child actors walk a tightrope between childhood innocence and middle-aged recollection of what it meant to be a child, which makes their dialogue and interaction with one another appear quirky, at times clipped, but always enthralling. Anderson and Coppola use humour throughout the film and, as Norton is well-known in the United States as an environmentalist, there is a certain charm in his role as a Scout Leader who wishes his troop to embrace the environment. The relationship between Murray and McDormand’s characters is tired and perfunctory, but their performances are sharp and have resonance. However, it is Willis’ character that attracts the most sympathy: a police officer who has been defeated by life but maintains his dignity through professional status, he sees hope in being able to offer a solution to the young lovers’ dilemma.

Anderson uses colour and music cleverly to craft the distinct atmosphere of the film. We are presented with every shade of yellow possible and Benjamin Britten’s Young Person’s Guide to the Orchestra provides the soundtrack. The use of a doll’s house as an analogy for our lives and the occasionally surreal but witty take on family life prompts the viewer to reflect on the more humorous aspects of their own upbringing, as well as the scars we all bear to remind us of our mistakes.

The story is not Romeo and Juliet; in fact, it has far more in common with Peter Pan and in many ways also resembles Anderson’s previous offering, Fantastic Mr Fox. Its quirkiness and its ability to capture the imagination give us the space to think like children again.

As a young boy who was a member of the Scouts and thoroughly enjoyed the outdoor pursuits of orienteering, craft-making and tent construction, it was drilled into me to ‘Be Prepared’. Although my experiences of scouting bear no resemblance to those of this troop in New England, Moonrise Kingdom still made me think of that motto, because you just don’t know what Anderson, or life, is going to throw at you.