Skip to main content
Photo by Olivander at flickr.com 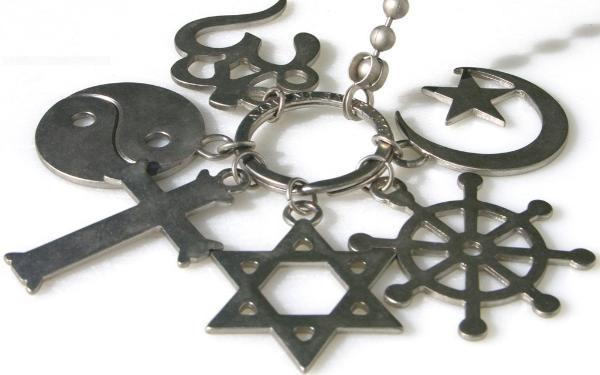 When Pope Benedict met with faith leaders on the second day of his visit, he not only spoke of the shared virtues of all people of faith, but advocated ‘face to face’ engagement as an integral part of dialogue, reports Michael Barnes SJ. What was so striking about the Pope’s affirmation of the need for exchange between faiths, in order that they might counter society’s hostility to religion?

Where has interreligious relations been in the Pope’s visit? At the pastoral end or the political? The answer, of course, is both. A meeting with a representative group of faith leaders may not have the heart-warming informality of time spent with thousands of schoolchildren gathered to celebrate the ‘Big Assembly’. Nor can it compete with the solemn splendour of an address to the great and good of the nation assembled in Westminster Hall and the deep symbolism of ecumenical prayer in Westminster Abbey. The Pope spoke to faith leaders for less than fifteen minutes. Yet in retrospect his few words may turn out to be as momentous as anything he has said in these few days about aggressive secularism or the place of religion in the public sphere.

When Pope Benedict arrived at Holyroodhouse to meet the Queen I was waiting patiently in the queue at the local dentists. It’s a practice run by Panjabis and there in the room was an array of nervous patients, old and young, some turbaned, some veiled, some bare-headed – a small cross-section of multicultural Britain. On the wall a monitor, usually tuned to the pap of daytime TV, was broadcasting the BBC coverage of events in Edinburgh. There was no sound, only the commentary typed up on a strap-line. Suddenly the picture switched to a venerable bearded Sikh. There was a stir in the waiting room, a moment of recognition. The sound was turned up. The interviewer asked what he as a person from another faith made of the visit. A beatific smile unfolded. He was impressed and moved, he said, and – yes – he did feel part of it all.

Meetings with faith leaders are one of the fixed features of papal visits. The speech mirrors the sort of thing which Pope John Paul II used to say regularly on his many international journeys. Thus we got a note of appreciation for the ‘important witness that all of you bear as spiritual men and women living at a time when religious convictions are not always understood or appreciated.’ There was reference to the spiritual journey on which all people of faith are engaged, a quest which – as Pope Benedict told his hearers – ‘Saint Augustine described in these terms: “Lord, you have created us for yourself and our hearts are restless until they rest in you”.’ What we all share as people committed to spiritual values, said the Pope, was the conviction that ‘the initiative lies not with us, but with the Lord’. This is what gives religion its special role in human living. To feel drawn by God does not set religion against other fields of human enquiry; rather it ‘magnifies their importance’, showing how our innate human desire to explore the mysteries of nature serves a ‘higher good’. Religion is about cultivating the virtues of holy living, purifying our hearts and bringing about lives characterised by moral conversion and the pursuit of holiness.

The particular virtues of respect and co-operation between the different religions were duly noted – with reference to the, now traditional, distinction of the dialogues of common life, common action, religious experience and theological exchange. In this context, the Pope acknowledged the many positive initiatives undertaken in the United Kingdom and quoted with approval from the bishops’ teaching document, published a few months back, Meeting God in Friend and Stranger: ‘the effort to reach out in friendship to followers of other religions is becoming a familiar part of the mission of the local Church’. The Church, he said, is committed to dialogue out of a genuine sense of respect and a desire to build bridges of friendship, to heal past wrongs and to foster trust between individuals and communities.

So far so familiar. Yet there is something more in what he said. Referring to the contribution which faith communities together can offer to a society which often marginalises religion, the Pope commended ‘this “side by side” dimension of our cooperation, which complements the “face to face” aspect of our continuing dialogue’. That distinction, between ‘doing’ and ‘being’, originates with the Chief Rabbi who, in a recent book, uses it to speak of the way in which collaborative action can lead to people building up their local communities. For Lord Sacks this is what dialogue is for. The solidarity of ‘side by side’ comes first; ‘face to face’ can follow later. I could not see the Chief Rabbi’s face as he sat in the front row. But no doubt he was nodding approvingly as Pope Benedict quoted his words.

Popes do not often quote rabbis. But this was not just a nod in the direction of a respected British leader. I could not but feel that the Pope was using the distinction in a rather different way from what Sacks intended. For Pope Benedict, quite clearly a man not afraid of the demands of rigorous intellectual debate, the distinction works the other way round. His call to people of faith to bring the virtues of holy living into public life puts ‘face to face’ first. The witness of Christian faith – expressed so powerfully in the motto of the visit, Newman’s ‘heart speaks to heart’ – is first and foremost to God’s call to all people to live a life of virtue and holiness. Get that right, the Pope is saying, and more pragmatic concerns will follow.

Is this to reduce interreligious dialogue to theological exchange? Not at all. Robust debate, not just about the moral values which people of faith share but about the claims to truth which we make, will become more and more necessary if, as the Pope, constantly reiterates, lazy relativising forces are not to become rampant in society at large. But there are many ways of dialogue, of listening for the insistent voice of the God who calls us to rest in him. People of faith share many common values and can do much together to ensure that the religious voice continues to be heard in the public sphere. But the Pope is surely right that we should not be afraid to engage with each other ‘face to face’. It was, after all, the face of the Sikh on the TV screen which stirred the people in that dentist’s surgery. Images do not substitute for words – but they can certainly provoke them. That the Pope speaks not as the leader of the Catholic tribe but as an advocate of a reasoned faith recognisable as much in Southall as in Lambeth Palace may turn out to be the most remarkable result of this most unusual visit.

Michael Barnes SJ lectures in the Theology of Religions at Heythrop College, University of London, and is Director of the De Nobili Dialogue Centre in Southall, west London. He is author of Theology and the Dialogue of Religions(CUP, 2002).

Pope Benedict’s speech to representatives of other religions

The Orphan Scandal: Christian Missionaries and the Rise of the Muslim Brotherhood