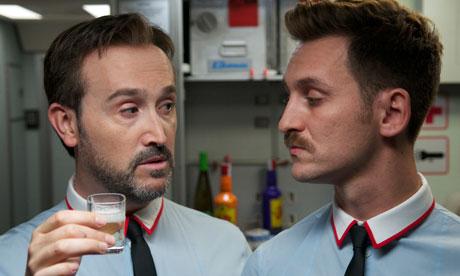 
The wonderfully inventive Spanish director, Pedro Almodóvar, has written and directed a comedy set on a plane with technical difficulties that is circling over La Mancha. This romp in the skies is a cross between a Carry On movie and a bad hallucination on a Ryanair flight. I’m So Excited spares no punches and if you are prepared to embrace it for what it is – a hilarious but somewhat self-indulgent piece of fun – then you will find that this is no economy class movie.

The narrative of the film is simple, centring on the highly questionable professional standards of three endearing, gay air stewards and their relationships with the other cabin crew and passengers. Almodóvar has clearly spent a lot of time on plane journeys thinking about film plots and has admitted that, as a passenger, he tends to be reserved and quiet; his imagination, however, is rampant and unbridled. His obsession with sex permeates this piece, as it does all of his films, although the overall result here is much camper than his other works. Whereas his last film, The Skin I Live In had a very dark side to its humour, this latest work should be taken as a tapas of entertainment and not a serious attempt to inform us about the lifestyle and efficiency of Spanish cabin crews.

Speaking at the opening of the film in London, Almodóvar explained eloquently that the film is a metaphor for modern Spain. In these times of financial crisis and economic despair, Spain is seen as a country circling desperately, trying to find a safe space to land, whilst at the same time having a bit of a party. The passengers, who happen to have careers that arguably have contributed to the economic stalemate in Spain, are oblivious to the chaos going on around them, but at the same time resigned to their fate. The fact that the plane is stacked above La Mancha is a direct reference to Almodóvar’s roots and, when we consider the saga of Spain’s unused airports, the film gains another layer of significance.

Almodóvar seems to be encouraging his home country, even with its economic difficulties, to embrace the lighter side of human nature, and he is inviting all of us to the party. Most of the time this works, but a weakness of the film is the overreliance on the dance routine by the air stewards to the Pointer Sisters’ ‘I’m So Excited’. As funny as it is, it falls into the trap of being such light entertainment that your immediate reaction, as it would be on the plane, is to distract yourself with something else and allow them to get on with it.

Almodóvar was asked how he has managed to have Spain’s finest actors and actresses reappear in his films over the years – Antonio Banderas and Penelope Cruz both have fleeting cameo appearances here, no doubt out of loyalty to Almodóvar rather than because of the film’s artistic merit. He replied that he has dedicated his life to film and to working with people that he cared about. His passion and his ability to get the best out of his actors are commendable, as is his decision to shy away from the Hollywood scene.

This film is not going to please everybody and it will be a brave airline that offers it as part of their onboard entertainment, but before you fold away your tray table and return your chair to its upright morals, sit back and enjoy the ride.