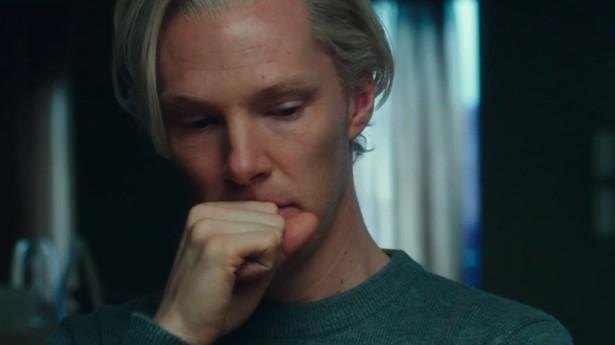 
The Fifth Estate opens with a montage of images to illustrate the development in communication technologies from hieroglyphics and stone tablets to smartphones and tablet computers. Had this sequence depicted advances in weaponry or in human argument (harder to illustrate, granted), it would have been an equally appropriate beginning. For as much as this film addresses Julian Assange’s establishment of the WikiLeaks website as a way to channel information, it also looks at how the release of information can be as aggressive and punishing as a physical attack, and how two people can so often disagree about what is right.

The story we are told has Assange (Benedict Cumberbatch) as its leading man, but has a wide supporting cast of WikiLeaks collaborators and victims. First among these is German technology expert, Daniel Domscheit-Berg (Daniel Brühl), recruited by Assange to assist him as the project outgrows the efforts of just one man. As events progress towards the release in 2010 of over 250,000 US diplomatic cables and of war logs revealing information about the wars in Afghanistan and Iraq, the editorial team at The Guardian oscillate between supporting and challenging Assange’s growing ambition and diminishing sense of responsibility. The American diplomatic staff for whom the fallout of the leaks was career- and life-threatening are represented by members of Hillary Clinton’s staff, played by the always-excellent Laura Linney and Stanley Tucci.

Unsurprisingly, the script being based partly on Domscheit-Berg’s book, the film presents Assange’s German partner as his conscience. If this was not clear enough, it is helpfully pointed out by Berg’s girlfriend: ‘Julian is a mad prophet but he needs boundaries, he needs a line. You are that line.’ This advice comes as Berg becomes more and more disillusioned with Julian, and with the nature and ramifications of the WikiLeaks project. Despite Assange’s claims towards the beginning of the film that whistleblowing is a ‘new form of social justice’, it becomes increasingly apparent that his primary intention is to facilitate the release of as much information as possible. WikiLeaks becomes a quest for technological supremacy and a crusade against secrecy rather than against wrongdoing – the two are not necessarily to be equated. Given the objections raised in the film that many of the leaks placed the safety of intelligence sources in jeopardy, it is interesting and perhaps ironic that Assange questioned the ethics of filmmaking behind this production on the basis of the dangerous situations in which some of his whistleblowers now find themselves.

What I saw in this film was a separation of the campaigner from his professed cause, with broad condemnation of the former but sympathy for the latter. Assange’s concerns that he would be portrayed as something of a ‘cartoon baddy’ will not have been allayed when he saw the film. Cumberbatch does give an exceptional performance, but only within the confines of the script, which is unsympathetic to Assange. The story of his troubled youth was probably intended to provide some balance, but it is conveyed arduously to Daniel soon after they first meet in a conversation which is completely out of character. The overall impression is of a belligerent loner who resents the company and help of others, except when it furthers his very singular aims. The rare moments where he expresses gratitude for anyone or anything could be interpreted as genuine, but would fit equally well into a picture of Assange as calculating and manipulative.

It is the distinction between man and mission, and the decision to place almost equal emphasis on both, that leaves the film hanging in the balance. A straight biopic was probably not advisable at this point in time, given Assange’s unresolved legal difficulties, but might have presented a more interesting and accessible picture of the man. On the other hand, a film about the consequences of WikiLeaks would have been equally sensitive, and is probably better suited to a documentary format; although I do not doubt that several future political thrillers will be at least loosely based on the stories of those affected by the leaks. The film sits on the fence between these two approaches, which ultimately leaves it a little flat. This is not helped by the anticlimax of crucial conversations taking place in chat rooms – when an audience is robbed of the drama of face-to-face confrontation, something is inevitably lost.

When Berg begins to question the sacrifices he is making in order to be part of the WikiLeaks project, his girlfriend suggests: ‘If you’re going to nail yourself to a cross, then you should probably know what it’s made of.’ In doing so, she perhaps suggests an interesting interpretation of the question posed to Christ, who died on natural wood to save ‘natural Man’, by the poet R.S. Thomas:

What bough,
then, will need to be crossed
and what body crucified
upon them for salvation
to be won for the astronauts
venturing in their air-conditioned
capsules?[1]

The Julian Assange of The Fifth Estate might well propose himself and his laptop as the answer to Thomas’s question. It is probably unfair to ascribe to the real Assange a messiah complex, but the filmic character undoubtedly sees himself as the sole guardian of the path to freedom from tyranny.

Thomas goes on to ask: ‘Will artificial living/ give birth to the artificial/ sin?’ If we were to ask ourselves, in light of that thought, what an artificial virtue would look like, ‘transparency’ could be a worthy contender. Insofar as we can be sure that this was at least part of Mr Assange’s purpose, perhaps that thought will help us to evaluate his project in the most generous light.