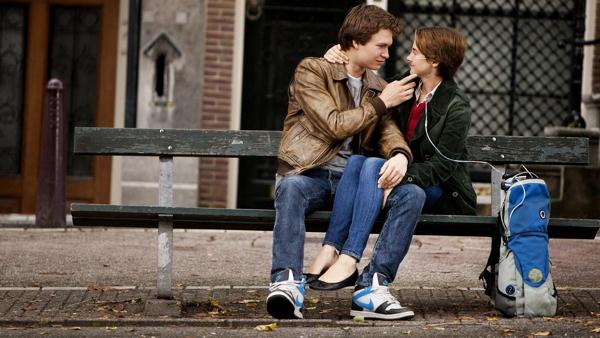 The cancer support group meets in the basement of a local church.  Its emasculated youthgroup-like leader – literally emasculated: his cancer was testicular – begins by rolling out a needlepoint rug of the Sacred Heart of Jesus.  He points to its centre, insists that ‘we are literally here’, and concludes by strumming an acoustic guitar to the well-meaning repetition of ‘Jesus, Jesus, Jesus.’

Hazel Grace (Shailene Woodley) was raised too well to scoff openly.  She is also too honest to hold back her opinion when asked.  So when opportunity arises to respond to Augustus ‘Gus’ Waters (Ansel Elgort) and his line-touting optimism about doing great things and being remembered, she answers with some pointed philosophical vitriol.  Evolutionarily speaking, she insists, if the life of the human race is only a few moments in relation to the infinity of starry space, after which Cleopatra, Mozart and Mohammad Ali will not be remembered, what hope has anyone in this room?

Especially since most of them sitting in the circle are terminally ill.  Hazel, for instance, has been tiptoeing along a precarious biological border since her early teens, only buying enough time to earn some college credits through an enervating experimental drug.  Even Gus, who only attends the group to support a friend with retinoblastoma, has already lost to cancer a leg above the knee and with it his hopes of basketball glory.  The rug, the singing and the sunshiny talk are all just a bit too sentimental for Hazel, but she is kind enough to endure it for the sake of her resolutely upbeat parents.

She even endures Gus’s unapologetic romantic pursuits and allows their friendship to develop despite the fact that she is, in her words, a grenade waiting to go off.  At this point she can love best, she feels, by keeping some distance and protecting the hearts nearest her from the shrapnel.  But Gus is charming – we have liked him ever since he suavely walked into a doorframe after their first conversation – and slowly overcomes Hazel’s reservations by the persistence of his beaming vulnerability.

So, the star-crossed lovers await their fate.  It all may sound a bit mawkish, but, amazingly, it isn’t.  The utterly uncynical affection between these ingénues works an alchemy which may have to be seen to be believed, all the way from the first blushing text message, through their wide-eyed Make-A-Wish adventure to Amsterdam and first taste of champagne, to their damp-eyed date with bitter inevitability.  The emotions on display, for all of their unworldliness, are disarmingly, overpoweringly sincere.  The central performances, by a cast that is refreshingly un-star-studded, are outstanding.  The highest profile on screen (Laura Dern) delivers one of the most tender moments, when, as a mother, she must switch from saying ‘if’ to ‘when’ her daughter dies.  At this moment and others, this reviewer did not need the sniffles all around him to know that tears were welling in the dark.

What is even more impressive is that the film does not sag under its own emotional weight.  A nimble intellect is clearly at work behind a script which has dotted all of its dramatic ‘i’s, and attention to little detail – a Rik Smits jersey, skeleton artwork in the park, an unlit cigarette between the teeth – is never just a tease.  The only loose ends, perhaps, are never quite learning the contours of Hazel’s intellectual agnosticism, and whether her hands are warm or cold.

Even if she expresses some chilling intellectual convictions early on, by film’s end Hazel has certainly undergone a pedagogy of soul.  Cancer is her instructor, and the lessons are hard.  She learns to love fragile persons in a world plagued by cancerous death, to give gently and generously when all seems unfair and harsh, to expose her vulnerable self amidst the workings of a universe pierced by thorns.  If the words ‘sacred heart’ and ‘Jesus’ still do not signify in her world, there is little doubt she knows what they mean.