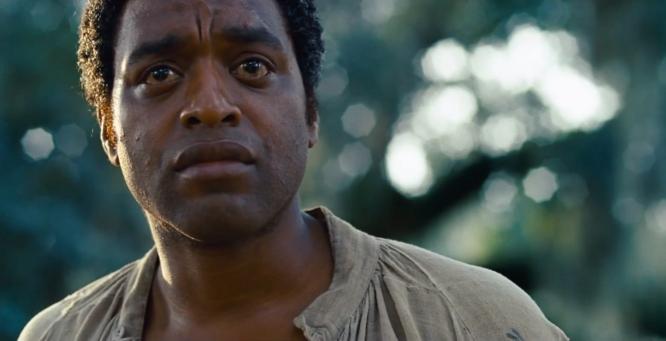 Adapted from the first-hand account of Solomon Northup, 12 Years a Slave is a brutal, unflinching depiction of slavery in 19th century America and a tale of one man’s struggle against the impossible.

The film opens with Solomon (Chiwetel Ejiofor) working in a field of sugarcane before cutting back to a time when he was a free and prosperous man in Saratoga Springs, New York. This stark contrast between his earlier, idyllic life and what remains when it has been taken away is an unsettling opening to the film. After performing one evening with his violin at a travelling circus in Washington DC, having been lured by the prospect of financial gain, Solomon wakes the following morning to find himself in shackles in a brick cell. With no papers to prove he is a free man, and nobody to speak for him, his entire life is denied and discredited. Solomon is shipped down to New Orleans, where he is sold to William Ford (Benedict Cumberbatch).

What is overwhelming in these early scenes is how so savage a system is presented in such civil terms. Solomon and the other slaves are dressed up for auction and perused by the local gentry who act as if they are shopping for a new coat. Paul Giamatti plays the slave trader who intones of one child that, ‘it’s very likely he will grow into a fine beast’, and who declares that his sympathy for a mother being separated from her children, ‘extends the length of a coin’.

During Solomon’s time on Ford’s plantation in New Orleans, some rays of light emerge: the relationship between the two men seems to grow into something beyond master and slave, with Ford gifting Solomon a violin after the latter’s work to improve the transportation of timber down-river. The respite is short-lived, however – in Ford’s absence, Solomon retaliates at the snarling overseer, Tibeats (Paul Dano), and is taken and hanged from a tree with his toes barely touching the ground. All around him life continues as normal, with people coming and going as he struggles to stay upright. This kind of behaviour, the scene seems to say, is normal; this is how powerless a slave was. When Ford returns he cuts Solomon down, but their relationship has changed, Solomon now representing a risk on Ford’s investment that the plantation owner is unwilling to take.

The real villain of the piece enters almost halfway through the film: Edwin Epps (Michael Fassbender). McQueen always brings out the best in Fassbender (this is their third collaboration, following the Bobby Sands hunger strike drama Hunger and 2012’s Shame), and his Epps is a ferocious creation, crackling with menace. Each day he weighs the amount of cotton each of his slaves brings in, beating those who do not meet his standards. A crazed alcoholic, he obsesses over one of the slaves, Patsey (a remarkable debut from Lupita Nyong’o), raping her and then forcing her to pick more cotton than any of the men on the farm. His only feeling for her is lust, but when confronted by his wife (Sarah Paulson), he warns her off setting herself against Patsey, declaring, ‘I will rid myself of you well before I do away with her’.

The violence inflicted by Epps upon his slaves borders on the unwatchable at times, most notably the scene in which Patsey is whipped, her back torn to bloody shreds. While it might be tough viewing, however, it never feels gratuitous, unlike the violence in Quentin Tarantino’s Django Unchained, for example. 12 Years a Slave is a warts-and-all account of slavery; to leave something like this out would discredit it. With the absence of any moralising or a simple theme running through the film, McQueen is saying quite bluntly, ‘this is what happened’.

A search online for films about slavery, particularly slavery in the United States, yielded surprisingly short lists, included in which are titles such as Birth of a Nation and Gone With the Wind. Their depictions of slavery are alarming when viewed at this remove, but what is more shocking is that McQueen’s film is among the first to address such issues head-on (the only other notable example being Jonathan Demme’s 1998 adaptation of Toni Morrison’s Pulitzer Prize-winning Beloved). How is it that 400 years of slavery has had such meagre treatment by the film industry? It has been fascinating to look at the re-emergence of German film over the last twenty years and the willingness to address issues of memory and collective guilt, for example in the magnificent TV series Unsere Mütter, unsere Väter. Will McQueen’s film be the catalyst for a similar movement with regard to slavery in the US? That is the hope, at least; but in a country still grappling with the effects of civil war politics, there could be some way to go yet.

What is crucial is that 12 Years a Slave has, at the very least, reignited a discussion that has been absent from the mainstream media for some time. This alone would be worthy of praise, but McQueen has crafted a masterpiece in the process. His understanding of the dynamics of cinema, and particularly of the power of visuals, is astonishing; Sean Bobbitt’s cinematography is breathtaking at times, drawing beauty from the ugliest of subjects. Ultimately, however, this is Ejiofor’s film, and he deserves every accolade for his nuanced, empathic portrayal of Solomon. This is an urgent, important film and I hope it is the first of many of its kind.