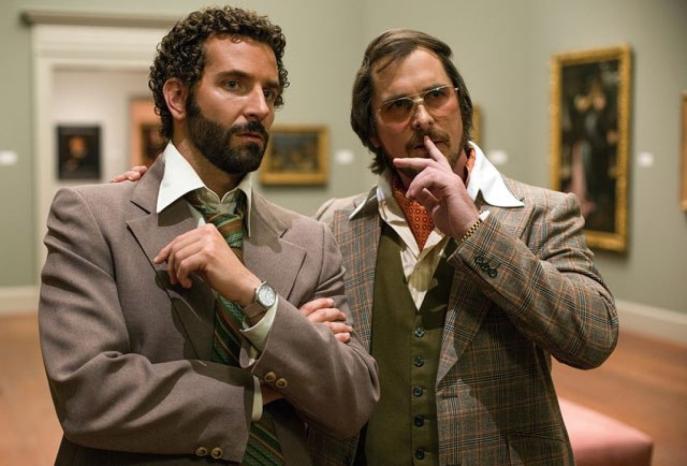 Loosely based on the ‘Abscam’ scandal of the 1970s, American Hustle tells the story of mobsters, murky FBI agents and ambitious con merchants.  ‘Some of this actually happened,’ begins the film; and so we enter the brash, farcical world of the American hustlers. The year is 1978 and it’s flares and cigars at the ready for Irv Rosenfeld (Christian Bale), a Long Island businessman with a toupee problem and a sizeable gut as well as a keen eye for a grift. He and his kindred spirit, Sydney Prosser (Amy Adams), attempt to swindle their way into a life of sequined dresses, expensive art and gold medallions.

But it’s not all that straightforward in the world of the hustle. The FBI have cottoned on to Rosenfeld and Prosser (or ‘Lady Edith’), and have tasked Richie DiMaso (Bradley Cooper), an ambitious, jerry-curled cop, with bringing down the confidence tricksters. But DiMaso has bigger ideas: he wants to put an end to misdeeds on a much larger scale by exposing corrupt politicians, and so he enlists the crooked duo to help him entrap the Mayor of New Jersey, Carmine Polito (Jeremy Renner). The plan is to stage a meeting with a fake sheikh who says he wants to put money into the area. The ‘sheikh’, it turns out, is just a Mexican police agent whose knowledge of the Arab world is passable at best.

Over the course of the film the characters are unable to stick to their original schemes and amongst all the hoodwinking and deceit they struggle to hold it together. DiMaso, although he is married, lusts after Sydney and the sexual tension between the pair is comic in the extreme. Irv’s plans, too, are scuppered by his neurotic wife, Rosalyn (played excellently by Jennifer Lawrence), who foils his plans with the mobsters as well as being thoroughly unimpressed with the new fancy ‘science oven’ he gives her.

Perhaps the film’s success is of no real surprise when you look at the cast; in fact, it’s almost too easy to forget that Robert De Niro pops up as a mobster and Louis CK, one of the best stand-up comedians there is, appears as DiMaso’s boss, Stoddard Thorsen. There is a great recurring joke between DiMaso and Thorsen, whereby Thorsen repeatedly tries to tell an innocent family story about ice fishing in order to impart some family wisdom to the impatient DiMaso, who cuts off his boss at every opportunity. Stoddard’s disappointment at not being able to share his advice and his real sadness at not being respected by this cocksure cop is on the tragic side of funny.

Director David O. Russell has worked with many of the cast before and this is apparent in the chemistry between the characters. The difficult male anti-friendship between Bale and Cooper’s characters is staged well, as their insecurities and jealousy of one another often spill over into comic pettiness. DiMaso knocks off Rosenfeld’s toupee at the start, demonstrating that our two lead characters are still employing schoolboy games in an adult world of crime and deception.

But, whilst the whole charade is somewhat absurd, the cold reality of the whole debacle does at times touch the characters; there is a real sense of self-pity and pain amongst them. Rosenfeld is not immune to a visit from his conscience when he realises that the mayor is of the same, hardworking stock that Rosenfeld comes from. Things are not as black-and-white as he thought them to be. Lawrence’s tragic housewife is ultimately doomed: she enjoys all the trappings that the life of crime gives to her yet she cannot live in the real world, her relationships are warped by the situation she has landed in.

By the end of the film it is hard to know who you want to walk off into the sunset and hold up a victory cigar. By creating characters who are moral enigmas, David O. Russell has made it hard to tell who has swindled whom and who has emerged victorious in the stylish yet murky world of the hustle.