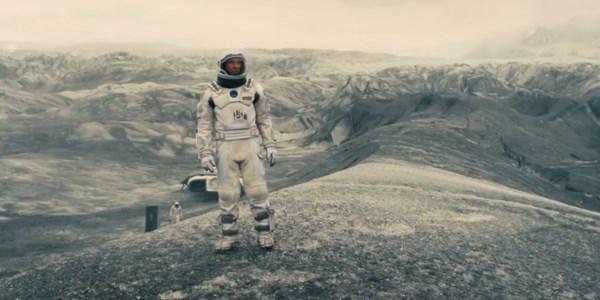 A film comes along every once in a while that is an ‘event’ rather than a pure motion picture. London-born director Christopher Nolan has enjoyed such a rich vein of form with the large-scale, cerebral blockbusters (The Dark Knight, The Dark Knight Rises, Inception) that he has directed recently, that each new film of his is treated as such an event, shrouded in secrecy and greeted with great excitement. Interstellar is no different.

The film presents a post-technology-obsessed West in which the appeal of the advancements and digital trickery that we now take for granted has subsided. Technology has turned from the answer to all human problems (including boredom) to a mere waste of crumbling and fading resources.

Food has run short and all crops except corn are failing. All the slick technology in the universe cannot save the human race, 6 billion of whom have been wiped out after a worldwide famine. It is against this backdrop that we are introduced to Cooper (Matthew McConaughey), one of the last remaining apostles of hard-fact science.

Cooper is struggling to hold together his fractured family in the midst of natural disasters and scarce food. He is angered by his wife’s death and the utter contempt with which most people treat his gospel of objective, technical knowledge. Cooper’s problem, as outlined by his father-in-law (a nicely bedraggled John Lithgow), is that he was born ‘either 40 years late, or 40 years too early’. The world no longer needs engineers, but farmers; it needs hands-on work, not theoretical physics. To his chagrin, Cooper is part of the ‘caretaker generation’, whose main focus is to ensure that rationing and conservative living will allow the next generation to build on a solid foundation.

And yet, his daughter Murph shows enough interest in science to keep Cooper on his toes. It is her discoveries that push Cooper to his meeting with fate: uncovering the top-secret Lazarus project from NASA, which is aiming to find new worlds where humans might be able to settle and begin anew. Cooper is adamant that ‘humans were born on Earth, but we weren’t meant to die there’. It is this sense of adventure that propels him into space with Anne Hathaway’s character, Brand, on an immensely dangerous voyage fuelled by necessity and hope.

There are far too many potential spoilers to reveal any more detail here – suffice to say, Nolan has packed out the film with moments of intense peril, humane beats of grounded emotion and jaw-dropping special effects. Its pounding soundtrack and rousing audio design rattle the viewer, especially during IMAX performances, which is the format for which this film was designed.

This is a visually daring work of scientific evangelisation. That is not to say, though, that there is no heart or emotion at the centre of this near-three-hour epic. Indeed, Christopher and Jonathan Nolan’s script seems to go out of its way to proselytise the tangibly scientific merits of Love. Interstellar therefore resembles what might have come about had last year’s space drama Gravity been rewritten by Teilhard de Chardin.

If the very thought of that sounds exciting, this film will definitely entertain you. However, you will likely be left as most audiences have been: slightly overwhelmed and perhaps even a little confused. There is maybe too much theoretical physics here, sandwiched between intense family melodramas. The large dollops of astronomy threaten to swallow up the more intimate moments of the film; and the production runs off in the final act into new dimensions for filmmaking (quite literally).

If there is an interesting question posed by Interstellar, it is about the possible place of emotion or vulnerability in objective reasoning. However, one cannot help but feel slightly overfed by the end, as if Nolan was trying to pack too many theories and hypotheses into a single film. This is, without doubt, an impressive and commanding piece of work, but it is weighed down by an always-ambitious director attempting to cram just a bit too much into his latest opus.

The Sense of an Ending