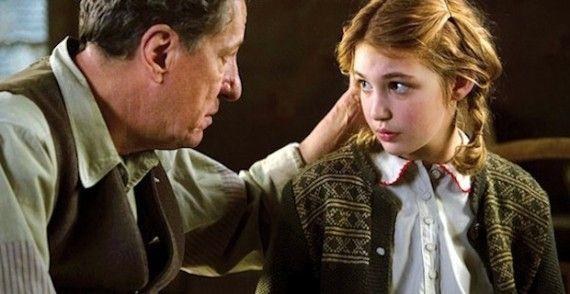 This film might be as gentle an introduction as there is, particularly for children, to the phenomenon of war.  Set among school children in Nazi Germany, The Book Thief does not depict the fighting of the Second World War but its social cost.  In the terms of the film, war is about two meals a day rather than three, dads who leave for a while but tend to come back - even if carrying a cane and a bit harder of hearing - and Jews and Communists, whoever they are, simply getting ‘taken away’.  All the ammunition in the story echoes off the walls of the nursery, as it were, and its pillows and padded corners absorb most of the shock.

But not all of it.  Because lovely people in this world die; pretty much everyone, in fact, that the orphaned Liesel (Sophie Nélisse) grows close to in her domesticated adventures.  Death might even be called the movie’s main character.  It is his voice we hear in the opening voiceover.  It is he who is given the final word.  And as much as we might like to focus our sympathy on the victimised yet clear-eyed youth, it is not she we are really being introduced to in the film’s opening sequence:  when her brother suddenly succumbs to an illness, it is really Death we meet.  Mildly affable and gently ironic, he is our only constant companion through the course of the tale.

This may account for why the film does not emotionally satisfy.  No one can really empathise with death, however bashfully or grandpaternally portrayed.  For one, he is essentially an abstraction:  viewers might as well be asked to identify with a personified triangularity, for example.  Secondly, what he represents is irreducibly abhorrent:  if death really means the end of everything I love, as it would seem to in this film, what could be more dreadful?

It may be, instead, that the film is not so much trying to snuggle up with Death as to provide some cheer in the teeth of it.  Little Liesel’s narrative is dotted throughout, perhaps a bit self-consciously, with hints about the power and promise of story.  As she learns to read, to write about the world in her own words and ultimately to tell a good story - is one of the books in her later-life swish Manhattan apartment the record of this very tale? - the implication is that story may be the best way to preserve the memory of those we love and push back against the encroachments of death, destruction and the dark.  But if this is the message, it either isn’t fully conveyed or doesn’t quite ring true.

Nonetheless there are one or two memorable moments: Liesel piping up bravely with a story from the corner of the basement where all her neighbours crouch during an air raid; her adopted father (Geoffrey Rush) similarly playing his accordion in order to while away the hours and the fear.  But most beautifully of all, a Jew hidden for years clandestinely stealing that very moment to walk the streets unseen, daring the peril of the skies to stand in amazement and thank God ‘for the stars that blessed his eyes’.

Visually, the film is a finely crafted period piece.  The photography is pleasing, and its many slow pans and lingering shots reinforce the idea of story as the preserve of memory or a place of refuge.  The acting is uniformly strong, even astonishingly so by the child actors.  But the parts do not really add up to a whole, and one walks away feeling that the important bit must have happened off-screen.

Which is why, as already remarked, it might make a suitable introduction to themes of war for those too tender for the topic.  But even then, there may be a better way.  The Book Thief is adapted from a book, and although I have not read it, the very fact that it has been translated to the screen suggests some kind of literary success.  Hence, if you are really in the business of introducing your child to some of the harder lessons of life, in addition to the trials of loss, social collapse and general deprivation, why not add one more?  Give a miss to two more hours at the cinema, and introduce some old-fashioned training in the harder - and almost certainly more memorable - pleasures of reading.

Scott Pilgrim vs. the World

A Ray of that Truth which Enlightens All People