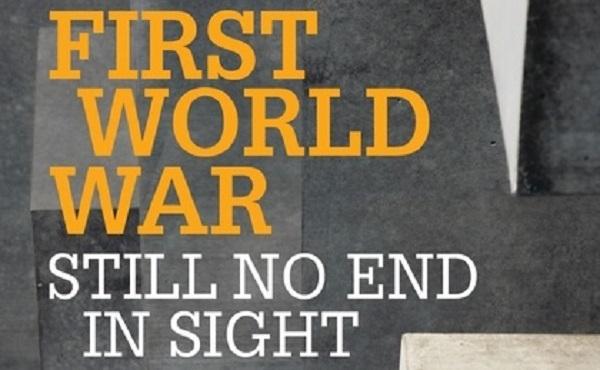 I don’t know how you like your wars but I prefer mine over. The sociologist Frank Furedi has written an absorbing and insightful book to mark the centenary of the outbreak of the Great War in which he argues that in crucially important ways, that war is still not quite so. It’s a thought that is fundamentally at odds with how we have come to think about it. Eric Hobsbawm, for example, posited the ‘short twentieth century’ as lasting from 1914-1991; for him, the conflict which engulfed almost the whole world in 1914 came to a close, to all intents and purposes, with the end of the Soviet Empire. It’s a plausible thesis but one which raises the question: which phase of history have we been embarked on for the last 25 years? The answer is still not obvious, at least once you dismiss the easy answers like the ‘clash of civilisations’...

The thought which enables Furedi to read contemporary western culture as still ensconced in the dynamics which gave birth to the First World War is that the conflict which took explicitly armed form in, as Hobsbawm would agree, the two World Wars and the Cold War, is now being worked out in what we have come to know as the Culture Wars of the early twenty first century. At first that is highly counter-intuitive. Most westerners, at least those outside the United States, might wonder exactly what one was referring to by the term ‘culture wars’. It’s a bit of jargon used by cultural commentators and the politically savvy, not the average citizen. Yet, the phenomenon to which the term refers would be immediately recognisable: the politicisation of culture (what we eat, whom we sleep with, what we believe, how we dress…) as a substitute for genuinely political debate.

The point of departure for Furedi’s analysis of the course of history over the last century or so is not entirely original but is a fact less discussed than it ought to be: that by the end of the nineteenth century Europe had seen the opening up of a huge chasm in its self-understanding, the eruption of an anomie and of a sense of the meaninglessness of human existence which cut through the living tissue of the established way of life, with its spirit of deference, commitment to patriotism and the nation state, and all the rest of what we think of as characterising the era of Victorian values. This explains why the outbreak of the Great War was not, pace Downton Abbey, greeted with foreboding and regret but with rapturous acclaim: at long last there was something meaningful to live for, a war which would vindicate true values and purge Europe of its listlessness.

It was not to be like that. Instead, the bitterness of the war experience plunged the West into an even deeper despair: if the great enterprise of war could not provoke the catharsis the culture so craved, what could? In Furedi’s narrative, the next phase of the crisis was the pursuit of ideological solutions to the problem, leading to a variety of projects which shared the conviction that the state was the appropriate agent to deal with the civilizational crisis. This was the result of the curiously paradoxical legacy of the Great War: the inevitable democratic surge which accompanied the end of the Europe’s aristocratic and imperial societies was matched by deep-seated fear of the violence of which the masses seemed to be capable. It’s a tension that is still very much with us. It gave birth to the utopian economic project of communism, the racial nightmare of Fascism and Nazism as well as the interventionist liberalism of the post-Second World War West.

Liberalism, of course, is the victor in this protracted ideological warfare. The Second World War destroyed the credibility of the Right, the Cold War definitively subverted the Left, leaving the floor to that melange of liberal, capitalist and democratic ideas and practices which is the nearest there has ever been to a unified global polity.  But it’s an odd victory. Furedi points out repeatedly that western thinkers have been singularly coy about arguing for these things as worthy life projects. Capitalism may, by default, have emerged as the best way of distributing goods but its manifold inadequacies make it all but impossible to justify as a moral project and so our intellectuals have not even tried to do so. All the efforts to tame it by regulation and courses in business ethics look rather paltry in comparison to the tsunami of mobile capital which swamps the international markets every day.  Meanwhile, ‘liberal’, though being an accurate epithet to apply to our societies, has become almost universally a term of abuse; no-one, Furedi asserts, is prepared to take on the identity of a ‘neo-liberal’.

So the existential crisis of early twenty-first century human beings is, by and large, the same as that which our ancestors underwent a century and more ago: disenchantment, alienation, dissatisfaction. Which is quite a sobering thought and one which experience bears out. Moreover, we have returned to the suspicion which took our forebears so cheerily into battle, that the best way to resolve the crisis is by dealing with questions not of ideology but of lifestyle. The difference is that in 1914 there was rather a clear world view which everyone shared, even if it was on the way out. Nowadays, fragmentation and pluralism are the norm. Some of us might fret about the need to define a ‘sense of Britishness’, for example, but the fact is that no-one has been able to do it without sounding ludicrous.

What is refreshing about Furedi’s thesis is the author’s aspiration to stand above the fray of the conflict which defines our era, to identify and analyse it, rather than falling into the stale polemics which seem at times to be tearing us apart. So this is not a nostalgic call for restoration of some lost world. But nor is it a clarion call for a more ‘progressive’ solution, not at least of the sort of progressive solutions which are to hand. Furedi is a member of a group of post-Marxist intellectuals who have made a name for themselves for standing apart from the great ‘progressive’ courses of the day (the Green movement, the war on religion, ‘equal marriage’, the increasing intervention by the state in the rearing of children…) and whose somewhat contrary views are aired on the website Spiked, the controversial online journal which succeeded Living Marxism and which focuses on the values of humanism and freedom. It’s a bracingly unfashionable perspective which affords religious believers a valuable vantage point. Because, not being quite as politically cunning as the children of the world, we easily get carried away in whichever cultural currents are most powerful in the bit of the world we happen to occupy. A look at how the culture wars have disfigured the Catholic Church in the English-speaking world, entrenching an ostensible divide between progressives and restorationists, easily confirms that. (It’s an opposition which makes Pope Francis, for one, quite impossible to understand.) It helps to stand back from all the name-calling and ask ‘who programmed me to think like this?’ Whether one can truly sustain or even achieve for a moment the ‘view from above’ which Furedi offers us is, I grant, a moot point. But historical reflection certainly yields a sufficient sense of the otherness of the past to help us overcome the worst of our parochialism, and to alleviate the narrowness of our immersion in the nitty-gritty of today.

If there is a nugget to hold on to here it is not entirely novel: that we live in a disenchanted world which leaves us feeling dissatisfied; that we live by a political and economic system which we cannot justify and hence are susceptible to finding ourselves plunging into self-loathing; and that an immense amount of blood has been spilt over the course of the last century in various attempts to extricate ourselves from the mess, all without notable success. Some will find this a grim conclusion but just because it is uncomfortable does not make it untrue. For religious people, it’s a truth that should be somewhat easier to bear. Believers, on the whole, think that they have found reasons for living, even in a society which cannot articulate to itself its raison d’être. The Catholic Church gives its qualified blessing to democracy, capitalism and liberalism and offers her daughters and sons the resources necessary to make participation in this way of life meaningful and rich. But lest we be tempted to triumphalism, let’s not forget the fragility of any religious hold on a ‘solution’. As a reminder, here is a quotation from a speech given in 1915. Who do you think is speaking?

Shocking as it may seem, this bloodthirsty encomium is an Anglican sermon given by Arthur F. Winnington-Ingram, the then Bishop of London. It’s not so very different in tone and chilling content to what we have become accustomed to hear emanating from the mouths of today’s Islamo-fascists. It’s hard to believe it comes from the same religious identity which nowadays likes to represent itself in the studied harmlessness of Rev. There is much to ponder there about western civilisation, the nature of both Islam and Christianity, the relationship of religion and violence, and the rapid transformation of religious identity. But the most glaringly apparent item to note is how  religion can so easily find itself sucked into the vortex of cultural currents, commandeered to serve this or that secular project, even in cases where the project in question is so squarely hostile to the essence of the religious message. Invoking a religious way out of our civilisation’s quagmire is not something to be done glibly. To live the crisis in the Spirit will, of course, bring healing and grace to bear but faith is no mere solution to human problems.

Interesting as this book is, and as heartily as I would commend it to the reader, it is far from perfect. The number of typos and the extent of needless repetition make one wonder about the quality of the editing. There are passages where I hoped for a fuller and richer treatment of a topic which, I suspect, would have been accomplished by this writer with relative ease: the emergence of the ideology of neo-conservatism is patchily delineated and there is no mention at all of the transformation of human lives from 1990 onwards by technology, surely a significant factor in our distraction from the big questions which, Furedi contends, linger on beneath the surface of our unquiet societies. Religion is almost entirely absent too; had the book come out fifteen years ago that would have been understandable but in 2014 it seems odd, not least given that one of the most voluble sources of this kind of criticism of western culture (decadent, materialistic, amoral etc.) comes from its younger Muslim citizens. But there is still plenty here to stimulate thought and give a fresh perspective on the question of how to communicate the Gospel to a culture in permanent crisis.

Damian Howard SJ is a member of the Thinking Faith Editorial Board.