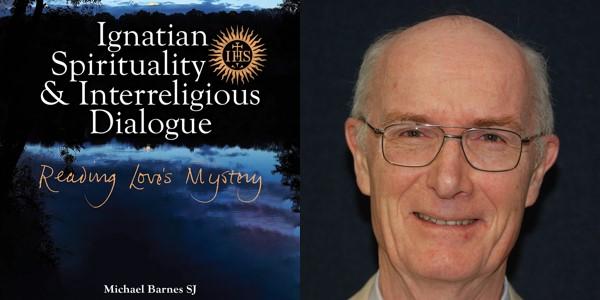 When I was asked to write some reflections on Professor Michael Barnes’ new book, I was both excited and challenged. The Ignatian Spirituality context felt familiar enough, but the intricacy of the interweaving faith traditions presented often new and stimulating reading.

The author is a Jesuit priest, who taught at Heythrop College in the University of London, was Director of Westminster Interfaith, and also founded and coordinated the De Nobili Centre for Dialogue in Southall. He introduces this book as a way of reflecting on and offering insights from forty years of teaching and lived experience among a kaleidoscope of faith communities both locally and internationally. Underlying the whole book is the author’s own commitment to the Ignatian presupposition that truth, in God’s own unique forms, will appear through the generous and patient work of mutual and respectful listening and sharing. As the title suggests, ‘reading’ the people and lived experience of other traditions is to be open to the mystery of love waiting to be revealed there.

I read this book twice. On the first reading I resonated with and was touched by the sheer respect and humanity of the author’s encounters with people in villages in India and in the vibrant communities of Southall in West London. A charming miniature expressed the author’s attention to the surprise of detail: when he asked about an early morning clattering of bells at a small roadside temple in India, he was told: ‘They are waking up the god.’ Such moments abound throughout the book like memorable gems, and give a tone of friendship and familiarity to all it contains. The same affection and respect was shown in his understanding of well-known figures like Francis Xavier, Robert de Nobili and Matteo Ricci, all respected for their different approaches to mission and inculturation. Particularly moving was the account of the wonderful English Jesuit Thomas Stephens, whose immense work of ‘translating’ or making accessible his Christian faith, in the context of 16th century Goa, was done through his own epic Marathi poem, the Kristapurana. Just as touching were the accounts of the many friends who gathered in St Anselm’s parish and De Nobili House in Southall, and dispersed as pilgrims of friendship, listening, welcoming and being welcomed throughout the network of local faith centres in West London and beyond.

Easy to understand were some of the strikingly symbolic icons, like the Chattri on the South Downs a memorial to Indian soldiers killed in the First World War. Many were hospitalised in Brighton, and particularly remembered are those Hindus and Sikhs whose lives were honoured as they ‘passed through the fire’ at this funeral shrine. There is an unforgettable description of the author’s witnessing the beautiful and intricate creation of a Buddhist sand mandala, and the sudden moment of its being swept back into its original dust to be poured into the river Thames: a striking ritual of re-consecration without clinging or possessiveness. Small accounts that became lifetime memories, such as the unexpected blessing of a dying woman in a small village in India, are moments that neither the author nor the reader will easily forget. One of the most memorable figures of inter-faith friendship was the prophetic Brother Daniel Favre, a revered figure in the long work of building trust in faith among so many London communities; and for the author, a teacher, mentor and friend. This book really is a personal reflection on the author’s own life and commitment to the mission of transformative listening to the ‘others’ of many faith traditions.

There is a significant triple focus at the beginning and end of the book with linked reflections on three Francises: Francis Xavier, Francis of Assisi and Pope Francis, each with a different and particular gift to share about the work of respecting and listening to people of other traditions. But the figure who emerges with greatest respect is the one who implicitly gave his name to the main title of the book, imaginatively but powerfully pictured in a statue in the basilica of the Bom Jesus in Goa: St Ignatius, with the name of Jesus indelibly stamped on his heart.

And so to the second reading of the book: I began to see more clearly the weaving together of the author’s knowledge, personal experience and deep respect for Ignatian Spirituality – and how this lens of ‘finding God in all things’ has enabled him to see, or better ‘read’, the people, experience, traditions, texts and variety of religious practice. He speaks of it being a form of lectio divina… not just of the sacred texts of other traditions, but of the living experience of the faith communities they represent. He describes well his long commitment to comparative theology, in which ‘“text” is to be understood as anything that can be read, not just scripture or commentary but the context or the texture of things, whatever gives shape energy and substance to a religious world.’

And the book certainly is filled with energy and texture: a sense of the inner depth and outlooks of Christian, Hindu, Sikh, Buddhist, Islam and Jain traditions and their communities with whom the author has felt so much at home. At a recent conference he described a practice for himself of not using the ending - ‘ism’ but rather speaking about people of Hindu or Sikh faith, Buddhist belief or the faith of Islam. Much of the inter-faith dialogue described was not done only in academic settings but in the encounters and conversations with people in the midst of life in busy urban environments: ‘in the middle of things’ or, as one of the chapters is entitled, ‘Dialogue in the Dust’.

Many of the Ignatian principles that are woven into the process of the Spiritual Exercises emerge as being helpful, even essential ground rules for living an attitude of respect and dialogue: the Ignatian ‘Presupposition’, the openness and generosity of Annotation Five, and the encouragement to ‘compose’ oneself both in the imagination and reality. Throughout the book there is a sense of commitment to the principles of discernment: sensing what can build trust and the surprise of new openness, and equally what disintegrates or closes down the commitment to real conversation. He describes discernment on the pilgrim journey together as, ‘a virtuous activity that springs from the humility of ignorance’.

Two key themes are pilgrimage and hospitality, essential elements of the way of true dialogue. Themes of the memories contained in celebration, art, architecture, poetry and language are offered as opportunities to sense resonance among what at first sight may seem very different traditions. A significant point was the placing together of Ignatian indifference and Buddhist equanimity when writing about the Buddhist Middle Way. Mindfulness and meditation are reflected on with fascinating questions about their underlying principles.

Important questions emerge about Christology and the threefold ways of describing ‘other’ faith traditions through ‘exclusivism, inclusivism and plurality’. The author suggests a vision of plurality that defies neat definition and challenges us to expand and open up ever more serious reflection on our own and others’ beliefs. It is a compliment to the author that he leaves us with such huge areas to explore, yet a confidence that this can be done in generous, listening friendship with others. The very process of dialogue becomes revelatory in itself.

The care with which the author shares his years of teaching and long study made a second reading stimulating and challenging… helped a good deal by the glossary of terms at the end of the book! Although it includes some fascinating and precise academic strands about the details of different traditions, these fruits of his years of research come across as a record of the author’s love, not just for a subject, but even more for all those who populate it. Above all it is a record that brings together two important strands: a personal lived experience of Ignatian Spirituality, which has enabled the author to discover and ‘Read Love’s Mystery’ in the friendships and treasures of many religious traditions.