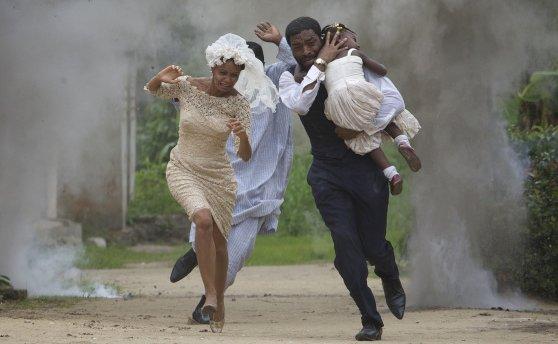 An adaptation of Chimamanda Ngozi Adichie’s award-winning novel, Half of a Yellow Sun follows the lives of twin sisters Olanna and Kainene during the relatively short-lived but bloody Biafran War (1967-1970).

Olanna and Kainene begin the film as young women about to embark on their careers in 1960s Nigeria. We follow them as they fall in love – Olanna with Odenigbo, an idealistic professor; Kainene with Richard, a British writer – and as they live through the war and its aftermath.

Adichie’s book is rich, its multiple plots filled with flawed characters and powerful imagery. It was always going to be difficult to portray all of this in less than two hours and Biyi Bandele, as both scriptwriter and director, has had to make some sacrifices to keep the film on track and within budget.

In the Q&A following the film’s first UK screening, Bandele explained that his main focus was to make sure that the essence of the novel was portrayed in the film, and in this he has been successful. The novel’s real love for Nigeria and for its characters is reflected in the film, with added touches of humour that work well.

It was great to see that rarely-discussed issues, such as the dichotomy between tribalism and nationalism, are highlighted in the film. However, the horrors of the war – violence, forced conscription, starvation and displacement of refugees – are touched upon only briefly, whereas they are more prominent in the book. Some of the complexities of the novel’s characters are also missing, which sometimes makes it difficult to understand the meaning behind their actions at key points in the plot.

It is a shame that the character of Ugwu, one of the most interesting characters in the novel and arguably Half of a Yellow Sun’s real narrator, is condensed into little more than a foil to Odenigbo’s mother. He provides many of the film’s lighter moments; his darker and more complicated story from the novel does not make it into the film. Actor John Boyega, whose debut in cult classic Attack the Block marked him as one to watch, was a little under-used.

Bandele said that casting the roles was one of the hardest parts of making this film, but he can rest assured that he made the right choices. Boyega is part of a brilliant cast, with Thandie Newton, Anika Noni Rose, Joseph Mawle and man-of-the-moment Chiwetel Ejiofor assuming the main roles with passion and skill. Newton in particular stood out in the film’s quieter moments, portraying Olanna’s inner turmoil with great control.

Nigeria is beautifully shot throughout the film and Bandele portrays wealthy West African life perfectly. He also clearly takes care to get the period details right: the film highlights subtly the sisters’ hairstyles and how they change as the war progresses, reflecting the attention that Adichie pays to this in the book.

The real highlight of the screening and subsequent Q&A was finding out what Adichie herself thought of the film and how she was involved in bringing it to the screen. She explained that she chose first-time director Bandele for the adaptation because of his passion for Nigeria, and she loved the film. Adapting this story for cinema audiences has clearly been a labour of love for the director and cast, many of whom contracted typhoid or malaria while making the film.

Despite the time and budget restrictions, Half of a Yellow Sun conveys the essence of the novel and helps to shine a light on a little-known period in West African history. I hope that it drives more people to read the book and find out more.