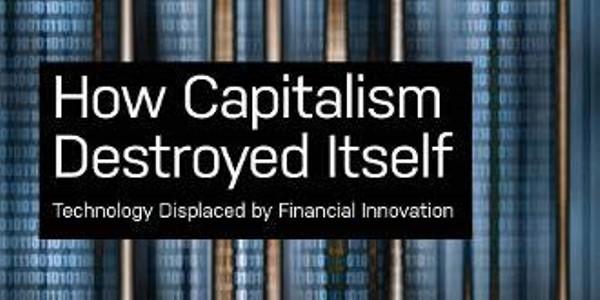 Capitalism has many critics today. Blame for the 2008 crisis is laid at capitalism’s door; the current pandemic was made possible by the impact of globalisation, one of capitalism’s favourite children; the vote for Brexit and the election of Donald Trump in 2016 along with the rise of chauvinistic nationalism are accredited to the frustrations of the victims of globalised capitalism; the widening inequalities in the world are seen as fruits of capitalism; and environmental crises are attributed to the depredations of capitalism. There is some nuance in the many condemnations, with qualifiers such as ‘casino’ and ‘finance’ capitalism, but the general tone of the discussion is negative and critical.

It is interesting, therefore, to read a book that does not deny the problems listed above but takes a more differentiated view. As the title suggests, many of the problems currently encountered can be due to a self-destructive dynamic in capitalism that could have been countered by political and legislative action. Democratic politicians and their constituents have unleashed those destructive forces. For those critics, such as the author, William Kingston, who value the contribution that capitalism has made, it is saddening to see its disintegration.

The argument of this book is clear, persuasive and frightening. The premises and steps of the argument are as follows.

1. Capitalism has been hugely significant in the generation of wealth that has allowed many millions of people to live decent lives for longer than they might otherwise have done.

4. But propertied interests have succeeded in capturing the law-making powers of government and have freed property from the constraints obliging it to serve the public good.

5. This law-making power has been used to extend to the generators and holders of money the same rights accorded the holders and generators of other commodities.

6. Consequently, the investment in technological innovation which might have saved capitalism has instead been diverted to financial innovation.

7. The consequences of these changes are growing inequality, the crises of the banking and credit systems, austerity politics, and the popular revolt of voters and taxpayers against this oppressive regime.

The conclusion drawn is that our democratic regimes are caught in a bind from which there seems to be no escape. They are in hock to the financial interests that fund parties and candidates, and at the same time they depend on popular support that they attempt to purchase with the promise of transfers in benefits and welfare payments.

Kingston, as Emeritus Professor of Innovation at Trinity College, Dublin, focuses on the innovations that enabled the emergence and development of capitalism. He highlights structural changes that have transformed government’s role to protecting the interests of those already benefitting from the existing generation and distribution of wealth, but block the sources of innovation that could deliver solutions and further development for the benefit of all. The analysis is not a purely economic one, but sees the roles of culture, ideas and politics as intrinsically linked with the economic.

Legal protection of property was fundamental for the development of capitalism, but the legal regime also imposed constraints that required property to function for the public good. Innovative products brought to market could succeed in generating profits for their producers only on condition that they delivered benefits to consumers who therefore chose those products in preference to alternatives. Technological innovation was the key to capitalistic success. The public good benefited as long as producers were obliged by law to compete; monopolies were discouraged. The relevant constraints have been gradually eroded, such that now the benefits mostly accrue to the owners, and producers don’t have to take risks.

The creation of private property in ideas by means of intellectual property rights illustrates the book’s core thesis. Those who want to secure for themselves the benefits of economic activity have persuaded law makers to remove the constraints on how their assets might be used. Instead of financing technical innovation, owners of capital can choose to speculate in financial products. In effect the poachers had succeeded in getting control of the law the gamekeepers relied upon to protect the public good. Kingston is not opposed to intellectual property rights. Where information is a commons, it will be destroyed unless the beneficiaries are motivated to protect it. As with other property, it is the assurance enjoyed by private owners that they will be able to reap the benefit of their work and investment that secures their willingness to make the effort. No one will invest in the research needed to generate new ideas for technology unless they can be sure of recovering their costs.

The justification of intellectual property rights by appealing to the public benefit to be had from the assurance that investment in research and development will be allowed recover costs is not so relevant to trademarks or brand names. Secured brand names give big firms a monopolistic advantage for which the recovery of development costs provides no justification. Kingston points out that all the developed countries progressed originally by copying from one another, but that now by working in collusion to prevent the poorer countries from imitating and copying the products of richer countries they are effectively blocking development out of poverty.

Chapter three on the capture of market power powerfully illustrates the case being made: high levels of profit that ‘should only be earned by successful innovations to compensate for the risk of their related investment’ are now being earned by ordinary trading activity involving little or no risk. ‘Since it is innovation that primarily justifies it, capitalism could only last as long as capitalists were denied the power to establish their own working conditions’.

A constant theme throughout the book is the desirability that private property rights be so constrained by legislation that their exercise must benefit the public good. But perhaps the manner in which concern for the public good is taken for granted and not directly addressed in our public discourse is a contributory factor in facilitating the hijack of legislation by vested interests? The absence of literacy about the relation of law to public good makes it easier for those proposing (de-)regulation to formulate their case by concentrating exclusively on the expected benefits to their own operations.

A fascinating example is how accountants made rules to suit themselves. In chapter four, Kingston narrates how the auditing (accountancy) profession succeeded in getting the publicly established standards of best practice changed to standardised box-ticking procedures. This replaced the requirement that professionals exercise personal judgment. As a result, practitioners are freed from personal liability for mistaken judgment. Now all they need do to protect themselves is to demonstrate that required procedures were followed. Another change in standards which had very negative consequences for the public good was the restriction that auditors only had to report actual losses incurred by a bank, and not any expected losses. As a result, auditors were signing off on the accounts of banks which were due to make serious losses and, in some cases, to fail. But the auditors had nothing to answer, they claimed, since they had complied with requirements, a defence which the House of Lords enquiry into the 2009 banking crisis in the UK did not accept, but could do little about. Kingston reports on the self-interested parties succeeding in capturing the law-making processes and shaping the focus of concern.

A major step in the disintegration of capitalism occurred when trading in money began to be treated on the same terms as trading in other commodities. In the modern economy money is created from nothing when banks extend credit to borrowers, a process that the former governor of the Bank of England, Mervyn King, calls ‘alchemy’ (99). What can restrain bankers from irresponsible and reckless lending especially when such activity promises to be profitable both for the bank and its agent? Institutional developments such as the creation of central banks as lenders of last resort have only increased the moral hazard. With the expectation that their risks will be secured ultimately by taxpayers, bankers have no outside restraints on their lending activity. This situation has developed because the benefits of limited liability originally developed for the firms engaged in industry and trade have been extended to banks. Kingston argues that banks should be returned to the stage where they were partnerships with unlimited liability, namely that every partner was liable to the full extent for loans made and debts incurred. Unlimited liability would ensure responsible lending since each lender would have to accept the risk and not assume it could be passed on to the taxpayer.

This book should be required reading for every student of economics, every prospective banker, every civil servant, every candidate for public office, and recommended reading for every citizen. It offers a more nuanced reading of the history of capitalism showing the links between inventors and innovators and those willing to support innovation with their seed money. It offers a realistic appraisal of the role of financial and commercial interests in democratic politics and it shows the vulnerability of politics to manipulation by those pursuing sectional interests instead of common goods. If the deregulation agenda can be reversed somehow, and if constraints can be imposed once again on capital so that it must serve the public interest, this can only be achieved if the countervailing powers of politics and legislation are rescued from sectional interests and voters exercise their vote in the public interest. Such a conscientised electorate will benefit from the analysis of this book.