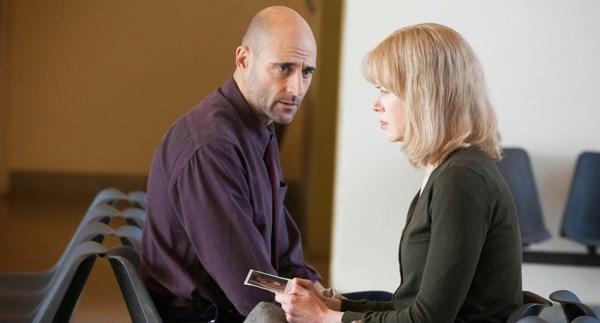 This reflection was very nearly never written. It owes its existence not to any inspiration I gleaned while watching the film, but to the coincidence of my hearing a homily a week later which prompted some thoughts about the nature of memory, and the further chance of my reading something the following day that reinforced those thoughts.

A brief summary of and comment on the film will, I hope, suffice. Nicole Kidman is Christine Lucas, who was involved in an incident ten years before we meet her in which she suffered severe brain trauma. As a result, she wakes up every morning with no memory of her adult life. She then spends her waking hours, with the help of her husband, Ben (Colin Firth) and a physician, Dr Nash (Mark Strong), piecing together what she can of the life she has forgotten through photographs, conversations and a video diary, only to lose it all again when she goes to sleep.

The film is based on S.J. Watson’s 2011 novel of the same name.  Not having read the book, I cannot comment on the success of the adaptation, although my instinct is that television might have been a more suitable medium.  The running time of this film was not sufficient to invest enough in the main characters to root for or against them, or to be genuinely surprised by the twists and turns of the plot. As it is, our perceptions of the three leads yo-yo back and forth far too quickly; and moments that could have been effective cliff-hangers in a TV series are all but forgotten here as soon as the scene changes. The denouement does still come as a dark surprise, although I suspect this was helped along significantly by clever casting.

There is something intrinsic to Christine’s daily routine that is worth reflecting on. Without the structure that memory provides, each day is at once a clean slate and a repetition, and it is at the point where these two meet that there is something meaningful to be said about liturgy.

The homily that I referred to earlier was given by a Jesuit colleague of mine on the feast of the Exaltation of the Cross. He was considering those who question the emphasis on the importance of the Cross, those who would ask why, given that Calvary could only happen once, we re-enact it in every Mass. His response to this was as follows: yes, Calvary did only happen once, so what we do in the Eucharist is not a memory or a repetition of Calvary, nor are we play-acting; it is a participation in the one event.

The following day, I was reading an account by the late Fr Thomas Corbishley SJ about a debate he had with Ian Paisley in 1971. The motion that Fr Corbishley was originally invited to debate was, ‘The Mass, which is a repetition of Christ’s saving work, is the centre of the Christian Faith.’ But Fr Corbishley had other ideas: ‘I wrote back to say that, whilst I should be happy to debate with Dr Paisley, I could not defend the motion as worded, since the Mass is precisely not a repetition of Calvary. I therefore proposed another form: “The Mass is the central act of all true Christian worship.”’

This twofold rejection of the idea of the Mass as a repetition of Calvary has lingered in my thoughts. It is difficult to find enthusiasm for anything that involves repetition – repetition as a learning technique or during exercise, for example, is tiring and can drain our enthusiasm for the task at hand pretty quickly. And so to think of the Mass as repetition can hardly be a way to make ourselves fully present. At the same time, beginning something completely anew can seem daunting and require immense amounts of energy. For all the opportunities offered by a clean slate, not knowing where to start can be inhibiting and presents the danger of going in the wrong direction; and so to come to the Eucharist with a mindset of being able to create whatever meaning we choose for ourselves is equally problematic: it can be overwhelming and/or leave us isolated from the community in which it necessarily takes place.

And so maybe the key to animating our liturgical lives is in knowing that we are not repeating something that has happened before, nor are we launching something new. Each time we come to the Eucharist, we bring ourselves anew – because we will be changed, however slightly, from the last time – to participate through the ritual and community of the Mass in the one event of Calvary.

Returning briefly to Before I Go To Sleep, it is this mix of a daily-refreshed inventiveness and an established pattern that allows Christine to engage in her one life; not to build a new life every day, nor to be confined to endless groundhog days, but to contribute continually to the person she is. It is our mix of creativity and structure that brings us newly to the Eucharist each time and builds the body of the one Church.