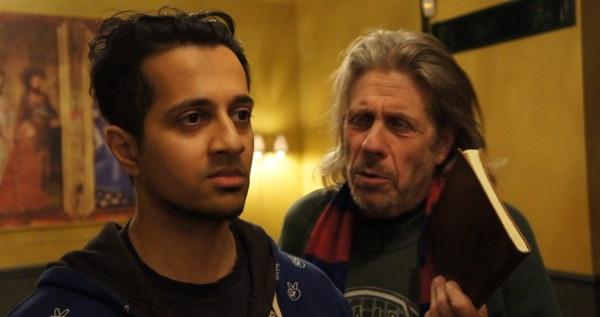 A new play about the life of St Ignatius Loyola opens tonight in London. Thinking Faith’s Editor spoke to Jonathan Moore, writer and director of Iñigo, about the man he is putting on stage and his experience of doing so.  From raucous Basque courtier to the focused, prayerful compiler of the Spiritual Exercises – how does Ignatius’s life story lend itself to dramatic interpretation?

‘Imagination will take you to a greater truth than academia’. According to actor Joseph Fiennes, these words of wisdom were once offered to him by the playwright Tom Stoppard, whose latest play, The Hard Problem, premiered last week at the National Theatre.[i]

That very same message will be conveyed on another London stage, just one and half miles south of the National, for the next four weeks in a new play about the life of St Ignatius Loyola. Iñigo, written and directed by Jonathan Moore, opens on 3 February and runs until 28 February at the White Bear Theatre in Kennington.

Four years in the writing and scrupulously researched, this is neither a history lesson nor a hagiography; instead, Moore wants his audience to meet a ‘flesh and blood, corporeal human being’, flaws and all, a man whom anyone with any experience of Ignatian spirituality will recognise instantly.

‘When you write a play about someone like that, you’re trying to strip away the accretions of history – all the smoke on the painting and all the candlewax that surrounds an icon like [Ignatius] – and to get to the man,’ says Moore, speaking two weeks before the play opens.  And it is as clear from the play itself as it is from talking to the director about his own experience of Ignatius’s Spiritual Exercises, that the man he is putting on stage is someone of whom he is extremely fond.

It is the imaginative approach of Ignatian prayer that appeals so greatly to Moore, and he is keen to highlight in this play the roots in Ignatius’s life of that approach. It has been an interesting process, not least because of the connection that Moore sees between what actors do in the rehearsal room and the process of imaginative contemplation, which is so central to Ignatian spirituality.

‘They’re very different, let’s get that absolutely clear, but the similarities are striking, too, inasmuch as Stanislavski has this thing called sense memory, where you go back and you revisit a feeling that you had when you were a child or something from your past, and then you connect with that feeling again. You can use that feeling to place a scene or a character in the present. To use the imagination like that, and imaginative processes, is a very important thing in Ignatian spirituality. Ignatius himself was never an academic, he would never have seen himself as an intellectual… he had to protect himself [against the Inquisition] and that’s why he [studied], and even then he was never an accomplished theologian. For someone who started life as a kind of macho man from the Basque country, his entire spirituality was then based on feelings and emotion. It’s interesting to me that traditionally we associate – very broadly – men with action, and women tend to be emotional and reflective; but he was very feminine in his way of feeling, his way of connecting with people, in his emotions – he was very sensitive and very tender and noticed things.’

Moore believes that Ignatius was highly influenced by the feminine presences in his life, and so it is no accident that he has been sure to highlight the female characters in a story that has traditionally been male-centred. Ignatius’s relationship with the noblewoman Isabel Roser, one of his great champions to whom he wrote frequently, is central to the play. ‘My thesis is that he actually learnt a lot about the spiritual life from Isabel Roser, that it wasn’t just him teaching her.  In the play I’ve got him giving her the Spiritual Exercises, but also – my idea – she teaches him about the disordered attachment that he has to suffering, the whole idea of corporeal suffering. And it’s a kind of educated guess if you like, it’s a hunch that that would come from Isabel.’

Moore sometimes had to rely on hunches, as he found the incredible brevity of Ignatius’s autobiography frustrating. There is not much detail in there, he says, for a historical dramatist to work with, so he supplemented that with his own readings of letters, witness reports and court documents from Ignatius’s time along with notes from his beatification process. Yes, he wanted to be historically accurate as far as possible; but ‘If I do take liberties with it, I like to know which liberties I’m taking. I might conflate some things….but to bring something to life dramatically, that’s what you need to do.’

At the same time, however, an absence of concrete fact need never be an impediment to writing: ‘This is one of the connections between being an artist and the Ignatian idea: the whole of the writing of any play is an imaginative contemplation.’ That Ignatius is so alive to the ‘what ifs’ and ‘as ifs’ that are the lifeblood of all dramatic endeavours is what has attracted Moore so deeply to Ignatian spirituality – he says that when he first discovered imaginative contemplation as a form of prayer, he thought he was having too much fun to be doing it properly. But he is now fully immersed in Ignatian spirituality, and has even undertaken the 650km Camino Ignaciano.

All of this has helped him to tell a conversion story which, of its very nature, is not easy to put on stage. The brash Iñigo whom we meet at the beginning of the play becomes more withdrawn and considered – with the big action at the beginning, the story follows the opposite trajectory of natural drama. ‘He becomes more and more shy and monosyllabic as the play goes on, and I’ve tried to capture that because clearly there’s a paradox at the heart of setting an introvert on stage.’

Capture this he does.  He subtly invokes the spirit of Henry V – a classic dramatic example of a wild child-turned-good – not once but twice, and in doing so he demonstrates effectively the essence of Ignatius’s conversion. He puts on the lips of Ignatius a speech which echoes Henry’s ‘Once more unto the breach’, but it is used here to capture the spirit of the pre-conversion hero, rather than to showcase his reconfigured glory – opposite, then, to its Shakespearian function. Yet later in the play, this speech is mirrored but for quite different effect: an altogether less militant Ignatius appropriates his soldiering language and passion to inspire commitment in his desperate companions who fear that their cause has been defeated by those in the Church who are out to get them.

‘He’s saying that “we’ve got to be a really strong citadel”. He speaks of “the enemy circling”. That’s where he got the language from for the Exercises – one can only use the imagery that one knows from one’s everyday life. And so it was all about fighting and it was all about honour; he was a man of his times. Except now he uses those things to serve others rather than for his own arrogance and needs.’

It is language that will call up, for those audience members well-versed in the Exercises, images of the Two Standards, and Moore hopes that will just be the tip of the iceberg in terms of how those viewers can engage with the play. His cast, he says, embodies the early companions – the wise Favre, gregarious Xavier and tough Bobadilla, of whom Moore is particularly fond – as perfectly as he could have hoped, and he thinks that they will each be instantly recognisable. But it is Iñigo that he wants the audience to understand better through the play, in which the heat and activity of a blacksmith’s forge are a recurring theme: ‘You need the impurities [to forge metal]. It’s a big thing to do, to change the chemical structure of a piece of metal like that, and that’s of course what happens to Iñigo. This is a person who didn’t make a noise when he was having his knee bone sawn off, but wept at the sight of a beggar – that’s how far he’s come. He wore a mask before the conversion experience, as most young men still do.’

‘Let us,’ asks the Chorus at the beginning of Henry V, ‘on your imaginary forces work’.  Jonathan Moore asks exactly the same of his audience as he attempts to peel back Iñigo’s mask.

‘Iñigo’ is at the White Bear Theatre, Kennington until 28 February 2015. Performances on Tuesday to Saturday at 7.30pm, and Sunday at 4 pm. For more information and to book tickets, please visit: http://whitebeartheatre.co.uk/event/details/inigo-by-jonathan-moore/

The creature and the sovereign self