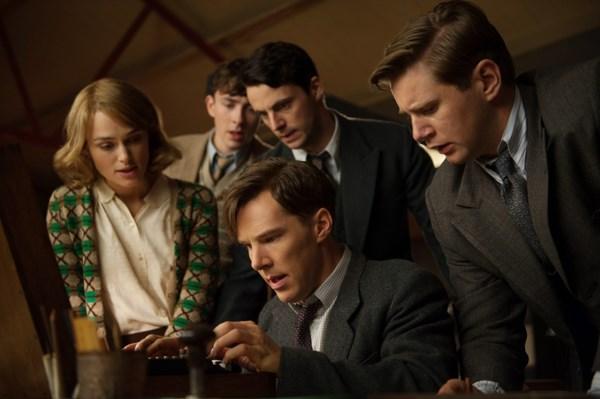 According to G.K. Chesterton, ‘the difference between the poet and the mathematician is that the poet tries to get his head into the heavens while the mathematician tries to get the heavens into his head.’ The biggest flaw in the concept of this well-crafted film is precisely that: mathematics takes place in the head, and rarely does it materialise into anything tangible to awaken the senses.  The Imitation Game therefore struggles to give us anything to lift us into the heights of our imaginations, as the silver screen is capable of doing; instead, one is left with the feeling of having completed a maths exam without being quite sure of what the questions were.

In recent times, the trend has been to depict a mathematician on screen as aloof, insular and inaccessible – a genius at war with himself. In both Good Will Hunting and A Beautiful Mind, the viewer comes away with a respect for the genius but little connection with the character. The Imitation Game is no different.

It illustrates the extraordinary impact that Alan Turing (Benedict Cumberbatch) had on the secretive, code-breaking project at Bletchley Park during the Second World War. The Allies had secured one of the Enigma machines that was being used to encrypt German communications. Turing and a team of highly accomplished mathematicians, chess players and crossword puzzle experts were tasked with – and succeeded in – cracking the uncrackable machine in order to decode Nazi messages.

The film draws three sides of a triangle: Turing’s persecution and alienation in the 1950s as a result of his homosexuality; his years at Bletchley Park; and his school days at Sherborne. However, in none of these threads are Turing’s supposed repression and his angst about his identity addressed properly. One suspects that the box office appeal of Cumberbatch led to the neglect of a more complex and nuanced biopic in favour of a more Meccano-like approach to constructing the story.

Cumberbatch’s Turing is not unlike his highly successful and acclaimed Sherlock Holmes. He plays Turing along similar lines, a genius surrounded by people who do not really understand with whom or what they are dealing. But whereas Sherlock is brazen and unfeeling, Turing is cleverly portrayed with a certain vulnerability. Despite his social failings and direct rudeness, the audience can still empathise with a man struggling to cope with a mathematical conundrum and meet the expectations and timescale of war. Cumberbatch, in his unique style, does his very best to bring the mathematics out of the mind and onto the screen, but balancing an equation which has the integrity of Turing’s genius on one side, and mass appeal and accessibility on the other, proves to be very difficult.

The film has a strong supporting cast. Turing’s recruitment by Commander Alistair Denniston (Charles Dance) and MI6 operative Stuart Menzies (Mark Strong) oozes British determination and value-based judgment: both actors shine with cool detachment and stiff upper lip conformity. Turing’s relationship with his colleagues, most notably ladies’ man Hugh Alexander (Mathew Goode) and Scot John Cairncross (Allen Leech), is fraught and uncomfortable. They acknowledge his genius begrudgingly, but insist that they too had gifts and talents that were taken for granted or not recognised – a point which is clumsily reinforced by the fact that they are sidelined in the film.

Turing’s relationship with fellow code-breaker Joan Clarke (Keira Knightley) brings the warmth, humanity and likeability to the characters. Knightley plays the bluestocking, double-first mathematician very well, but is lumbered with a rather dated and limp script. She does, however, have the best line in the film when she lambasts Turing for his poor communication skills with his team by saying that she is ‘a woman in a man’s job; I do not have the luxury of being an arse.’

By dipping in and out of three different periods in Turing’s life, the film misses an opportunity to document more of the repressive and violent treatment to which Turing was subjected in the 1950s. Whilst trying to explain to my eleven-year-old son why the state used chemical castration is not an easy way to exit a cinema, it is perhaps a sign of our modern age that this act of barbarism is now met with incredulity and shock.

Film is one of the most mathematical forms of art, but it has yet to discover the best way to portray and celebrate the purity of the discipline on screen. Yet again, this has been somewhat obscured by the typecasting of mathematician as a contorted genius; even sending in Sherlock Holmes did not succeed in making things elementary.